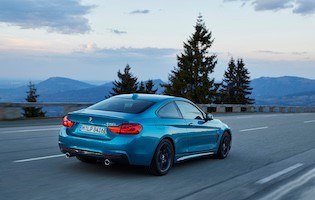 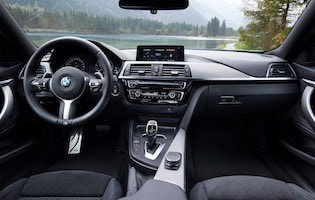 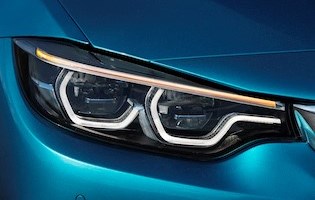 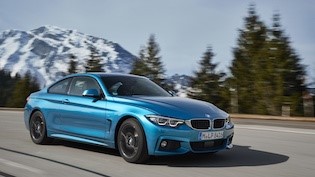 The BMW 4 Series is a concept we're all familiar with now – it's what the German manufacturer has called the coupe variants of its popular 3 Series since it was first launched in 2013. With the new 440i, changes seem to be few and far between, with only a handful of subtle aesthetic changes differentiating the new model from the old – at least from a visual point of view.

Updates include new LED headlights and taillights, as well as a slightly revised bumper design. While the changes may not be hugely obvious, they do help freshen the 4 Series up and keep it looking relevant next to rivals from Audi and Mercedes. It has a great presence on the road, without being too overstated and shouty.

In the cabin, it's business as usual. The 440i's cabin feels every bit the high-quality place its £43,430 price tag suggests it should. There's three new upholstery colours to choose from, and while there are some scratchy plastics hidden lower down, overall, the BMW's cabin is a lovely place to sit.

Under the skin, BMW's engineers have fettled the 440i's chassis in a bid to improve handling, while the car's excellent 3.0-litre straight six remains unchanged. This is no bad thing, however, as the 322bhp power plant is an absolute joy.

Out on the road, the 440i is a thrill. It's rapid when you want it to be – sprinting from 0 to 60mph in five seconds flat – but it also settles in to motorway cruising with ease. Through the corners, the car feels planted, and light, direct steering means you can point the front end where you want it with confidence.

Our verdict on the BMW 440i M Sport Coupe

The BMW 440i coupe is certainly a car that has a lot going for it. It looks great, in a sort of understated, Q-car sort of way, drives fantastically and is properly quick. Sure, its two-door layout may not be hugely practical for family buyers, and its seats can be uncomfortable at times, but at the end of the day, the BMW 440i Coupe is a hugely desirable car.

The BMW 440i isn't going to be the cheapest car to run. Although BMW claims its 3.0-litre straight-six can manage a combined fuel economy figure of 38.2mpg, it's unlikely you'll get anywhere near this in reality.

Front seat passengers won't have anything to complain about as far as space is concerned in the 440i Coupe. However, the same can't quite be said of the back seats, unfortunately. Thanks to the coupe's low roofline, headspace will be compromised, while the two-door configuration cuts into rear legroom as well. Boot space is plentiful for a car of this size, with the BMW offering customers a respectable 425 litres of storage space.

The BMW 440i Coupe benefits from the fantastic multimedia system that is found in the larger 5 Series saloon. An 8.8-inch high-resolution display sits atop the dash, which can be operated via a rotary selector on the centre console or by touching the screen itself. All information displayed on the screen – from sat nav to the audio player – is clear and easy to read.

This is where the BMW falls down slightly. While it's composed on the road and relatively quiet when cruising on the motorway, its seats are somewhat unforgiving, and can leave you with a rather stiff back after an extended period of time at the wheel. Adult passengers will also find sitting in the back seats a rather uncomfortable experience, owing to the swooping roofline and limited legroom.

As you would expect from a modern car, all the basic security measures – including remote central locking and an immobiliser – are in place to help make unauthorised access that much more difficult. One issue that owners might find, however, is that the 440i may attract attention if left parked on the street thanks to its premium BMW badging. For the majority of owners, though, this won't be a problem.

Unfortunately, the latest BMW 4 Series has not yet been crash-tested by Euro NCAP, so a definitive safety rating is unavailable. However, considering the fact that other models in the BMW line-up tend to be awarded the full five-star rating, it's unlikely the 4 Series will be given anything less. One aspect that might negatively affect the 4 Series' safety rating is the fact that many of its semi-autonomous safety features, such as preventative pedestrian protection and city collision management are only available as options.

As far as driver appeal is concerned, the BMW 440i ticks all the right boxes. The 3.0-litre straight-six engine is magnificent, combining impressive performance with an addictive soundtrack, and you'll soon find yourself putting your foot down at any opportunity. Through the bends, the 440i also stays impressively composed. The steering may not have huge amounts of feedback, but it's direct and makes it easy to point the car where you want it.

The BMW 440i wouldn't be easy to recommend as a family car either, owing to its largely impractical two-door layout. While small children will be able to fit in the back seats with relative ease, those after the coupe-style looks but without the compromises to practicality would be advised to opt for the four-door BMW 440i Gran Coupe instead. The 440i Coupe would be more suitable for buyers who don't have children, or those whose children have left home.

Who wouldn't want a powerful six-cylinder BMW as their first car? While the idea of owning a 440i might seem like a great idea, in reality it would be far too expensive, far too powerful and far too costly for a learner driver to insure to make it a serious choice. BMW itself says this is a car targeted at people aged 40–50, rather than those in their late teens or early twenties.

It's hard to deny – the BMW 440i Coupe is a handsome-looking thing. Its sleek lines and athletic stance lend it a purposeful, yet understated presence on the road, and it certainly looks every part the premium product. The same can be said of the interior, which has been appointed with an array of high-quality fixtures and materials. This is every bit the upmarket sports coupe you would expect from the £43,430 price tag.

One of the sacrifices that comes with owning a two-door coupe is the fact that access to the backseats does become somewhat impeded. That said, the seats aren't really suitable for adults on longer trips, and children won't have much trouble squeezing themselves in to the back of the car. Accessibility to the front seats is good, although the car does sit quite low, meaning some might have trouble lowering themselves down into the seats.

The 440i has some seriously impressive in-car technology available. There's the BMW Professional media package as standard, which includes an 8.8-inch high-resolution touchscreen display, satellite navigation and smartphone connectivity. This system not only looks fantastic, but is very responsive and easy to use as well. Audiophiles will find the stereo system is also rather competent, and can easily fill the cabin with high-quality sound.

Rather surprisingly for a German manufacturer, BMW offers its new 440i Coupe in a range of vibrant, eye-catching colours – rather than the usual array of sober, dull greys and silvers. While the latter is still available, there is also an attractive new Snapper Rocks Blue, as well as Melbourne Red. The 440i is available in two trim levels in the UK – Sport and M Sport.

Although you sit quite low down in the 440i, parking won't cause much too much stress. Visibility out of the cabin is commendable, and customers can make parking that much easier for themselves by specifying the optional Advanced Parking package, which includes a reversing camera as well as Park Assist – which can even park the car for you. However, this convenience does come at a price – £545 to be precise.