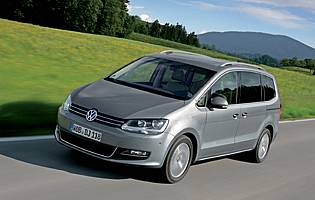 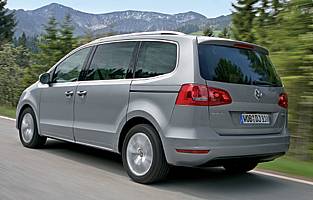 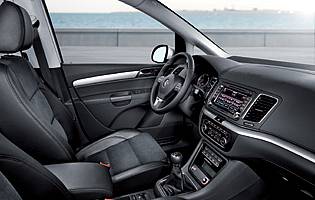 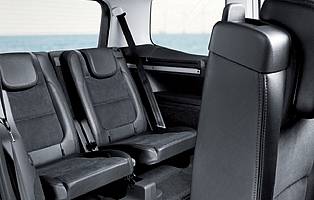 First unveiled in 1995 and having been quietly plugging away in the MPV sector using the same basic architecture across two generations, the Volkswagen Sharan was certainly due a revamp. The new model brings an all new configuration and some fresh ideas to Volkswagen's MPV campaign.

Having used the same platform and only revised versions of the same body since 1995, the Volkswagen Sharan was among the most likely contenders for an upgrade. The new model has finally arrived with a shape and style that conforms to the Volkswagen design ethos, some fresh practical elements and making use of the latest generation of Volkswagen engines.

Available with the excellent 1.4-litre TSI unit, a more powerful 2.0-litre petrol turbo and two versions of the 2.0-litre TDI unit, the Sharan offers start-stop technology across the range to excellent effect. A choice of six-speed manual or six-speed DSG (standard for the 197bhp petrol version) transmissions will tempt families and professional drivers alike.

Slightly longer and wider but fractionally lower than the outgoing model, the new Sharan boasts a less van-like profile. Inside, customers can opt fo six or seven seats, with all variants offering a huge degree of practicality and versatility in terms of seating and luggage arrangements.

Sliding rear doors also make there debut on the spacious new Sharan model. As customers will expect from the borderline premium Volkswagen brand, a range of options are available across the three-trim level line-up including a power function for the side doors and tailgate and an upgraded version of the automated parking system, which can now deal with right-angle spaces, too.

Our verdict on the Volkswagen Sharan 2.0 TDI CR SEL 7-seater

An enticing package for families and professional people-movers alike, the new Sharan brings more up-to-date styling and thinking to the Volkswagen MPV range. The sliding rear doors are a key feature and the economy achieved through stop-start is an additional bonus. The reserved styling is as hard to dislike as it is to get excited about, and the practicality will win many fans.

Volkswagen models are under-cut in price by some rivals, but traditionally strong residual values help take op some of the slack. The efficient 2.0-litre TDI unit offers good fuel returns, aided by the standard stop-start system. Insurance groupings should be reasonable, but run flat tyres will not be cheap to replace.

A very capacious body with an adaptable interior means the Sharan scores highly for practicality. The seats can be folded in many configurations to offer different seating and luggage combinations. Individual seats can also be moved to provide greater legroom for those behind. Unlike some part-time seven-seaters, the Sharan is capable of accepting adults comfortably in its additional row. In the front, storage options are plentiful, with an additional glovebox in the central dash-top.

The effort put into making the centre console as easy to use as possible has paid off with an intuitive layout boasting large, easy to reach and locate buttons. Additional controls are present on the steering wheel for audio functions in SEL specification. The gear selector has also been positioned for utmost convenience. Steering is direct and intelligently weighted to offer a degree of feedback with a light feel around town. The instrument binnacle itself is neatly styled and easy to read, with a crisp white-on-black information display.

Ride quality is good regardless of the presence of an adaptive chassis and despite the standard run-flat tyres. Contoured seats for all seven passengers aid comfort and climate control is standard equipment. In the front, the dash assembly has been designed for ease of use, to noticeable effect.

Keyless entry is available to compliment the basic alarm and immobiliser system. Inside, lockable storage is a bonus, and a removable rear luggage cover is available to keep boot stored items out of sight.

Seven airbags, including one for the driver's knee, and Isofix child seat mounting points with a Top Tether system in the second and third row will appease parents. Belt tensioners are also available for the second row of seats, accompanying the standard application in the front. Parents can opt for a seatbelt warning system that gives a visual display of who's latched in. Power sliding doors boast an anti-pinch feature and ESP is standard.

The 138bhp version of the 2.0-litre diesel engine offers an excellent middle ground, with more than enough power and torque to pull a full quotient of passengers but impressive fuel consumption and incentivisingly low emissions. Volkswagen has worked hard on the chassis and body to deliver rigidity, making for a responsive and predictable MPV. Adaptive chassis control makes it debut on the Sharan, allowing drivers to choose between sport, normal and comfort modes - but the effect is minimal. The DSG gearbox works superbly as part of the competent and relaxing package.

The Sharan makes an excellent family car. Although available as a six-seater for professional use it's the seven-seat variant that will boast the most family appeal. With ability to fold the rear seats flat the seven-seat model makes by far the most sense. The sliding doors and practical interior add to the family appeal. It's a car capable of growing with families and sensible running costs should also prove attractive.

The Sharan makes an unlikely choice as a first car, being better suited to families or professional use such as taxi driving.

Volkswagen's reputation for building strong, reliable and well finished cars is excellent and the Sharan is unlikely to do this any damage. Impeccably put together inside and out it has a feeling of solidity. The reserved styling is unlikely to turn heads however, and it feels a little plain inside too, particularly in darker interior shades.

The sliding rear doors, which can be upgraded to powered versions if required, take accessibility to another level in the Sharan - offering a huge portal and allowing entry and exit from tighter spaces. The second row of seats has been designed to fold forward a good distance with minimal effort, aiding access to the third row. The boot door is also a healthy size.

The basic four-speaker CD and radio audio system can be upgraded to include a touchscreen sat-nav and multimedia system common to the Volkswagen range. Easy to operate and, in the Sharan, carefully positioned for ease of use. The wheel-mounted audio controls of the SEL model are an additional benefit.

Smart but somewhat uninspiring, the Sharan exterior looks best in silvers and greys. Fortunately, of the nine colour options available, five are just that. Brown, black, blue and white are also options. The standard cloth trim is of a durable quality but the SEL model benefits from Alcantara seat trim and a touch of leather, as well as chrome exterior trim and 17-inch alloy wheels.

Although the A-pillars restrict front visibility through corners to a degree, visibility around the body poses few problems. The Sharan is a reasonably long vehicle but its uniform shape makes it easy to place. Volkswagen has developed its automated parking system further to allow it to slot the car into spaces at right angles, as well as parallel park. It is, of course, a cost option.

Mazda5 The most adaptable interior on the market