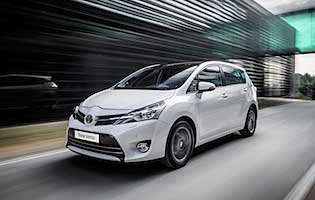 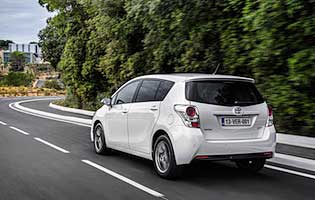 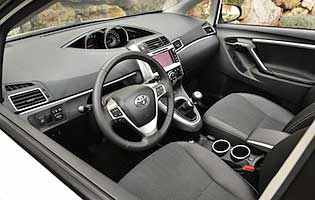 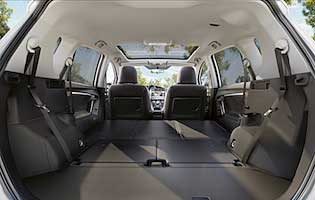 The usual European marques might be more famous for their medium and large people carriers, but Japanese firms like Toyota have been successfully plugging away with their own flavor of MPVs for years. Toyota's heavily revised Verso is an example of something that gives the Euro bunch a run for their money.

Although it may not be as widespread as its European rivals, the latest version of Toyota's Verso has clearly been envisaged as a seven-seater people carrier right from the off. A freshly styled body incorporating the new Toyota styling cues give the model greater presence and a more distinct look, but also aid aerodynamics as part of the brand's Optimal Drive programme.

The engines reflect the Optimal Drive strategy too, with improved fuel efficiency and lowered emissions from the pair of petrol units and sole diesel option. Manual transmission is the default option here, while Toyota's choice of a continuously variable transmission (CVT) as the auto option is an unusual one.

Key to the car's appeal is its versatile cabin. The Verso's collapsible seats are individually adjustable making the model extremely practical. A strong focus on family friendliness sees copious storage options and the cabin has been arranged to make driving as relaxing as possible.

And while the Verso has never been looked on as a driver's car, this version promises a more engaging experience thanks to a comprehensive update programme. Designed with developed more with European buyers in mind, body stiffness and suspension improvements should see the car get closer to that of its main European rivals.

Our verdict on the Toyota Verso Icon 2.0 D-4D

There's no doubt that its new family face this Verso is a more visually appealing proposition. Toyota hopes the attraction will be more than skin deep, however, with the numerous engineering changes and the Verso's already proven cabin versatility ensuring it reaches a wider audience this time around.

Toyota's Optimal Drive programme means it attempts to maximise the fuel efficiency of all of its models, and the Verso is no exception. Diesel power should be your first choice if you're a demanding user, while short runs with light loads better complement the petrol engines. Toyota reliability ought to keep servicing and maintenance costs down.

Although able to operate as a permanent seven-seater, the individually adjustable seats in the Verso mean it can also be used as a six, five, four or three-seater or even a van. Folding and raising the seats is a simple operation. The presence of cubbyholes plus trays under the floor for the rear rows and a good size glovebox makes the model a very practical family vehicle. The only downside is a lack of luggage space with the third row in place.

The Verso's electric power steering, adjustable steering column, light pedals and conveniently positioned gear lever mean the controls are well suited to a relaxed driving style. Most of the minor controls are intuitive, while audio buttons are present on the steering wheel and gearshift paddles are also present for the Multdrive S transmission.

With a spacious and highly adjustable interior, the Verso represents a comfortable way to transport up to seven people. Equipment levels rise with specification, but even the base model is well equipped. One the move road and engine noise is pleasingly subdued.

Perimeter protection is included as standard as part of the Verso's comprehensive, Thatcham Category one approved alarm. An electric steering lock and key deactivated immobiliser also aid security. Concealed storage in the boot and in trays under the seats is great for concealing valuables.

The Verso boasts a comprehensive array of electronic safety systems, such traction control, hill-start assist and ABS with EBD. Seven airbags are standard, as are anti-whiplash headrests. Naturally, the Verso's chassis and shell are designed to offer as much protection as possible in the event of a crash.

Clearly the Verso isn't intended to offer racecar performance, but tweaks to this generation have improved the experience noticeably, resulting in a cosseting and refined ride. The petrol variant, particularly in combination with the smooth CVT gearbox makes for relaxed progress thanks to very progressive power delivery. The 2.0-litre diesel is no less pleasant if a little noisier, and most of its thrust can be found low down in the rev range.

A great asset for a family of up to seven, the Verso is also a highly practical car for families with fewer children. The collapsible seats are always available when required but when not, simply fold out of sight. With a footprint no larger than that of a medium-sized family hatchback the Verso is a very versatile machine.

Unless boasting a houseful of children at a young age or operating a mini-bus service, it is unlikely that young drivers will find much in the Toyota Verso to meet their needs or desires as this model is aimed directly at families.

Few manufacturers can boast a reliability record as impeccable as Toyota's and build quality and reliability is rarely in doubt with any of the manufacturer's products. Interior plastics are not necessarily of the highest quality, but they are robust and well assembled. The new model's smarter styling helps add a little glamour.

A highly accessible model thanks to well-proportioned doors and a sensible floor height, the Verso should pose no problems for even the least flexible. The rearmost seats are predictably less accessible, but the easily adjusted second row offers better access than might be imagined. The boot door, although not particularly deep, is wide and the load space level for easy access.

The standard unit does a good job of filling the large cabin. Bluetooth is also present along with an additional input for an MP3 player. Sat-nav is an option and the system is intuitive and hassle-free to operate with clearly labeled controls.

This latest generation Toyota Verso looks good across the range of available colours. Inside, there's a lot of plastic on show, but Toyota has attempted to liven up an otherwise bland fascia by using a mixture of light and dark shades and some metal effect trim, which works to an extent.

The Verso is a largely square shape, making it easy to judge its proportions. The turning circle is adequate and the steering light at low speed. Top spec models have a rear-facing camera to make life that bit easier.