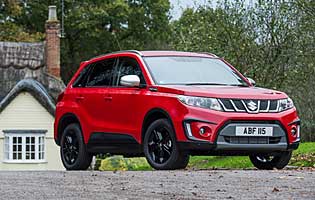 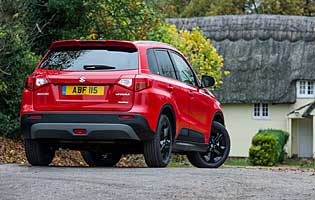 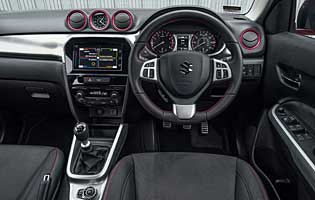 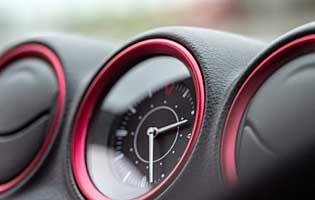 Suzuki is dipping a toe into the future with a standalone model that uses an all-new turbocharged engine for the first time. As the sportier, more stylish of the two compact crossovers Suzuki makes, the Vitara was the ideal platform for the 1.4-litre BoosterJet engine's debut. In time it may widely replace the 1.6 normally aspirated petrol engine.

The Vitara S is a one-engine, one-trim model with its own selection of paint colours and special bodywork changes. Among them is a more angular, striking front grille, framed by the same LED projector headlights as the existing SZ5 model but with red accents instead of blue. There is a roof spoiler above the tailgate, emphasising the S's higher performance.

This is the first time the 1.4-litre turbocharged engine has been used in a production car and will form the basis of a new family of engines along with the 1.0-litre BoosterJet unit fitted to the 2016 Baleno hatchback. It has much greater torque than the existing petrol engine and uses it to its advantage on the road.

The engine is also slightly more economical than the 1.6, but only if it is driven extremely gently. Elsewhere, upholstery changes and new interior trim inserts in a deep metallic-effect cherry pink mark the S out from its siblings. The same useful twin-layer boot and large door pockets remain for practicality's sake.

Suzuki is aiming the range-topping S at buyers whose hearts want a five-door Swift Sport but whose heads know they need more space and versatility than the supermini offers. The lightweight Vitara proves brisk and nimble on the road, offering a genuinely excellent option for buyers stuck between youth and responsibility.

Our verdict on the Suzuki Vitara S

While the visual changes on the S are a matter of taste, the engine is clearly an upgrade. Much-improved pulling power leaves drivers more satisfied, while the more distinctive looks add sportiness. Most crossovers simply don't deliver much driving pleasure but the Vitara S does, and that sets it apart from the mainstream.

The price gap from the petrol SZ5 to this is quite modest, and it actually comes out cheaper than the diesel version. Importantly, it is still much cheaper than its main rivals, and those smaller cars that come in less expensive are less practical and significantly worse value for money. The petrol models are a little behind the best for emissions and road tax, but the purchase price more than offsets this.

Bigger boots can be found among some of the Vitara's rivals, but this one is big enough for most people. It has a movable floor that can either sit flush with the load lip or right at the base of the boot for maximum capacity. It can also be removed. Inside the cabin the storage between the two front seats is impressively spacious, but an odd intrusion into the space means it's not as practical as it could be.

While the standard Vitara has plain grey dials with white numbers and needles, the S adds coloured rim accents around the analogue speedometer and rev counter, in the same deep cherry pink as the dashboard trim inserts. The main interface screen is the same as is used on the rest of the Vitara range. It is bright, with high contrast and fresh colour themes.

Plentiful adjustment in the driving position means the driver should always find the right position for them. The gear lever is set at an ideal height for comfortable shifting to all six ratios plus reverse. It takes a very long stint behind the wheel to reach the limits of comfort in the front seats. The rears are straighter-backed but with highly adjustable head rests.

Privacy glass is one of the things the S shares with the high-spec SZ5 model. However, it loses the heavy panoramic sunroof for the sake of handling, and this does remove one potential entry point for thieves. The fuel filler cap locks automatically and is only released via a lever inside the cabin. Central locking with deadlocks is standard, as per consumer expectations, and the fuel filler cap locks with the central locking. A storage bin between the two front seats adds to the covered space and increases security, allowing small valuables to be kept out of sight.

The S uses a special Radar Brake Support system that actively scans the road and detects an impending crash, applying the brakes to their fullest if the driver doesn't press the pedal hard enough. The system can actually prevent low-speed bumps, while mitigating high-speed impacts. Adaptive cruise control will, once activated, prevent the car from getting too close to the vehicle in front, slowing down as necessary and speeding up to a maximum pre-set speed as defined by the driver.

The low-inertia fizz of the 1.6 petrol is still there, for the most part, but the 1.4 BoosterJet adds a significant amount of torque from very low revs, with an especially large boost in the midrange between 3,000rpm and 5,000rpm. Linked to the Vitara's inherent balance and accurate steering, this model can give much more focused cars a run for their money along twisty roads. It doesn't roll too much, it absorbs nasty bumps with aplomb and the primary controls are all blessed with a weighty, substantial feel that delivers a sense of sturdiness and stability.

The Vitara S combines greater pace than the marvellous Swift Sport with the family-friendly nature of a mid-sized crossover. It may not have a big enough boot for some families but the legroom and seat height are about ideal for children. There's a good view out for kids in the rear seats, but they might prefer the brighter colours of the SZ5 model. Families who want a high-riding car that looks good and offers a lot of luxury for a reasonable outlay will find the Vitara just about perfect.

There is no reason why the Vitara wouldn't make a suitable first car other than the fact that it's actually quite quick; certainly compared to a typical learner's car. The raised driving position inspires confidence and the reversing camera adds a safety net for manoeuvres. However, it's expensive, and insurance will be significantly more expensive than for a normal small hatchback.

While there are one or two areas where the plastics quality should be improved, the Vitara's distinctive and muscular styling gives it a strong look that belies its compact size and light weight. On the other hand, that low weight has been achieved by using thin plastics for door trims and so on, and these can flex under pressure where those of a more expensive car might not. The model is undeniably growing in popularity, though.

There is a lot of adjustment in the driver's seat, including height. That allows drivers of most heights to set a comfortable position for getting in and out. All the doors open nice and wide, though, giving passengers and driver alike instantly good access. The front door apertures are more forgiving than the rears, which have been shrunk compared to the SX4 S-Cross'. Also worthy of note is the particularly light tailgate, which allows easy one-handed operation for when carrying heavy shopping or a child.

There is no change in the Vitara S's stereo equipment, meaning speakers in both the front and rear doors as well as tweeters for higher frequency notes placed closer to head height. Occupants can choose to hook their media player up to the car via USB, an old-fashioned auxiliary lead or even Bluetooth. Digital radio is standard, with an FM/AM system to back it up.

A meagre four colour options are available for the Vitara S, with three monochrome metallics and a solid red, which in combination with the standard black alloy wheels makes the best option. Each shade reflects the slightly sportier positioning of this model versus the similarly high-spec SZ5. The S has unique upholstery, which is perhaps less grippy than that of the SZ5 but is smoother and may resist wear and tear for longer.

The S shares the same parking aids as the SZ5 on which it's based. There are parking sensors at both ends and a very useful reversing camera that gives a broad view behind the car. The Vitara is not a large car, though, sized between the likes of Nissan's Juke and Qashqai, so it slots into parking spaces easily. Parallel parking is no problem thanks to a good steering lock and wheels placed towards each corner.

Vauxhall Mokka Popular and good-looking, the Mokka gives a high driving position but not much space

Skoda Yeti The only crossover that can match the Vitara S for fun, but is larger and more expensive