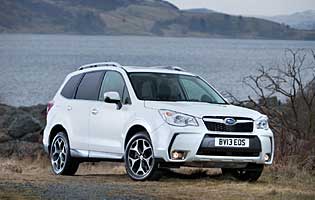 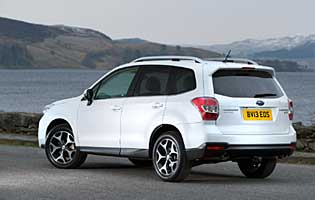 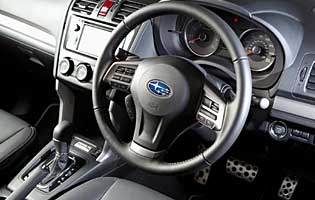 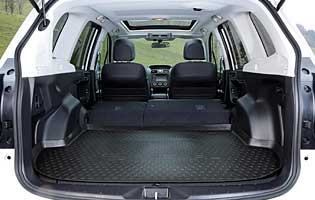 Subaru's latest generation Forester, which aims to build on the success of previous versions while acknowledging the changing marketplace, offers prospective buyers a more traditional SUV experience. What hasn't changed is the inclusion of Subaru's trademark all-wheel drive and boxer engine technologies..

Noticeably different inside and out from the model its replaces, the transformation from high-riding estate car to fully-fledged sports utility vehicle appears complete. Taller and, overall, a much larger car than previously, the Forester is pitched towards active families and those seeking a refined workhorse.

Mechanically the Forester shares a platform with the Impreza, which allows the SUV to benefit from proven engine and all-wheel drive technology. Diesel and petrol variants differ slightly in their performance, with the auto gearbox equipped high performance petrol model boasting the more sophisticated intelligent four-wheel drive and hill descent modes.

Keen to silence critics unhappy with previous iterations of the Forester, Subaru has put a lot of effort into the quality and ambience of its Forester. High quality plastics are in evidence in the cabin, while the change in body dimensions has also freed up a considerable amount of extra space. The Forester is able to accommodate five passengers and luggage in greater comfort than before.

Continuing Subaru's left-field approach to motoring, the Japanese firm continues to offer its flat-four cylinder 'Boxer' diesel engine alongside a regular and turbocharged petrol units. Fans of auto gearboxes will be surprised to see Subaru opt for a continuously variable transmission (CVT), but the end result is a surprisingly accomplished performance.

Our verdict on the Subaru Forester 2.0D XC

Subaru's decision to follow the herd and transform its Forester from a rugged, niche estate car into a conventional sports utility vehicle is a reflection on where the leisure vehicle market is heading. Globally the 'soft-roader' market is booming, and it would have been remiss of Subaru to ignore such a trend. However, the Forester is far from soft, as it boasts enough technology and talent to tackle off-road hazards with more skill than many of its rivals.

The Forester isn't going to be as frugal or as economical to run as some more advanced SUVs, but on balance you'll be paying less for some of the mid-spec models. Also in your favour is Subaru's generosity in the standard equipment department. And it goes without saying that the diesel variant delivers the most wallet-friendly ownership experience.

The Forester makes the most of its enlarged dimensions with good levels of space for occupants front and rear. In practical terms there are a few storage areas dotted throughout the cabin, but not as many as some rivals which do a better job of replicating MPV levels of practicality. That said, the optional powered tailgate, expansive load floor and easy-fold rear seats go a long way to redressing the balance.

The layout of the Forester's cabin boasts a clean and efficient look plus a simple layout. The instruments have a high quality appearance, while the main controls are easy to operate and mounted within close reach on the centre console. The slight mismatch of the aftermarket navigation unit in the middle-ranking car is resolved with the appearance of a Subaru-branded unit in the flagship car.

The Forester scores well in this area, particularly with its accomplished ride. Even poorly surfaced roads are absorbed with little fuss. Elsewhere, refinement is decent although there is a little wind noise and the engine noise filters through at higher revs.

Foresters come with a comprehensive anti-theft system as standard, which should deter most thieves. In addition, the Subaru-branded navigation unit is unlikely to fit into other vehicles, lessening its theft appeal. The model dependent inclusion of a keyless go system should reduce the need for fumbling for your keys to unlock the car - especially useful when in poorly lit areas.

As with so many modern cars, the Forester comes with numerous airbags plus a full complement of electronic traction and stability systems. This is on top of the car's standard-fit all-wheel drive system, which can help in all weathers - not just when you're in a muddy field.

The Forester's controls are generally smooth and accurate, but most notable is the car's entertaining handling. Whilst remaining safe and secure with stability control turned on, the chassis does allow a large amount of freedom. Although the suspension is relatively soft it keeps the car under good control. The turbo petrol motor isn't short of performance, although the same isn't true of low power petrol unit. The diesel alternative strikes a reasonable balance but it also needs to be hustled along if you wish to make progress.

The Forester is well suited to family life with a good view out from all seats and sufficient boot space to carry pushchairs, car seats and belongings for activity-themed weekends away. Families will find the Forester more than capable of coping with everyday life, and with its all-wheel drive it's equally at home away from the Tarmac.

The Forester is unlikely to appeal to first time drivers due to its above average purchase price and running costs, although it would present no particular challenge to a novice as it's an easy car to drive.

This generation of Forester does much to improve on the car's previously average performance in this area. The choice of cabin materials is good and quality is more than acceptable now, to the point that it's hard to find any serious failings. Furthermore, the Forester's image is strong, building on a good reputation for reliability and competence - especially when off the beaten track.

The Forester's generous dimensions make gaining access to the cabin straightforward, with large doors front and rear. The same can be said for the tailgate, which opens to reveal a large aperture. Where fitted, a powered option for the tailgate allows owners to set different heights to avoid low ceilings in car parks or garages.

The Forester comes with a good quality audio system as standard, including the now expected radio, CD and MP3 player compatibility. Move up the range and an aftermarket navigation and audio unit is available, which does the job but doesn't still well with the rest of the otherwise stylish cabin. Only the flagship model gains a Subaru branded infotainment system, and proves a wise choice if you value ease of use.

An improvement over the previous generation car, the Forester's cabin boasts a pleasing mix of dark plastics and light trim accents. The trim itself is of a reasonable quality, although it is a little less impressive than its key rivals. Both the cloth and leather upholstery choices look and feel durable, though.

For a car of its size, the Forester is simple to park. The high driving position offers good all round visibility and makes it easy to judge where the extremities lie. The power steering is also finger-light at low speeds, while the parking aids to a good job of taking the guesswork out of any manoeuvres.