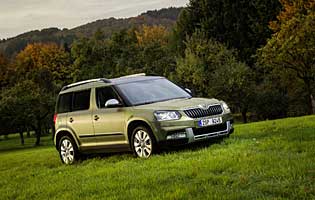 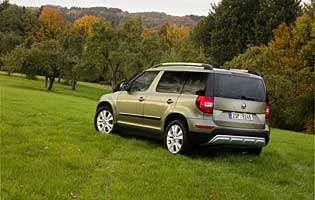 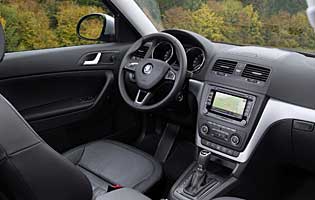 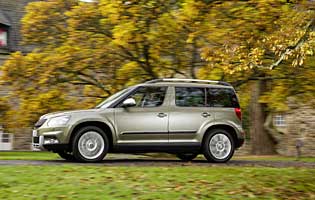 Skoda broke the mould when it introduced the Yeti, a compact crossover that mixed elements of the SUV, family hatch and MPV. The combination of a high driving position, car-like driving dynamics and a spacious, versatile interior made it a very popular choice. Now Skoda has revised the Yeti, with detail enhancements and specification changes to enhance its appeal.

The key idea behind the Yeti hasn't changed, in that it will satisfy the needs of a range of drivers by combining the visual toughness of a 4x4 with the practicality and ease of use of a regular hatchback while avoiding the compromises of both.

The basic silhouette of the car hasn't changed either, but there are now body-coloured panels, new lights front and rear and a new grille design to distinguish it from the outgoing car. Even the distinctive round fog lights have been swapped for rectangular items. In the process the Yeti looks more discreet and sensible, and some will miss the more distinctive appearance of the outgoing car.

Underneath the skin the Yeti remains largely as before. The most notable inclusion is the availability of two and four-wheel drive versions, allowing the buyer to tailor the car to their precise needs. There are two petrol engines and three diesel options, although only the two least-powerful engines can be specified in two-wheel drive form.

On 4x4 models drive is taken to all four-wheels by the Haldex clutch system, which in the latest Yeti is the updated fifth-generation of the system. Drive is diverted to the rear wheels when accelerating from rest or in slippery conditions while at higher speeds or when parking, drive is mainly sent to the front. Fuel consumption and emissions have been improved over the outgoing model thanks to the improvements in the Haldex system.

That so little of the Yeti has changed in this facelifted model is a testament to the excellence of the original. There's so much to like about the Yeti; its unique looks, the excellent practicality, smooth and comfortable driving experience or the value for money. This updated versions offers measured rather than dramatic improvements, but it's still arguably the pick of the bunch.

Depending on the engine and transmission choices the Yeti can deliver remarkably low running costs thanks to its overall efficiency. The on-demand nature of the four-wheel drive system helps to improve economy, while the option of a two-wheel drive version helps this still further.

The Yeti makes excellent use of its footprint, with the tall body giving generous head and legroom for all passengers. The clever folding rear seats allow the full dimensions to be exploited if required and the cabin layout incorporates plenty of storage areas.

The layout of the Yeti is pure Skoda: simple, easy to understand and attractive. The subtle lighting and clearly labelled buttons make the Yeti a car that can be driven and operated with ease and without recourse to the handbook. One demerit is that the markings of the speedometer and tachometer are very similar, which means they can be confused at a glance.

Given that the Yeti will spend most of its life in varying conditions, its comfort-biased suspension and high levels of refinement are well judged. It may have off-road ability but there are no comfort compromises on-road and the Yeti will happily swallow large distances and keep its passengers at ease.

All Yeti models are fitted with an alarm and immobiliser system as standard, including interior monitoring and a back-up horn, which should be enough to deter even the most determined thieves.

As with the rest of the Skoda range, the Yeti has a comprehensive list of safety equipment, both active and passive. The security of automatic four-wheel drive and ESP are a great help in avoiding accidents in the first place but, if the worst should happen, six airbags are standard across the range, with a driver's knee airbag added on S models and above.

Although a relatively tall car the Yeti feels like a car from behind the wheel. The driving position is very good with a superior view out compared to conventional cars, while all the major controls are slick and well-weighted. With the mid-output 2.0-litre diesel unit acceleration is quick and effortless, and although tall the Yeti feels capable and controlled through bends.

The Yeti is perfectly suited to family life, with all the practicality that a family could wish for. For instance, the rear row of seats is slightly elevated above those in the rear, giving a better view for passengers. The Yeti is also relatively wide for its size, giving better elbow room and making it easier for passengers to climb aboard.

The Yeti has the style and ease of use that would make it appealing to a new driver and, even though it offers four-wheel drive and good performance, it's far from intimidating. It may be a little expensive for many first-timers however.

Like any Skoda, the Yeti feels a step up in quality over many of its price rivals. Fit and finish throughout the car is impressive and the use of chrome details and neutral illumination are smart touches. Skoda's image has come a long way in the last decade and the Yeti offers such a radical departure it will appeal to buyers outside of the normal Skoda demographic.

Big doors front and rear combined with a high roof and a high seating position make it as easy as possible to climb aboard the Yeti. The same goes for the boot, which has a generous tailgate for easy access.

Even the entry level Yeti gets a radio/CD unit with an impressive level of sound performance. The clear dashboard display is easy to use, while higher specification models include features such as a CD changer, steering-wheel controls and MP3 compatibility.

Because of its slightly unusual looks the Yeti suits a wide range of colours. More sober shades help the Yeti to look smart and discreet but bright whites and bold colours bring out the best in it. On the inside there are new fabric trims and a wider choice of finishes, adding to the upmarket feel.

Thanks to the high seating position and a near-vertical tailgate, the Yeti is an easy car to park for its size. The addition of parking sensors fitted on SE models upwards are a further help, while there is a reversing camera for the first time and the optional Park Assist has been updated so the Yeti can parallel park as well as drive into and out of bay spaces by itself.

All versions get a tyre repair kit and compressor as standard.

Nissan Qashqai Only true crossover rival is fun to drive and practical, soon to be updated