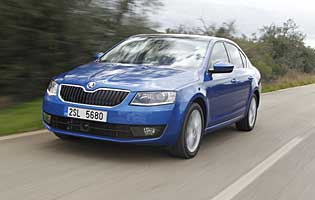 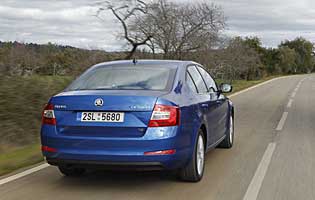 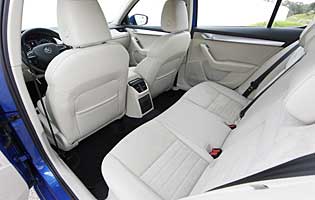 The Octavia is the cornerstone of Skoda's range, being its best-selling car globally and by some margin. This is only the third all-new Octavia since the name's rebirth in 1996 and with sharper looks, a different chassis and larger dimensions the question on many owners' minds is whether the new model is true to its predecessors' roots.

The answer is yes, although with a slight change of emphasis. For the extra 90mm of length it brings, the already cavernous boot only increases marginally while the majority of the new space goes to rear passengers, who now have a mighty amount of space all around them. The Octavia's existing family car credentials have been extended further.

New chassis architecture and rear suspension has made the car significantly lighter across the engine range, with the exact like-for-like difference varying from model to model. That, combined with a familiar but enhanced range of engines has taken the Octavia's efficiency levels higher than ever before and helps to offset the rise in fuel prices since the outgoing model's release.

The Octavia is the latest Skoda to switch to the firm's new boxier, Germanic styling. Other updates include new safety and infotainment technologies that make the car feel fresh. It arrives on the heels of its Volkswagen Golf and Seat Leon cousins but is differentiated most clearly among the three, with easily demonstrable selling points.

Skodas have long been admired for their simple, useful approach to car design and the Octavia makes use of a spectrum of 'Simply Clever' ideas to provide an easier motoring life, like a dedicated smartphone holder, an ice scraper under the fuel cap and a reversible carpet and rubber mat for the boot that's perfect for minimising mess.

Our verdict on the Skoda Octavia 1.6 TDI Elegance

The Octavia's prime function is the same as it has always been and it still provides an awful lot of car for a relatively low cost next to the competition. With more rear legroom it makes a perfect upgrade for growing families with a tired old family hatch, and in utilising key technologies from the Volkswagen Group it pitches itself a notch above most other options for the price.

Fuel efficiency is the main driving force in modern car development, and the Octavia uses its lighter weight to achieve considerably better economy and emissions ratings than its predecessor; ratings that sit among the best in the class. That makes the Octavia temptingly cheap to run as a company car, and its residuals should be strong thanks to its new features and many attributes.

With so much interior space to go around it's no surprise to see that practicality is equally abundant. Cup holders, door pockets, covered storage bins and an ample glove box all provide day-to-day usability, although the six-CD autochanger does take up some of the glove box space. The boot will be familiar to existing Octavia owners, with a fairly square area offering huge practicality and space for lots of family luggage.

As well as the standard touch-screen display in the centre console, the maxi-dot screen between the speedometer and rev counter is now full-colour as standard. Paired with easy to read dials that share the font styles found throughout the car, the displays are lifted from the norm without being overbearing or too heavily styled. The displays echo the relatively youthful, active but sensible and practical nature of the car itself, while controls follow the familiar VW Group layout.

Comfort comes from many areas and on one hand there is plenty of room to stretch out in the Octavia. On the other the ride can get a little jiggly at times, with too many small bumps transmitting vibrations through the suspension and into the cabin. On the larger wheels fitted to this Elegance model bumps can sometimes feel sharper than they should, but the seats themselves are of the opinion-splitting firm type fitted to most VW Group cars of the last decade.

All Octavia models have a Thatcham Category One alarm and an immobiliser, along with remote central locking. S models lack the anti-theft wheel bolts of the SE and Elegance, though. The boot can be unlocked independently without releasing the door locks, and the driver can choose to only unlock the driver's door to prevent certain kinds of car-jacking. There is no privacy glass, but the boot is fully enclosed and keeps items out of sight.

As well as many airbags, the latest passive protection technologies and all the electronic braking and stability aids you would expect of this sort of car, the Octavia offers systems like automatic post-collision braking, automatic emergency braking if the driver fails to react to an impending nose-to-tail collision. There is also automatic low-speed emergency braking and much more to consider. The breadth of safety systems offered would not normally be available on cars at this price.

The Octavia falls close to the median in all aspects of its drive. It certainly benefits from its significant weight loss and the petrol models are the nimbler across twisting roads, but there is generally nothing remarkable about the overall experience. All the engines are smooth and quiet, with everything from stop-start town traffic to motorway cruising within this diesel's capabilities. Only the 2.0-litre diesel offers significant forward thrust, however.

It's doubtful that any other car for this price offers quite so much for the average family. From the capacious boot and rear passenger area to the many 'Simply Clever' everyday usability details the Octavia really impresses as a family car. There are Isofix child seat mounts on both outer rear seats, but given the available space it would have been feasible to add another. As it is, a side-less booster seat can be used in the middle if needed.

Although it might fall down on the typical first car desirability scale, this makes more sense as a first car than it might seem. It's stylish, unintimidating to drive, efficient and cheap to run, with plenty of space for road trips and passengers. The only things counting against it are its size relative to the superminis most learners pass their tests in, the restricted rearward view and the purchase price, which although cheaper than rivals' is still beyond most first-time buyers' reach.

Originally perceived as a budget brand for people who couldn't afford a Volkswagen, Skoda has transformed itself into a brand that people buy into for its own merits. Among the British population it is now one of the more desirable brands of car to drive, and for humble, honest reasons. This generation of Octavia has undoubtedly upped its game in terms of materials quality, but uses an established range of engines with a mixed reliability record.

With much of the new car's additional length going into the wheelbase in between the seats, the rear doors are now longer and offer accessibility not dissimilar to the fronts, and the roof line has been made higher to make access even easier. There are few cars in the compact family hatchback segment that can claim quite such an ease of ingress and egress. The boot, though, has a heavier-than-average tailgate that can be weighty to lift for the first few inches.

For the first time a touch-screen media interface is standard, which brings with it certain advantages and disadvantages. It feels modern and neat, but it can be tricky to use on the move especially over rougher road surfaces. On the other the large colour display handles music tracks and graphics in a much more 21st Century way and without it the Octavia would lag behind its rivals. On all models DAB radio, a USB input socket and Bluetooth are standard.

Not all the colours in which the Octavia is being built will make it to the UK, but there is a good mix of both muted and strong colours, with red and blue well represented among various shades of black, silver and white. The available blues look particularly good on the car's strong lines. The interior trim is a marked step up in quality and style from both the previous Octavia and the smaller, cheaper and simpler Rapid.

On the Elegance model proximity sensors around the car warn that an obstacle is close enough, with a visual representation on the central screen. An Automatic Parking Assistant is optional and can park the car automatically with only throttle and gear inputs from the driver, and it shouldn't have too hard a job because despite the Octavia's impressive interior space it's not too large on the outside for comfort. If parking manually, the high boot line obscures visibility significantly.

Seat Toledo Smaller, but much cheaper and with almost as much luggage space as the Octavia