LED daytime running lights are the key change at the front 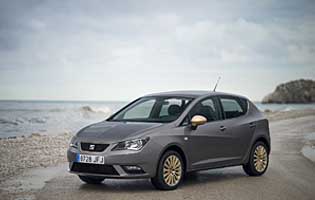 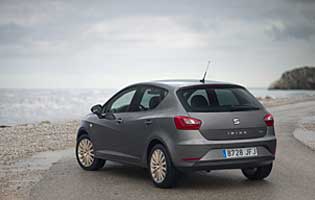 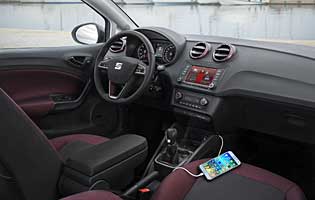 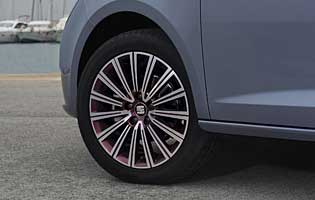 Seat's long-serving Ibiza has been the most popular model in the manufacturer's history, offering good value and reliability with the added bonus of a strong image and a fun driving experience. Now the Ibiza has been revised with detail design changes, improved engines and a wider technology offering.

The Ibiza's shared elements with other superminis in the Volkswagen Group is no longer a big secret, but for Seat the VW parentage has played a big part in the success of the brand. Mixing traditional German strengths such as reliability and high standards of engineering with Spanish flair resulted in a car that was certainly more visually appealing that its Polo sibling and arguably a little more fun to drive.

Since the current generation Ibiza was introduced in 2008 it has already received a major facelift, but this latest set of changes is more about taking advantage of the latest developments within the VW Group. Chief amongst them is a new range of petrol engines, most notably three-cylinder units that will feature across the Seat range and beyond. All Ibizas now use electric power steering too, helping to improve efficiency.

Inside the Ibiza gets a revised dashboard with a new touchscreen system, with a variety of features depending on the trim level. The Connect model in particular offers Apple Car Play or MirrorLink for Android phones, giving full connectivity and the operation of many apps directly from the touchscreen.

Our verdict on the Seat Ibiza Connect 1.2 TSI 90ps

The Ibiza has always been a strong contender in the supermini segment and while the latest round of changes is far from radical it has enhanced its appeal still further. The upgraded technology is welcome and would please those trading down from a smaller car, while the new engine range is impressive. The ride quality is a fraction better too although the electric steering gives up some feel as a consequence but this is a well-built and capable supermini that would make a sensible purchase.

The Ibiza in virtually all configurations should be an impressively cheap car to run. The purchase price is competitive, fuel consumption is excellent whether petrol or diesel powered and insurance costs will be low too.

It may be a small car but the Ibiza offers at the very least what should be expected from a supermini. In the front it is the large glazed area that helps the feeling of spaciousness, with good head and legroom for the class. In the rear it is a little more cramped, although average sized adults can comfortably fit two across the back. The boot is also sensible shaped and easy to use, while there are useful storage areas in the cabin too.

The layout in the Ibiza has been improved and inspired by the classy cabin found in the bigger Leon, and the improved clarity and quality are welcome. The biggest change is the adoption of a touchscreen system, and its proximity sensor system works well and responds accurately to inputs. The MirrorLink and CarPlay systems work very well too, making the most of the touchscreen's clarity.

Engine refinement plays a big part in the Ibiza's comfort levels, with motorway cruising causing little in the way of intrusion into the cabin. Even when extended the petrol power units fail to cause a fuss. The ride quality has also been improved over the outgoing car, with better bump absorption answering a criticism of the outgoing car.

All Ibiza models come with remote central locking and an engine immobiliser, with deadlocks and an alarm system on all bar the entry-level S model. With the adoption of a modern touchscreen there's virtually no incentive for a thief to break in and attempt to steal the audio system, while a sturdy parcel shelf keeps the contents of the boot hidden.

Even the most humble Ibiza is fitted with ESP, six airbags, tyre pressure monitoring and Seat's braking mitigation system, while further up the range features such as hill hold are also standard. The Ibiza has also has performed well in independent crash testing.

The Ibiza's refreshed engine range is deeply impressive, with the new 1.0-litre turbocharged units proving to be both frugal and flexible. Even so, the older 1.2 TSI unit remains a sound choice too. Blessed with a free-revving nature it performs much as a larger capacity naturally-aspirated engine would, and makes the Ibiza more than capable of high-speed motorway work. The revised suspension also plays its part, smoothing out more surface bumps but without causing excess body roll. The only downside is the steering which can feel over-light at times.

Smaller families could certainly use the Ibiza as a regular car, with boosters seats and older children fitting comfortably in the back. Full size child seats may leave little legroom however. The improved cabin materials should mean it is even better equipped to stand up the rigours of small children, and the boot is sufficiently big to carry a large pushchair.

The Ibiza is an ideal first car, particularly in relatively inexpensive petrol guise. Not only will it be cheap to run it is also undemanding to drive, looks smart and feels robust, and is also available with infotainment and safety tech likely to suit younger drivers.

It might not offer the highest levels of quality offered by the Volkswagen Polo, but the Ibiza is reassuring solid throughout. Inside the materials are improved in some areas over the outgoing car, and most of the surfaces occupants will come into contact with feel of good quality. The Ibiza also enjoys a strong image, building on its attractive exterior and the youth appeal of the brand. That said its good value also makes it attractive to older buyers.

Five door models are best suited to buyers wanting to use the back seats, and so equipped the Ibiza is straightforward to get into. Although a relatively small car the seats are at a sensible height and the roof line is relatively high making it easy to climb aboard. The same goes for the rear, with the doors opening to leave a good aperture. The boot is accessed easily through a large hatch, but the smart 'S' badge that doubles as the handle may prove awkward for those with long finger nails.

All Ibizas benefit from the upgraded infotainment system, which at the very least offers a touchscreen with USB input and MP3 playback. The more sophisticated system including Apple Car Play works very well, and gives the Ibiza the functionality of a bigger car. The sound quality is impressive too, particularly with the inexpensive speaker upgrade option.

Being a car designed to have youth appeal the Ibiza, like most of its supermini rivals, suits brighter shades although when matched to a good size of alloy wheel can wear more sober metallics too. In particular the colour pack option allows the buyer to have colour-coding inside and outside the car in contrast to the main paint finish, which is an usual option and likely to prove popular.

Happily the Ibiza retains its compact dimensions making for a car that is easy to slot into small spaces. Although the rear view is a fraction more limited than some rivals the power steering is super-light at low speeds and makes it a cinch to parallel park. Parking sensors are standard on Vista models and above while a reversing camera is also available.

Vauxhall Corsa Latest model vastly improved, cutesy looks may not appeal to all