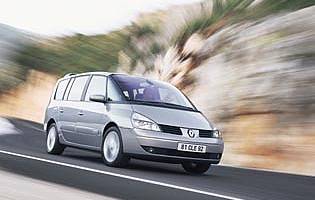 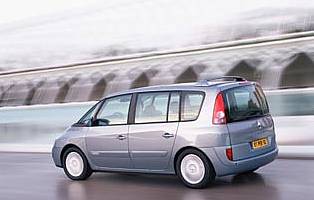 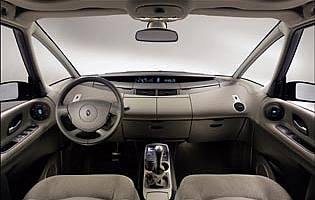 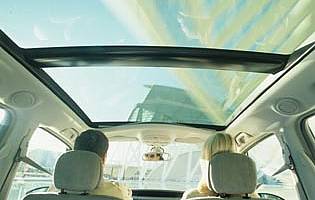 One of France's most famous exports, the Renault Espace, appears to be maturing with all the distinction and taste of a Bordeaux Claret. The avant-garde revolution that took place at Renault a few years back has benefited the Espace no end, with its stylish appearance and classy lines.

Although most of them do it all of the time, it isn't often that a manufacturer can legitimately lay claim to having created an entirely new market segment. However, when Renault whipped the dustsheet off the Espace Mk I that's exactly what the French firm had done.

The rakish-looking MPV must have caused a real stir when it made its debut in 1984, introducing people for the first time to the possibility of a non-commercial seven-seater. Today, there are many vehicles on the market that ape the Espace's original idea, but is the French offering still the MPV master?

Current evolution Espaces are light years ahead of their forebears in terms of style and sophistication. 'Bus-like' and 'utilitarian' are now inappropriate adjectives where it is concerned. The designers have tried to make Renault's seven-seater as attractive as possible.

Given that it will be used predominantly by families with children, it is fitting that the Renault is particularly well equipped with safety kit, too. Five crash test stars and a bunch of airbags will be a big draw for anyone with precious bundles to transport.

Our verdict on the Renault Grand Espace 3.0 dCi Initiale

The original and still the best - Renault's Grand Espace is the ultimate in people carrying. It looks good, drives well and is more practical than a Swiss army knife.

With the base model Espace starting at around the GBP20,000 mark, buying into this piece of automotive history doesn't come cheap. In fact, a 2.7-litre Porsche Boxster costs less than the top of the range 3.0-litre dCi Grand Espace (but you do get five additional seats). Fuel economy, unsurprisingly for a car weighing nearly 2,000kg, isn't spectacular, so budget-minded buyers would be best to go for one of the marginally more economical diesel units. Insurance groupings for the larger-engined Grand Espace models are high, which in turn will force up the price of premiums. Depreciation should be slow however, benefiting owners when it comes to resale.

Non-commercial vehicles don't come much more spacious or practical than the Espace. Seven adults will fit comfortably albeit without a great deal of room for their luggage. Fold down a couple of the seats and you are presented with a cavernous luggage cavity into which you can load suitcases and the like. The almost ridiculous amount of cabin stowage means that there is plenty of space in which to put your loose change and sweetie wrappers.

Some people find a digital speedometer terribly d'riguer. Conversely, others view them as kitsch: it all comes down to personal preference. All other controls in the Espace's cabin are very chic and ultra cool (the LCD air conditioning displays scattered all over the place, for example). The way the steering wheel appears to simply hover around the dashboard and the large soft gear knob add to this sense of style.

Improved levels of wind and road noise deadening coupled with a specially designed exhaust system help to keep aural cabin intrusions to a minimum. Plenty of head, leg and elbowroom also add a little extra comfort to the Espace experience.

Buyers can expect to find Renault's Anti-Intrusion Device (RAID) and engine immobiliser as standard, with the alarm system remaining on the options list. Joy riders aren't likely to take a shine to the big French bus, but professional car thief's stealing to order just might so ticking the alarm box might prove to be a wise move.

EURO NCAP doesn't give out five stars for nothing and a cursory glance at the Espace's safety equipment list shows why the MPV scored so well. ABS, EBD, dual front/side/head airbags, seat belt reminder, ESP, three-point seatbelts all round, ISOFIX anchors and traction control all come as standard. Renault's flagship model also features one of the toughest body structures on the market.

The Espace project, which started all the way back in 1984, was borne out of the need for space and seats rather than speed or performance. The larger engined models aren't exactly slow (the 3.5-litre V6 manages the sprint to 60mph in 8.1 seconds), but they do tend to wallow a bit around the bends and catch crosswinds like an airfield windsock. Handling has improved immeasurably over the course of the last twenty years, but by the nature of its design the Espace is never going to rival a high performance estate.

The Espace's raison d'etre. Some critics chirp on about there not being much luggage space when all seven seats are in use, but this is to miss the point: the Renault is a car that comfortably seats seven people. Many vehicles lay claim to having a similar capacity, yet more often that not seven means five adults and two children. Another reason to forgive the Espace is the fact that every spare inch of plastic has been gouged out to create numerous useful and conveniently located cubbyholes.

The Renault Espace is about as far down a teenager's wish list of first cars as it is possible to be. This is no criticism of the car itself, just that it is too big, expensive and costly to insure for the average seventeen year old. They may instead like to take a closer look at the Espace's similarly stylish baby brother, the Megane hatchback.

Renault doesn't have the best reputation for reliability when it comes to its products. Tales of dodgy electrics still haunt the French firm. However, things do seem to be getting better with the latest generation. Image is less of a problem, what with the funky styling and sophisticated lines of many of the manufacturer's products. The Espace and Vel Satis, for example, look far classier than any of their main rivals.

Wider door apertures and a greater distance between the second row of seats and doorframe all make for easy and graceful access to the Espace's interior. Older and less limber passengers may still struggle to get into the two rearmost seats, though. Capacious front passenger footwells afford occupants copious amounts of legroom and simple access.

Anyone stumping up nearly GBP20,000 for a base model Authentique Espace will rightly feel a little aggrieved at the absence of a CD player. All other models gain a six-disc changer and a couple of extra speakers.

Standard 'Ceylan' or 'Sam' interior fabric looks nice and hardwearing. Alcantara and leather options appear further up the range. The plastics used on the dashboard look nice and are in no way budget. Metallic paint is an option on all models and the nice shiny bits of chrome trim are only available on top spec Initale models. Non-metallic colours include Navy Blue and Glacier White. However, for the more traditional bizarrely named hues one has to look at the special-effect colour choices. Amande Green, Angora Beige, Orage Blue and Nacre Black are among the most pleasant.

Disappointingly, base Authentique models fail to benefit from parking sensors as standard. In a car of this size it really isn't asking too much to have these handy aids across the range. Large glass panels and an elevated driving position make life a little easier, however, all but the most confident of drivers will need to take a little extra care when manoeuvring an Espace. You can quickly find yourself running out of room in multi-storeys in something this big.

A space saver spare wheel is fitted as standard.