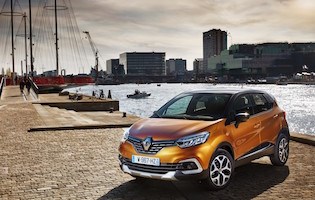 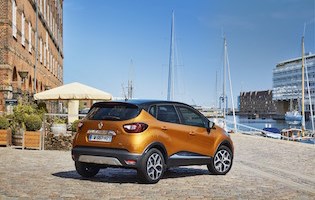 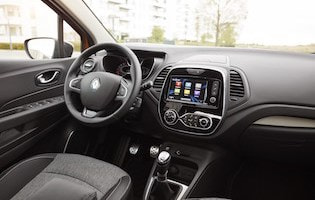 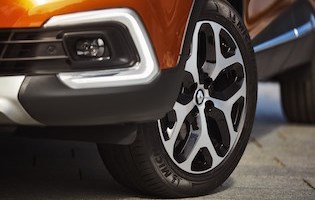 The Renault Captur was Europe's best-selling crossover in 2016, and it's because of this success that the French manufacturer is so keen to keep it in the public eye. How has it done this? By updating its looks. Because of this, you'll now find redesigned skid plates at the front of the Captur, as well a variety of new wheel designs to choose from. Mechanically it remains unchanged, with no new engines added to the line-up.

The new Captur is just as quirky-looking as the previous-generation car, but has been brought into 2017 with LED lights at the front and rear as well as a host of new colour options. The original Captur's colour-contrast roof remains, giving it a distinctive look when out on the road. These changes bring it closer into line with the appearance of the current Kadjar, as well as the soon-to-be-released Koleos.

Inside the changes are equally as gentle. A fixed-glass sunroof is now available on cars in Dynamique S trim levels and above, while soft-touch fabrics have been used more widely than in the previous car. Top-spec cars also benefit from a leather-trimmed steering wheel, too. The changes make the cabin feel more upmarket than before, but it hardly pushes the envelope when compared to the original Captur.

Four engines are available with the Captur, including a 120bhp 1.2-litre petrol and a 1.5-litre diesel. It's likely that the highest-powered diesel – producing 110bhp – will be the most popular in the UK as it provides the best economy as well as better performance. The handling has been made relatively light, making it easy to drive around town – which is where the Captur is designed to be driven.

The car's infotainment system is easy enough to operate, but lacks the precision found with competitor units. The satellite navigation in our test car frequently got confused, which isn't ideal in busy city traffic. That said, the optional Bose stereo fitted to our car was impressive, producing a clear sound at almost any volume – which will no doubt appeal to music lovers.

Our verdict on the Renault Captur Dynamique S Nav 110

This is by no means an all-new car. A series of subtle revisions to both the interior and exterior of the Renault Captur have brought it up to date for 2017, and given potential buyers a more compelling reason to pick the compact crossover. However, some interior plastics remain low-quality and, though updated, it may still be too similar to the previous generation car for some people.

With a range of efficient engines to choose from, the Captur really won't cost the earth to run. It'll also be relatively cheap to insure and tax, making it ideal for those families looking to reduce their monthly running costs. Pricings for the Captur are competitive too, making it a relatively low-cost purchase

The Captur's 377 litres of available boot space is pretty on-par for this segment, while its square size makes it ideal for larger items such as suitcases. The lip is relatively high, however, which could make loading heavier items a little tricky. You can fold the rear seats flat to extend the boot space, which adds a greater level of flexibility to the Captur. Inside the cabin, there are plenty of large cubbies and door bins, ideal for making sure the interior stays clutter-free.

All of the Captur's controls are well weighted, but lack the quality feel that you find with some rivals in this segment. That said, they all work well and make changing things such as the heating and ventilation easy. As mentioned, the main infotainment screen works well enough but simply lacks the sharp picture or simple operating system that you'd expect – and this makes it more of a hassle to use than in other cars.

The Captur's comfort levels are helped no end by the car's decent ride, as it irons out bumps in the road without translating any of these surface irregularities into the cabin. The seats are also very well padded, which means that longer journeys shouldn't feel like too much of a chore. There's a small amount of wind and road noise when travelling at speed, but around town the Captur feels as comfortable as you'd like it to be – without forsaking handling too much.

The Captur comes with the standard range of security systems including remote central locking, immobiliser and an interior motion sensor. Despite its funky styling, it shouldn't draw too much attention to itself, which shouldn't mean that parking it on the street at night will cause you too many problems.

This latest Captur hasn't been crash tested, but given that the changes to it are only cosmetic rather than mechanical, it'll be largely the same as the previous car. That Captur achieved five stars in the Euro NCAP crash tests, scoring 88 per cent for adult occupant safety, 79 per cent for child occupant safety and 61 per cent for pedestrian protection. It's worth remembering that these tests were conducted in 2013, which means that the Captur may not be as safe as more current cars.

Though designed to appeal to the ‘lifestyle' driver, crossovers more than often fail to deliver the same driving experience that you'd find in a lower, more convetional hatchback. However, the Captur returns a surprisingly involving drive, with an impressive lack of body roll. The 1.2-litre petrol engine fitted to our test car had enough grunt for city driving, though began to run out of puff out on the motorway. It's something worth remembering if you're planning on taking your Captur on longer, more motorway-heavy journeys.

With plenty of interior space and a good amount of luggage room, the Captur is a pretty ideal family car. The cabin also has plenty of storage, which should be enough to swallow up all of the clutter that families tend to generate. The robust plastics also feel hard-wearing enough to deal with the kind of abuse that young children can give a car, too.

With a range of small capacity but efficient engines, the Captur could be a good choice for those setting out on the road for the first time. The high seating position should also work to instill confidence in those who have just passed their tests, too. However, crossovers are angled more towards families which means that, although relatively well suited to the younger drivers, the Captur may lack the street cred that younger drivers could be looking for.

The previous-generation Captur had all of the robust quality that you'd want in a small family crossover. Though its plastics were hard, it had a decent amount of solidity to it. The new car is much the same, though its image has been improved through the use of more premium materials on the dashboard and switchgear. Some plastics lower down the cabin remain relatively flimsy, however, and it's these that are likely to take the most beating from the car's occupants.

With wide opening doors that aren't too heavy, the Captur isn't too tricky to get in and out of. This is carried over to the boot, too, which isn't weighty enough to cause anyone much trouble in its operation. The seat squabs are relatively flat and unbolstered, which makes sliding into the rear of the cabin simple – and the same can be said of the front seats. The slightly raised ride height may make it slightly more difficult to enter the cabin for some, but in truth it's unlikely to bother the vast majority of users.

As mentioned, our test car came with the optional Bose sound system that provided excellent clarity at all volume levels. At £19,095, our car also featured a multifunction steering wheel that provided easy control of the stereo volume, as well as the radio station channel. The main system works just fine – and it's relatively easy to pair your phone via Bluetooth as well – but it simply lacks the sharpness and ease of use that you'd expect to find with a car in this segment.

As with the previous-generation Captur, there's plenty of customisation available. As previously mentioned, the contrast colour roof is still an option, allowing customers to tailor the Captur's looks directly to their tastes. Inside, there's a range of upholstery options to choose from, as well as different interior finishers. The Captur certainly looks better in brighter shades; dark or plain colours have a tendency to wash it out and make it appear older than it actually is.

Thanks to its relatively compact size, parking the Captur really shouldn't cause too many people any trouble. Yes, it is somewhat higher than a conventional car in this class, but this only adds to its good visibility levels, while large wing mirrors give an excellent view of the area behind you. Most cars get parking sensors too, adding to its parking practicality, while light steering ensures any manouveur is undertaken with minimal fuss.