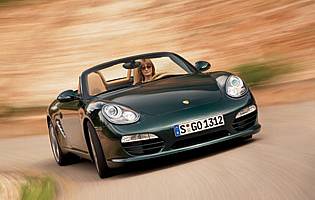 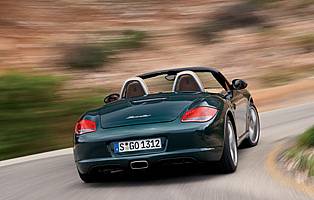 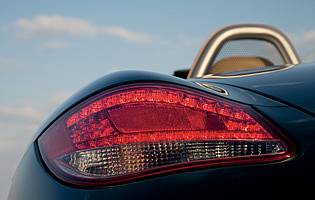 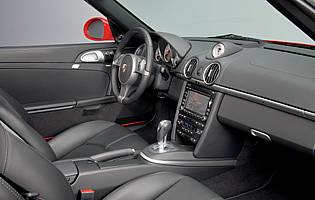 Having established itself as a worthy member of the Porsche model line-up the Boxster goes from strength to strength with the latest raft of changes. Exterior, interior and drive-train tweaks mean it's faster and more agile than ever before, but also benefits from better fuel consumption and refinement.

The Boxster faced a mixed reception when first introduced; as often happens when Porsche introduces a new base model it gets accused of diluting the brand. However, with much admired performance no-one can accuse the Boxster of offering a diluted driving experience. Its rear drive, mid-engined layout means it possesses the characteristic balance that Porsche models have become famous for, while the powerful flat-six engines help weight distribution, are extremely smooth and offer a distinctive bark at high rpm.

Both of the power plants have been revised for 2009 with the Boxster unit increasing from 2.7-litres to 2.9-litres and 255bhp and the Boxster S unit retaining its 3.4-litre capacity but increasing in output to 310bhp. The new engines are lighter and simpler in design although both remain flat-six in configuration, while the larger unit in the Boxster S employs direct fuel injection for the first time. The result is decreased emissions and increased fuel economy: the Boxster S using the PDK transmission can achieve more that 30mpg, an improvement of 16 per cent over the old Tiptronic S system.

The PDK box is useful for more than just improved fuel consumption, however. The Boxster range benefits from the addition of the twin clutch technology following its debut on the 911 range, replacing the previous Tiptronic S automated manual system. Sharper changes and a greater degree of flexibility means the Boxster can be a relaxed, fully automatic boulevard cruiser one moment and offer a razor-sharp racing experience the next.

Elsewhere, revisions are less obvious. The exterior design has been subtly revised with new wings at the front and changes to the headlamp assembly, with relocated indicators and fashionable LED daytime driving lights. At the rear, LEDs are employed again to offer a more striking design, while the exhausts are centralised and new wheel designs are employed.

Our verdict on the Porsche Boxster S PDK

The exterior changes to the Porsche Boxster are subtle but effective, making just enough of a difference to keep the model fresh. More obvious are the power-train enhancements and the trickle down of the PDK system is a real bonus for drivers as it is superior to the previous Tiptronic system. It's a shame the paddle operation spoils the recipe, but even that can't detract from the Boxster S all round package.

The Boxster S is requires a considerable investment in basic form with costs rising once options are added. Even so, the models have traditionally boasted excellent residual values so a sensibly specced car should see sensible returns. The handling of the model would be considered by some to be worth the money alone although, for the more casual driver, the decreased fuel consumption will be more of a benefit. Servicing and parts will not be cheap, however reliability should be strong.

Expensive and with insurance premium baiting performance, the Porsche Boxster S would be a poor choice for the young driver. It will also be to powerful for the majority of novice drivers.

The Boxster's ultra-firm chassis affords its own level of safety and special attention has been paid to protecting occupants when the roof is down with a strong safety cell and a body that diverts energy around it. Rollover bars are also present as are head, thorax and frontal airbags. The PCM stability control system is a potential lifesaver too, able to assist in braking and in countering oversteer very effectively.

For a two seater sports car the interior feels spacious. Despite its wrap-around design there's plenty of room in which to get comfortable. Door bins and glovebox are modest, but, with luggage space front and rear, the Boxster can accept a surprising number of bags and cases.

The Boxster S is requires a considerable investment in basic form with costs rising once options are added. Even so, the models have traditionally boasted excellent residual values so a sensibly specced car should see sensible returns. The handling of the model would be considered by some to be worth the money alone although, for the more casual driver, the decreased fuel consumption will be more of a benefit. Servicing and parts will not be cheap, however reliability should be strong.

The Boxster is a car that always attracts attention - most of it is positive but you've got to be prepared for the inevitable negative attention from vindictive individuals and the criminal fraternity. Thankfully Porsche has covered the usual bases with the likes of an immobiliser and remote central locking. The weakest part of the car is its roof, which is why the optional hardtop will no doubt appeal to some people.

There's a surprising amount of refinement to be found inside the Boxster S despite the canvas roof and wind and road noise are well suppressed. Even with the roof down there's minimal buffeting. The ride is on the firm side, but that's the nature of the beast. It does a good job of eliminating the bumps regardless. With the engine located immediately behind you there's more noise than in some rivals, but the flat-six hum is very pleasant and the majority of the noise is exhaust related. New seats offer a greater level of comfort with advanced ventilation that blows air through the seat cover, and the driving position can be readily adjusted. All of the mod-cons you might expect are present.

Chief gripe with the PDK gearbox-sporting Boxster S is the wheel mount paddle shift system that is far from user friendly. The position of the buttons also makes it easy to catch them with the ball of your thumb by mistake when steering vigorously, which is a major nuisance. The rest of the controls feature better ergonomics, with weighty steering full of feedback and controls that fall easily to hand. The PCM system does a good of tidying up the centre console, although with additional equipment specified there's still a lot going on.

With the ability to take only one passenger, the Boxster is definitely not a family car. If you can afford it, the baby Porsche would make a great second car alongside the firm's family-orientated Cayenne. But on its own the Boxster is a firm no for family duties.

Porsche's image has traditionally been very strong and, although the Boxster got off to something of a troubles start, it has established itself as a worthy wearer of the Stuttgart badge with its strong performance credentials and Porsche-like driving experience. Its kerb appeal is somewhat hampered by a partly deserved reputation as a poser's car, but anyone who knows their cars will understand that the Boxster's on road performance negates those opinions. The quality is not in doubt, with robust standard of build and materials.

Driver and passenger sit low down in the Boxster S, worth bearing that in mind if you're not the most agile. Getting out of the low-slung position tends to be more of an issue than getting in. The car's doors are big, so making a dignified exit in a crowded car park is a challenge.

Standard kit is rather basic considering the Boxster S's price tag, with just a CD radio featuring a five-inch monochromatic display to show for your money. An additional investment will see an upgrade to the PCM system with touchscreen sat-nav and a 40GB hard disc. Mobile phone preparation and a high quality Bose sound system are also available along with iPod integration, TV tuner and voice control, but all will cost extra. Where present, the uprated systems are ergonomic and highly functional, adding to the premium feel.

Four new colours have been added to the Porsche Boxster range for 2009, giving customers even more ways to avoid the uninspired, if safe, silver that the majority of Boxsters appear to be specified in. The roof can also be specified in red for the first time. Inside the centre console now boasts a black finish while leather comes in a range of tans - making the Boxster even easier to personalise.