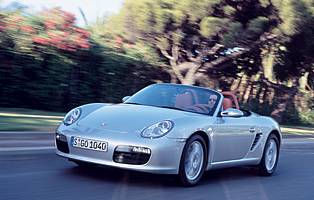 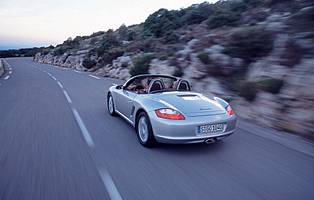 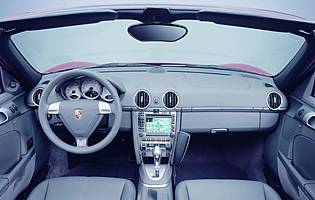 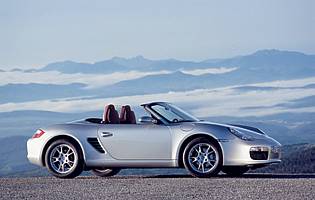 To the unfamiliar, Porsche's new-for-2004 Boxster might appear to be prime example of hype surpassing reality; after all, it looks no different from the original version, right? Wrong. In its pursuit of excellence, the German firm is famous for making incremental changes to its products and the Boxster is no different. Visually the changes are subtle and the mechanical revisions merely evolutionary, but the result is worthy of iconic status.

Porsche doesn't really do radical. Well, apart from the Cayenne it doesn't. For most of its existence the Germany company has fashioned, honed and gradually improved its core model, the 911. Adding the Boxster to its line-up opened up a whole new market for Porsche.

In the few years ï¿½ relatively speaking ï¿½ since the junior model's launch it has received praise and criticism in equal measure. Some people viewed the car as inferior to the 911, whilst others thought it a perfect way to enter Porsche ownership without breaking the bank.

There's no doubting that the car has proved popular, but there's always been a nagging doubt in some quarters that it was never distinctive enough. That's a charge you can no longer level at the car ï¿½ everything's been improved. But in typical Porsche fashion, you'd be hard pressed to notice the differences from afar.

The most obvious change is to the car's appearance. Granted it's hardly radical, but every one of the Boxster's panels is new and its nose has been styled to look less like the current 911 and more like Porsches of old. Aside from the new interior the invisible changes should generate the largest buzz. More powerful engines, revised suspension, improved handling and electronic aids have made this second generation Boxster even more of a complete package.

Our verdict on the Porsche Boxster 2.7

Porsche has done it again; not content with extending the life of its venerable 911 year on year, it's managed to squeeze even more performance out of its affordable baby model, the Boxster. The purists will be happy now that from the front it looks like a 'proper' Porsche, while everyone else will be able to enjoy the car's class-leading dynamics.

In isolation the Boxster is great value for money. Fast, prestigious, well built but not too big, it has all the right attributes. Once you take a look at the competition, though, the Boxster's asking price is a little high ï¿½ even in entry-level specification. All is not lost because the Porsche boasts some the best residuals around, making it a superb investment. This should at least offset the premium asking price, servicing costs and the need to feed the car super unleaded on an all to regular basis.

The Boxster's substantial front and rear overhangs are something of an optical illusion, as the car is not that big once you get up close to it. If the baby Porsche's modest dimensions are surprising, the firm's ability to squeeze not one but two meaningful boot spaces out of the car is impressive. Being mid-engined you get a deep space in the nose where the CD changer and jack also reside, while the space behind the engine is much shallower but still useable. Inside, there's a decent size glovebox and modest door bins. All in all it's easy to live with the car if you plan ahead.

Along with the engine, looks and handling improvements, the Boxster's cabin has undergone a few changes. Gone is the scattergun approach to ergonomics, replaced by a more coherent design based on the Cayenne. Prominent in this shift is a centre console that houses the sound system or the optional multimedia unit replete with sat-nav, stereo, phone and trip computer functions. Although comprehensive and useful, switching modes requires prodding one of a number of small buttons. In contrast, the car's main dials are beautifully designed and the roof requires only a quick pull on a catch and a short press of a button.

Once you've made the trip down into the Boxster's cabin you'll be rewarded with a fully adjustable driving position and seats that prove supportive over even the longest of journeys. With the engine located immediately behind you, noise levels cannot be ignored. That said, it's only upon start-up that it can be obtrusive if you want to make a quiet getaway. Otherwise, you'd be foolish to begrudge the engine's charismatic howl. Hood up the car is surprisingly refined, even at motorway speeds, while hood down wind buffeting is minimal.

The Boxster is a car that always attracts attention – most of it is positive but you've got to be prepared for the inevitable negative attention from vindictive individuals and the criminal fraternity. Thankfully Porsche has covered the usual bases with the likes of an immobiliser and remote central locking. The weakest part of the car is its roof, which is why the optional hardtop will no doubt appeal to some people.

Porsche proudly claims that the Boxster was the first drop-top to offer occupants side impact protection via head airbags located in the car's doors. It's a neat trick, and one that is in addition to the conventional twin front and side airbag set-up. The second generation revisions also include better rollover protection. On the active safety front you now get PSM (Porsche Stability Management) as standard, which is not just ABS and ESP but a complete package of electronic measures to help keep you out of trouble with the minimum of fuss.

The Boxster experience is an addictive one. That the car is easy to drive around town is a bonus because, frankly, you'll spend every moment thinking of an excuse to leave the urban grind behind. All the reports are true; the Boxster is a delight to drive, possesses one of the most communicative steering set-ups around, has plenty of grip but is willing to step out on command and has one of the finest engines to grace a sports car. There are more powerful motors, but Porsche's 2.7 six-cylinder unit is flexible, gutsy, always willing and tuneful. The improvements to the car's ride and handling have only further reinforced the car's iconic status. In-gear acceleration is rapid and corners are gobbled up with a terrier-like enthusiasm. The experience feels even more special with the roof down.

With the ability to take only one passenger, the Boxster is definitely not a family car. If you can afford it, the baby Porsche would make a great second car alongside the firm's family-orientated Cayenne. But on it's own the Boxster is a no-no for family duties.

Only the most confident ï¿½ or should that be foolish? ï¿½ novice drivers would consider the Boxster as their first car. Even if the price tag wasn't a problem the insurance undoubtedly would be. And that's without mentioning the car's potential to overtake everything on the road. It's fast, rear-wheel drive and super-responsive ï¿½ all the things you don't want in a first car.

By and large Porsche has never suffered from a poor image. There have been blips in its history, but nothing damaging. That changed with the arrival of the first Boxster, as it polarised the opinion of the purists ï¿½ some didn't view it as a 'proper' Porsche, and its styling didn't achieve universal acclaim. The second generation car rectifies many of these issues, although the decision to go with a Cayenne-style centre console has not been universally liked due to issues over the perceived poor quality of the materials used.

You sit low down in the Boxster, so it's worth bearing that in mind of you're not as flexible as you once were. The problem's not getting in but getting out, as you'll need to be careful if the roof is up. Also, the car's doors are big, making a dignified exit in a croweded car park a challenge. That aside, the boots ï¿½ fore and aft ï¿½ boast a convenient cabin remote release, and the hood is, of course, electric and can be raised or lowered at up to 31mph.

Standard fit is a radio and CD player combination. Although good in its own right, anyone seeking a better solution can opt for a CD changer, which is located in the car's front boot. Spend more money and the all-singing, all-dancing PCM (Porsche Communication Management) unit comprising stereo, sat-nav, trip computer and phone can be yours. Some of the buttons are a little fiddly, but the unit is surprisingly useful thanks in part to its easy to read colour screen.

Some things never change ï¿½ silver is still one of the best colours for Porsche's Boxster. Forget the bright hues such as yellow, because dark metallics add a distinguished layer to the car's already impressive kerb appeal. Inside there's a similarly restrained ambience. Dark plastics and either cloth or leather upholstery are the main ingredients, and the various combinations work well.

When sitting low down in a car such as the Boxster, it can be difficult to place it relative to its surroundings. This much is true of the Porsche until you are familiar with its extremities. However, once confident of where the nose and tail ends, parking is rarely a chore. The car's steering may not be supermini light but it requires little effort at low speed, and it's worth remembering that the issue of rear blind spots disappear ï¿½ literally ï¿½ when the roof goes down.

Tyre mouse and the associated equipment is all kept in a compartment in the car's front boot.

The Boxster range is split between the base 2.7-litre (240bhp) model and the more powerful 3.2-litre (276bhp) Boxster S. The former gets a five-speed manual gearbox, the latter a six-speed unit. An optional Tiptronic automatic transmission is available, plus the chance to fit the six-speed manual to the entry-level Boxster.

BMW Z4 Arresting looks and boasts plenty of power, but not the sharpest on the road

Mercedes-Benz SLK-Class Revitalised SLK is closest to Boxster but is no bargain, either