From the front, the 307 CC is rather stylish 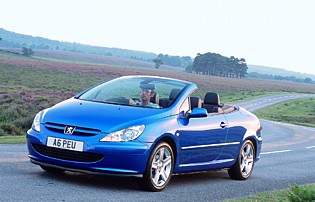 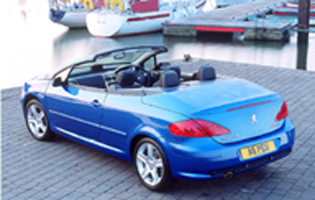 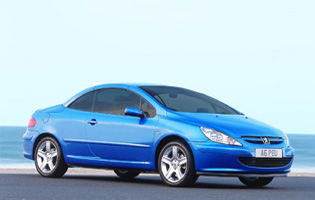 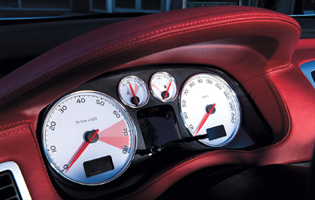 Having been the first manufacturer to make a folding tin top available to the masses with its 206 CC, Peugeot has repeated the trick with the larger 307 CC. While the erstwhile 307 may seem like an unlikely donor car for a stylish cabriolet with Grand Tourer pretensions, the result is surprisingly effective.

In recent years the cabriolet market has exploded as manufacturers have swiftly introduced what would once have been viewed as unlikely concept cars as full-scale production models. The introduction of practical folding hard tops rather than insecure and leak-prone soft tops represented a major step forward. Peugeot actually introduced its first folding hard top back in the 1930s but to all intents and purposes the 307 is the closest the company has come to perfecting the concept it was instrumental in developing.

CC stands for 'Coupe Cabriolet', indicating the car's attractively split personality. With the roof up the car may not exactly share the dramatic fluidity of coupes such as its 406-derived stablemate, but it performs essentially the same function and operates as a genuine 2+2 vehicle.

Press a button and 25 seconds later the car quite literally opens up to its full glory. Not since Boticelli's Birth of Venus has the removal of a hard carapace been so effective. The frumpy and lumpy 307 hatchback is somehow transformed into a Grand Tourer that evokes the spirit of the 1950s and 1960s while being packed full of modern technology.

The folding roof mechanism is far more convincing than it was with the 206 CC and never seems to struggle despite the huge amount of weight the car gains as a result of its novel tin top. While the benefits of a folding hard top are obvious enough - weatherproofing and security - the downside of the additional weight the car must carry is slightly stodgy handling and sluggish acceleration, even in the more powerful six-speed 180bhp version. In fact, it does not feel appreciably quicker than the five-speed 138bhp model, which could well be the better bet.

Destined to engage in a perpetual battle with the Renault Megane CC and later additions to the folding hard top marketplace, the Peugeot 307 CC still has plenty to recommend it. Unexpectedly, it looks better and drives better than the Renault, even if it fails to match it for specification and lacks the option of a diesel engine.

Compare running costs to the 307 hatchback and you'll be disappointed but compare them to most other four-seater cabriolets and you'll be pleasantly surprised. Considering the uncompromising nature of the CC concept, you're getting a pretty good deal and because of the strength of the roof, the 307 CC is viewed by insurers as a coupe rather than a cabriolet, which means significant savings on your premium. Fuel costs are reasonable, but sadly there is no diesel option, which is where the Renault Megane CC will likely steal some customers away.

Perhaps the greatest surprise is the amazingly capacious boot, which should cause the 307 CCs rivals to hang their heads in shame. The size is reduced with the roof down, but is still more than respectable and adds hugely to the car's everyday practicality.

Compared to the dull dashboard of the 307 hatchback, the driver interface of the CC is a masterpiece. Undoubtedly, this is one of the best Peugeot interfaces of recent years with beautiful and easy to read white dials, moody backlighting and a sporty feel. Switchgear is of a high quality with a clever choice of complimentary plastics. Some of the radio and sat nav buttons are too small and rather too close together, but the general impression is positive and wouldn't shame many a classy cabriolet.

Supportive sports-style seats are a big improvement on the 307 hatchback and the steering wheel affords a good level of adjustment. The seats even adjust for height, which is something missing in many cabrios and coupes, so even short drivers will have no problem getting comfortable. Very tall drivers may experience some problems with the line of the windscreen, but it is far less problematic than the 206 CC. Considering the car's compact dimensions, the rear seats are surprisingly spacious. Realistically though, only one back seat passenger can be carried in comfort. With the top down and the windows still in place, there is little wind buffeting, even without the optional deflector screen.

The solid roof gives the 307 CC an immediate advantage over most of its rivals and means that owners needn't feel apprehensive leaving the car parked on the street. Peugeot includes plenty of other safety features as standard, too, including a Thatcham category 1 ultrasonic alarm and a delayed automatic locking function which reduces the likelihood of the car being left unintentionally unlocked.

In the event of a rollover, the rear bulkhead contains telescopic rollover bars with electronic sensors, along with reinforcement bars in the windscreen pillars. Front occupants get front and head/chest airbags (to compensate for the obvious impossibility of side curtain airbags), and overall rigidity of the car's structure is good thanks to a series of strengthening measures. The presence of ESP with anti-skid function, ABS and yaw control helps to avoid an airbag deployment in the first place.

Don't let the looks fool you - this is no keen driver's car. Steering is pretty crisp and braking is creditable, but there's no one element of the car's performance that really makes a driver's eyes widen. Even so, it's fun to drive a CC with the top down in sunny weather, and when it rains you can just pretend you're in a slightly odd-looking coupe or saloon. The car's extra weight seems largely responsible for the lack of performance profile. Peugeot is keen to point out how rigid the car is, but it still feels less than rock-solid around corners, raising some questions about long-term wear and tear. A benefit of the weight is that the car never feels less than firmly planted on the road, making it ideal for anyone put off by twitchy cabriolets and coupes.

The small rear seats may be kiddie-sized, but they are not suitable for carrying wee ones on a regular basis. The 307 CC could find its family role as a car for mum or dad to use for business during the week and as a family picnic hamper for summer weekends, but only if the household owns a more practical vehicle as well. It does have one family-friendly quality though - kids just love watching the roof folding and unfolding like some sci-fi robot.

High prices are unlikely to make the 307 CC a viable option for any but the wealthiest new drivers, and it's likely to be a long time before many turn up on used forecourts, by which time we will know if the roof folding mechanism is as enduring as it seems. Insurance costs are reasonable given the car's specification, but still not as attractive as the hatchback.

Bearing in mind that the CC is based on the less than dashing 307 hatchback, Peugeot has done a remarkable job in creating a vehicle with a fair amount of style and dash. The interior in particular is a pleasant surprise with some excellent design work paying large dividends. It certainly feels classier than its Renault Megane CC rival on the inside. Peugeot cabriolets are generally well regarded and hold their value far better than the rest of the marque's cars - check out the 306 Cabriolet if you need proof. The Peugeot badge may not match Audi or BMW for prestige, but the folding roof is every bit as good as any Mercedes equivalent you care to mention.

Its hatchback origins count in the 307 CC's favour by providing an accessible overall configuration, but the modifications made to the hatchback body all create accessibility problems. The heavy doors help with structural rigidity but require a strong arm and special care must be taken if you are parked on any sort of gradient. Similarly, the boot has a tendency not to close properly unless given a forceful shove. One particularly clever touch is the manual boot release mechanism. Pressing the centre of the '0' on the 307 tailgate badge does the job and keeps the rear profile uncluttered. It can also be operated from the key fob.

Despite its funky graphics and hi-resolution screen, Peugeot's satellite navigation system is a disappointment. The system seems to be constantly thinking about its next move, so that the cabin is filled with the sound of discs spinning and reaction times are slow. Sound quality from the stereo is good but the dash-mounted CD multichanger takes an age to spit out CDs. Switches and dials are nicely fitted, but the interface system behind them is unintuitive and ultimately annoying.

Unusually for a cabriolet of this size, darker hues seem to suit the 307 CC's lines. Lighter colours lose the definition of the striking LED rear light clusters and tend to dilute the impact of the boldly coloured interior. If your budget can stretch to a full interior option, it is well worth it. The stitching and attention to detail is beautiful, while the full leather wraparound of the instrument binnacle wouldn't look out of place on a Daimler costing five times as much.

Rearward visibility can be a problem owing to the unusual configuration of the car's rear section (the rearmost point is some way behind the back of the cabin) and the fairly thick rear pillars. The addition of parking sensors solves the problem completely - Peugeot's sensors seem particularly accurate and well calibrated. The 307 CC has a modest 'footprint' so squeezing into parking bays is rarely a problem, but it is quite wide in proportion to its length and the heavy doors may cause one or two problems.

In all cases, the alloy wheels of the 307 CC are equipped as standard with anti-theft bolts. Protected in the boot, the spare wheel is steel for vehicles fitted with 16-inch wheels and aluminium if the 17-inch wheel is fitted as standard or as an option.

Two variants featuring a 2.0-litre petrol engine rated at either 138bhp or 180bhp (the same engine found in the 206 GTI 180). The more powerful version comes with a six-speed manual gearbox as opposed to the five-speed gearbox in the entry-level version, which also has the option of a five-speed Tiptronic automatic.

Audi A4 Cabriolet a class up and with far more clout