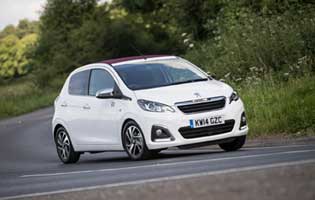 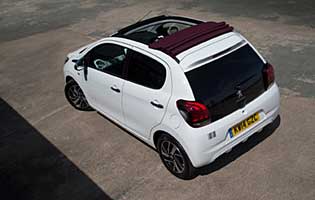 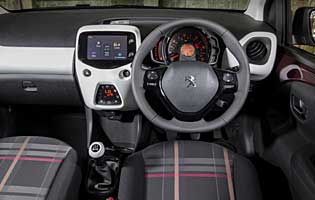 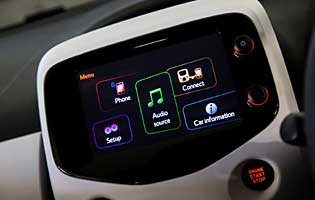 There are few small car experts better at the game than Peugeot, and its latest offering is the 108. Replacing the 107 that came before it, the 108 is the smallest car in the range bar the pure electric Ion. As with the outgoing model it is a car designed and built in partnership with Citroen and Toyota.

To look at the 108 looks like an entirely new car; the sheet metal has been changed dramatically compared to the 107. It shares the latest Peugeot family grille and when fitted with alloy wheels on some of the higher-specification versions it appears much more grown up than before.

Although it looks substantially longer than before, the 108 rides on the same platform as the 107 and there's only an incremental increase in overall dimensions. Its competitors have evolved around it, with some now quite a bit bigger, but the 108's designers have kept faith with middle-ground position to make sure that the new model remained easy to park in the city.

Mechanically the 108 also sticks with the tried and tested recipe. The 1.0-litre three-cylinder engine previously found on the 107 remains unchanged but now there is the option of a bigger and more powerful 1.2-litre engine, giving a bit more performance outside of the city. A further boost is the fitment of stop/start which helps to cut emissions and fuel consumption.

The 108 comes in three or five door forms and the range of personalisation options has been expanded to include decal packages and dashboard trims, while some models are also available with a full length fabric sunroof. The infotainment system is brand-new too and uses phone syncing to provide a range of digital services.

There's no shortage of competition in the city car segment, not least its two siblings, but the Peugeot 108 acquits itself very well. It offers decent space for the exterior dimensions, copes well in the city as well as out of town and has enough character and visual appeal to be desirable in its own right.

The smaller and cheaper of the two engine options is the better choice, offering excellent potential efficiency and tax-friendly emissions. A small fuel tank means that a full fill won't cost the earth, but it should last a while. Modest overall running costs should prove attractive to all ages.

Up front the 108 has good space for passengers, with impressive head and legroom. In the back children will be happy but adults may find legroom and headroom in short supply. The boot is also a little on the small side, but is at least a good shape.

A simple and attractive display sits behind the steering wheel while the touchscreen and heater controls are also clear and easy to use. On the move the touchscreen can be a little harder to use as it is less responsive than some alternatives, but nonetheless it is a welcome addition to the car.

For a car this size the 108 is impressively comfortable. The seats offer respectable support, it does a decent job of trying to soak up road bumps and although the engine is a little on the noisy side the sound itself is not unpleasant.

An engine immobiliser is standard-fit on all trim grades, and remote central locking has now been made a standard feature across the range too. Deadlocks can then be activated with a second press of the 'lock' button on the key fob to prevent thieves opening the doors from the inside after smashing a window.

In 1.2-litre form the 108 has useful turn of speed, with the willing three-cylinder engine encouraging the driver to make the most of the performance. The gearbox is slick and the steering is accurate and a pleasure to use. One issue however is the clutch and engine response, which can make pulling away smoothly irritatingly difficult.

In three-door form the 108 is not an ideal family machine, as children will have to make their way through the front doors in order to access the rear seats. That said there's enough space for smaller children to be accommodated although bulky child seats will rob some of the precious room.

The 108 would make an ideal car for the first time driver, offering a relatively easy drive, low running costs and compact dimensions. It should prove cheap to insure too.

Buyers are looking for quality even on cars at this end of the spectrum and happily the 108 scores well. Both inside and out it feels sturdy and well-finished, and even the cheapest plastics in the cabin aren't objectionable. Peugeot has always had a strong image in the small car segment and the 108 is sufficiently recognisable that it will feed off this compared to rivals in the segment.

This three-door model is obviously less accessible than the five-door version but even so the large doors help, and the seats tilt and slide forward a good distance. Adults will need to duck and squeeze to climb into the rear, but the front presents no problems. Access to the boot is good too.

While the 108's audio system only has four speakers, the Mirrorlink system allows USB and Bluetooth inputs - and hands-free telephone calls. The media interface is displayed on a large colour touch-screen at the top of the centre console, which offers clear graphics but is not as responsive as some alternative systems.

Rather than the drab and plain interiors of older city cars the 108 has a much cheerier cabin, with patterned seats and coloured panels on the dashboard. With the option of exterior graphics too there's no excuse for having a 108 that's not to your taste.

For a car of this size it is surprising to find a reversing camera fitted but it appears on higher specification models. Even so the standard car offers great visibility and a tight turning circle, allowing it to squeeze into the smallest viable spaces.

Volkswagen Up! Classy option, most expensive with it but very accomplished

Fiat 500 Significantly down on luggage space but looks fantastic