Leaf is distinctive and unusual from the front 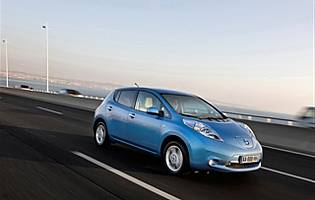 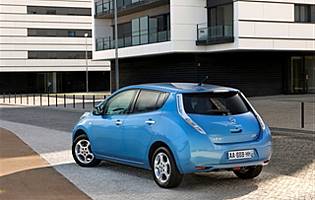 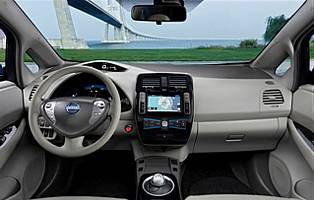 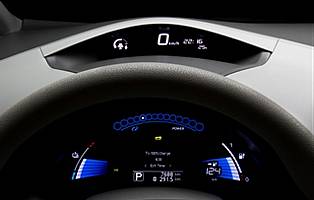 After decades of trials and small-scale production, the electric car has finally reached the reality of mass production with the introduction of the Nissan Leaf. The Japanese firm has committed vast fortunes in terms of design and production to make a viable alternative to the combustion engine.

The task of producing a fully electric car on a large scale is fraught with difficulties and challenges, so it is perhaps no surprise that the Leaf has been many years in gestation, much longer than a conventional car. However, a big part of the Leaf's design is that it is intended as an alternative to a conventional car, so ease of use is another key element of the overall design.

The car's exterior design is a mix of convention and necessity. The basic silhouette is relatively similar to that of a conventional hatchback in order to make it clear that this is its intended purpose. A more controversial design could have easily frightened buyers who already have to grapple with the new technology. There are also a number of sharp creases at various points along the body which are for aerodynamic purposes: because of the Leaf's largely silent powertrain, any wind noise is much more obvious so great efforts have been expended to avoid this.

Underneath the Leaf is a relatively conventional car bar the powertrain, although the chassis on which it is built is new and many of the components were designed specifically for this car. The powertrain itself is made up of a pair of electric motors driving the front wheels, components under the bonnet that manage the flow of power from the batteries to the motors and the batteries themselves, which are thin and therefore are laid along the floorpan for better weight distribution.

Inside the car is also largely conventional, although managing 'range anxiety' - the fear of being stranded with flat batteries - explains a lot of the features found on the inside. At the centre of it is a unique instrument display and a clever satellite navigation system, fitted as standard. The combination of these two elements gives the driver comprehensive information related to the health of the batteries and power consumption, but also how far the remaining charge will carry the car and also where the nearest recharging points are, crucial to a stress-free journey.

Our verdict on the Nissan Leaf Leaf

It is difficult to compare the Leaf to a conventional car as it is so fundamentally different, but what is clear after driving it is that the technology works and the advantages are clear to see. The high initial purchase price will be too much for some, though the vastly reduced running costs do go a long way to offsetting this. As a car in its own right the Leaf is a success, but sales success is another measure, but it deserves to succeed.

How the Leaf performs in this respect remains to be seen, but the high purchase price - much higher than a conventionally-powered rival - is offset by vastly lower running costs, with the expected price of an overnight charge to be in the region of GBP2.

The Leaf offers class-competitive space for passengers and luggage, and so is perfectly acceptable rather than exceptional. Practicality in terms of space is also on a par with its rivals, but the Leaf is less practical than a conventional car in terms of its ability to cover distances. The Leaf's range is highly dependent on the manner of driving and the conditions, so a worse case scenario means the Leaf could need to be charged several times on a long journey.

The Leaf has a great deal of important information to give to the driver and the sensible and intelligent use of the instrument panel and sat-nav system does an excellent job of telling the driver everything they need to know. Of particular importance is the energy regeneration display, and the simple series of illuminated circles makes it easy to understand the current state of performance.

Ride comfort in the Leaf is good, and with the weight moved low down in the car the suspension can be relatively soft without impacting on bump absorption. Of greater impact to comfort though is the virtual absence of noise. Whilst stationary and at low speeds there is no noise at all, and even at higher speeds it is only the faint rush of wind that makes its presence felt. The single-gear transmission and light controls also help greatly in this respect.

As well as standard security features, it is highly likely that an average thief would probably struggle to get the Leaf going without some knowledge of its powertrain, making it an unlikely target.

Any new technology has to manage safety worries but as well as the usual suite of active and passive safety features, the Leaf's battery pack is essentially made up of 'dry' cells so there are no potential leaks, and being mounted safely in the floor of the car means there are no safety question marks.

On first acquaintance it is easy to be a little wary of how the Leaf will drive given its unusual power source, but it only takes a few miles to realise the advantages and make the most of them. Although not the best way to preserve the battery, the electric motors offer maximum torque from zero revs, so a well-pressed accelerator results in quite rapid acceleration. However of greater relevance is the near-silent operation, and the low centre of gravity, all of which combine to make the Leaf a very appealing car to drive.

As a family machine the Leaf offers a useful amount of space, but it is its zero emissions credentials and ease of use that would make it an ideal car for the school run and shopping trips.

The Leaf is a car for the environmentally aware and therefore may well show up on the radar of new drivers, but the high purchase price is likely to put it way out of reach for most.

Given its relatively high price the Leaf needs to feel worthy of the price tag and the quality of the car itself is close to doing so. Although it could not be described as luxurious, the good materials and appealing design give a feeling of quality. The Leaf's image is all down to its green credentials, and it is likely that the Leaf will be seen as having a very strong image as a result.

With a conventional cabin layout and a family hatch silhouette the Leaf presents no problems when climbing aboard. The same can be said for the boot, which has a low loading lip and a good-sized tailgate.

The standard sat-nav system includes a CD/tuner with Bluetooth and USB audio system which provides a high level of sound quality.

The Leaf's zero emissions tag and unusual shape lends itself to soft colours: the blue and white models featured in early production suit it well. The trim is also light in colour, perhaps not as good at hiding marks as darker colours but it is well suited to the car.

With a large glass area, good visibility and instant torque from the electric motors, parking the Leaf is very simple indeed. Standard parking sensors are included too.