The new generation face is present on the Sportback 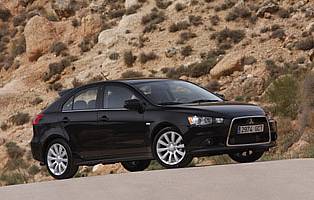 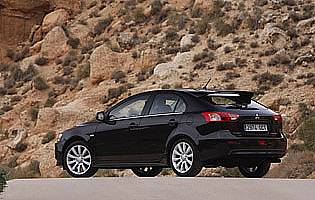 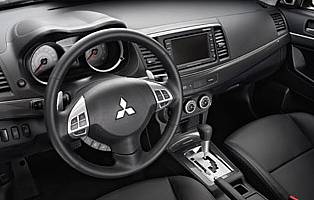 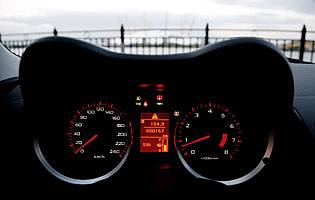 The family hatchback market is one of the largest in Europe and the UK, and the absence of a larger Mitsubishi hatchback model to fill the void has been glaringly obvious for some time. The Japanese manufacturer has finally opted to produce a model for the huge market, opting to modify its existing Lancer saloon to perform the task.

The huge gap in Mitsubishi's Lancer range is one that has hindered the manufacturer's growth in Europe in recent years. At the top of the pile is what is widely considered to be one of the most cost effective and enjoyable high performance cars that money can buy, the Mitsubishi Lancer Evo X. For buyers wanting a more sedate road car, the company was only able to offer the standard Lancer saloon, albeit with a decent range of engines.

That will all change as the Euro-friendly Lancer Sportback is made available. Designed specifically with hatchback loving markets like the UK in mind, the Sportback is intended to fill the gap between the two range extremes and Mitsubishi hopes it will significantly boost sales as a result. Sportier and more youth orientated than the saloon, it's available with a range of engines to suit most tastes.

Likely to cause the biggest stir, however, is the Ralliart version, featuring a 236bhp version of the two-litre turbocharged engine from the Evo models. For the UK market, the Ralliart is only be available in Sportback form so as not to be confused with the Evo X. Sharing an all-wheel drive transmission, dual clutch gearbox and body parts including the lightweight bonnet, the model is designed to rival performance variants of family hatchbacks, but is one of the few to offer turbocharging and four-wheel drive.

For family car drivers, the Sportback's range of 1.5-litre petrol, 1.8-litre petrol and 2.0-litre diesel engines offer more down to earth performance. The Sportback is well equipped in standard form and benefits from sporty bodywork additions such as the rear roof spoiler and jetfighter inspired grille. Families will doubtless also be impressed by the size of the Lancer Sportback; longer and taller than some D-segment saloons.

Our verdict on the Mitsubishi Lancer 1.8 GS4 Sportback

The Lancer comes to the family hatchback market late, but its combination of high equipment levels, practicality and sporty design should stand it in good stead. Inheriting an excellent chassis from its sister models makes it one of the most enjoyable family hatchbacks to drive and the addition of the Ralliart model means the Lancer finally feels like a complete range, giving it extra credibility.

Very competitively priced, the Lancer Sportback offers a good deal of value for anyone looking for better than average specification from their family hatchback. A high level of build quality should ensure reliability and minimal returns for repairs. Fuel economy is average and is not helped by the short gearing that leads to high revs on the motorway.

The Lancer Sportback interior is noticeably spacious in the front and rear, much more so than its C-segment rivals. The hatchback brings an additional degree of practicality and the rear seats spring into a flat position with a single pull of the boot mounted release levers. The boot itself has a floor that can be lowered to improve load space, but when kept in its higher position the boot is shallow and the subwoofer speaker and seat release mechanisms impinge on the width. Regardless, it's a big improvement over the saloon in terms of load carrying ability.

The Sportback's control layout is typically functional and all of the buttons and levers are positioned where UK drivers will expect to find them. The centre console of the higher specification models featuring the integrated sat-nav and audio system are neater than those without as a result of many of the buttons not being required. Heating and ventilation controls are in a classic three dial design and the dials are simple but effective with a small digital display in the binnacle to relay additional information.

Seats are plush and supportive, with excellent bolsters for the driver and front passenger. The 1.8-litre is quite a refined unit and is extremely quiet at tick over, although the short gears mean it does tend to buzz at higher speeds. Road and wind noise are minimal and the interior is well equipped with cupholders present in the front and rear and air conditioning.

An alarm and immobiliser makes the Lancer Sportback harder to steal, while a keyless ignition is also present on higher specification models. Unfortunately, the higher specification audio and sat-nav system does not feature a removal facia, but it is discreetly incorporated into the interior so should not be as obvious to thieves as an aftermarket unit.

Driver and front passenger are protected by dual stage airbags that not only detect whether the seat is occupied, but also match the inflation pressure to the severity of the impact. Side impact air bags are also included and curtain airbags protect front and rear passengers. There's also a driver's knee airbag to protect the lower limbs. Naturally, Mitsubishi has engineered the shell to absorb impacts and the rear seating has also been designed to minimise the chances of luggage in the boot causing injury.

The Lancer Sportback's handling is very impressive. It's extremely stable and keen to turn in with a smooth and consistent feel to the steering. The chassis is very tight, even capable of cocking a wheel when required. The 1.8-litre engine is smooth, but lacks low down power meaning gear changes are more frequently required. To counter this it seems Mitsubishi has adopted low gear ratios for the five-speed manual which do help acceleration, but make the car a little revvy at cruising speed.

Practical and roomy, the Lancer Sportback makes a sensible choice as a family car. It is, after all, pitched at the family hatchback market. The interior may not have the hard wearing qualities desirable for dealing with children but getting child seats in and out of the rear should be trouble free and there ought to be enough room to carry a fold down pram and groceries. Ride quality is good enough to allow children to sleep peacefully in the rear, too.

The Lancer Sportback seems well suited to the younger market, particularly with its reasonable pricing, impressive sound system and console plug-in ability in GS4 form. It's probably a slightly larger than usual choice for a first car, but it's easy to drive and handsome, plus the Evo link ought to give it credibility.

While the high powered lancer Evolution models have a fearsome reputation, the standard saloon road cars have never had the same appeal in the UK. The Sportback aims to change that by giving UK car buyers what they want; a practical family hatchback version. Sales will doubtless be buoyed by the reputation of the Evo and Ralliart models. Quality is very good, with few rattles from the interior or clunks from the chassis. Interior plastics are on the cheap side however, and may mark easily.

The Sportback's hatch makes access to the rear much improved over the saloon Lancers, while access to the interior is largely the same. The rear doors are awkwardly shaped but still offer easy entry while being able to open to a wider angle in tight spaces. Access to the front is good to.

Unlike the blank facia plates of Mitsubishis of old, the GS4 trim level benefits from a premium integrated sat-nav and sound system, featuring a flashy fold out mechanism. There's an auxiliary input and even a triple connection set up to allow games consoles or video to be played from external sources on the large colour screen. Sound quality is very good, aided by a large subwoofer speaker in the boot.

Some interesting colour choices are available for the Lancer Sportback, with a burnt orange being among the more eye-catching. The swathes of black plastic inside benefit from the carbon effect divide that runs across the dashboard. A leather steering wheel and gear knob are also welcome touches and the larger alloys help fill the arches of what's actually quite a large car.

The Sportback is deceptively long but, unlike the saloon, the car end roughly with the window. This makes judging the position of the rear easier, although visibility out of the back is not great. The turning circle is very tight and well positioned mirrors give a good view around the car.