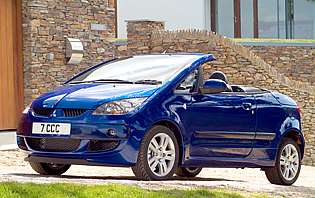 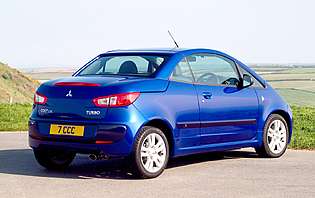 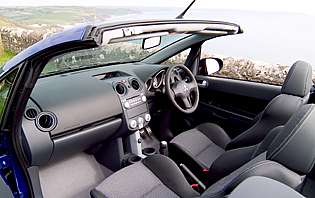 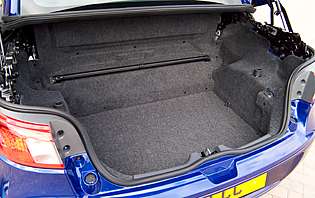 Adding desirability to the Colt range, Mitsubishi has introduced the CZC, a convertible version of the popular hatchback that uses a folding metal roof to convert from a coupe into a cabriolet. Available in two versions and with a strong standard specification, it has a lot to offer buyers in this competitive market segment.

With a turbocharged CZT version of the Mitsubishi Colt on sale, the convertible CZC model blends similar performance of the hot hatch with additional attraction of open air motoring. As with many modern convertibles, the CZC uses a folding metal roof instead of a fabric item, and all that is required is the release of two catches and a button press for the roof to be stowed in a brisk 22 seconds.

Turning the practical hatchback into a head-turning drop top has been achieved with ease, as the CZC retains its diminutive proportions. Chunky alloy wheels, standard on both models, are a welcome addition, as is discreet bodystyling, which gives it a dose of aggression. The CZC looks smart with the roof up too, avoiding an excessively stretched rear end to accommodate the roof.

Inside, much of the interior is carried over directly from the regular Colt model, which means a well designed and constructed cabin with an unusual feel. Although much of the interior is finished in a grey colour, flashes of silver, areas of leather trim and the use of smart translucent plastic give it a brighter feel without sacrificing anything to practicality. There are also plenty of useful storage areas throughout the cabin.

Mitsubishi has also made the decision to keep the rear seats in the CZC, something which some of its rivals have done while others have not. The boot space on offer is already generous, though the rear seats are best suited to small children and short journeys, or as extra storage space rather than has a genuine pair of seats.

Our verdict on the Mitsubishi Colt CZC Turbo

Running costs for the CZC Turbo should be very reasonable for a car in this class and with this performance. Fuel economy and insurance are reasonable, while the initial purchase price is good considering the standard specification.

The CZC loses remarkably little space given the addition of a folding roof. Front seat passengers are just as generously accommodated as in the hatchback, with a large amount of leg and headroom. Rear seat space is much more restricted, making the seats suitable only for small children. Boot space is excellent with the roof up, and although it is reduced with the roof down it remains a useful amount of luggage space.

The layout and controls in the CZC are excellent, with clear labelling and chunky buttons which are easy to use. Remote controls on the back of the steering wheel for the audio system are a useful touch, as is the subtle illumination of the dashboard at night.

Despite its sporty feel the CZC provides reasonably comfortable transport, with supportive seats and a decent driving position. As mentioned previously, wind noise does pick up a little at motorway speeds, but otherwise there is not much in the way of road or engine noise. The non-turbo version does without sports suspension however, which results in a more comfortable ride.

All CZC models come with remote central locking with deadlocks and an engine immobiliser, while the Turbo version also gets an alarm system as standard. Additionally, the folding metal roof provides increased security over a conventional fabric roof convertible.

Substantial body stiffening has been added to the CZC to make up for the loss of the roof as a structural member, while uprated brakes ensure impressive stopping performance. In addition, the CZC comes with twin front and side airbags and ABS, while the top Turbo version also gets active stability and traction control as standard.

With 147bhp under the bonnet, the CZC Turbo is an engaging companion when driven with zest. From 3,000rpm onwards the little 1.5-litre engine delivers rapid acceleration, and with the roof down it feels even quicker. The steering has a firm weighting which makes it stable through bends, and while the suspension is biased slightly towards handling, it still does a good job of coping with road imperfections. At a more leisurely pace the Colt is relatively quiet, although wind noise does pick up around motorway speeds.

Although the boot space is useful, the lack of genuine rear seat room makes the CZC a little unsuited to family duties. Only small children will fit in the rear seats, even with the front seats moved far forward.

With its compact dimensions and ease of driving the CZC Turbo would present no problems for a new driver, but the purchase price and insurance costs may well be beyond the average first car buyer.

In top spec Turbo guise the CZC does feel quite special, as the whole car feels well constructed and sturdy. All the switches and controls operate well, as does the most crucial element, the folding metal roof. In terms of image, the CZC's distinctive styling and the relative rarity of the Colt hatchback gives it a positive image, some of the undoubted kudos of the high performance Lancer Evo versions rubbing off on it.

With the roof down, access is a breeze for those in the front, though it is important to note that the edge of the screen pillar is relatively far forward, though only the inattentive will make contact. The rear seats are also easy to get to, although the amount of room on offer is pretty small. Access to the generous boot is easy, although the aperture is restricted with the roof folded.

Fitted as standard to all CZC models is a six-speaker CD/tuner with Mp3 compatibility. It is mounted high in the dash for easy use, and has large, clearly labelled buttons. Sound quality is good, with a powerful output able to cope with roof-down motoring.

Turbo models benefit from part leather interior trim, which helps to lift the cabin above the feel of the regular Colt hatchback. The plastics used may not be the softest in the segment, but they are robust and give the CZC a solid feel. Most models have a grey interior trim that can be a little dark, but buyers wishing for a brighter feel can choose orange exterior paint that comes with orange interior details as standard.

Compared to the regular hatchback version, the Colt CZC has reduced rearward visibility, which does make reversing a little more difficult. However, the Colt's size and manoeuvrability do count in its favour, and it is still possible to squeeze it into a small parking space with little effort.

Mini One Convertible Highly desirable and pricey, but quality shines through