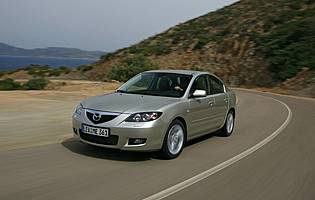 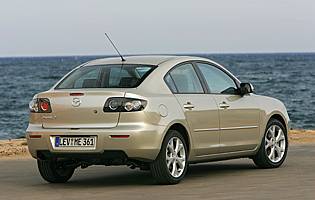 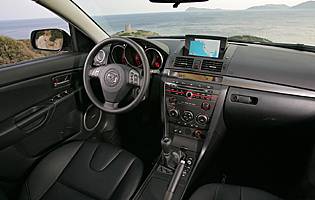 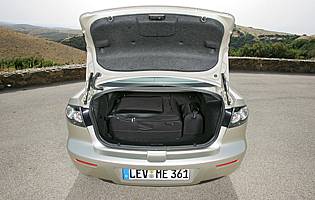 After years of producing 'worthy but ever so slightly dull' family cars, recent years have seen Mazda pull some surprisingly good models out of its hat. Along with the 6 and RX-8, the company's medium size family car, predictably named 3, has been part of the revival.

Mazda might have struggled in the past, but recently there's been a welcome shift towards more distinctive offerings. You won't find any of the company's cars hiding in the shadows, least of all the Mazda 3.

You wouldn't immediately think that the 3 shares its basic underpinnings with Ford's Focus - Mazda is part of the mighty Blue Oval group - but that's not the only surprise. Along with a proven heritage, the 3 boasts levels of cabin quality and refinement that would shame something from the compact executive sector.

It wasn't always like that; from launch the car was merely very good. Mazda's policy of continual improvement has led to a car that might look no different from the outside - there are modest styling tweaks - but moves the refinement goalposts a little further.

And while it's true that the saloon version will never sell in the same numbers as the hatchback, with the car's above average levels of refinement, it could be considered as an alternative to the regular gaggle of compact executive saloons. Granted it's a leap, but not a big one.

Our verdict on the Mazda Mazda3 1.6D TS2 4dr Saloon

The dedicated way in which Mazda has improved the 3 is impressive. You won't immediately spot all the improvements, but after a few miles behind the wheel they start to make sense. Like the car, the changes are modest, but added together they lift the car to a new level. If you want all the benefits of executive motoring without paying a premium, the Mazda 3 might not be an immediately obvious choice but it's a worthy one.

Good fuel economy, even from the petrol variants, coupled with a sensible asking price and generous levels of standard kit make this Mazda a value for money package. Factor in the company's reputation for producing reliable, durable cars and visits to the dealership should be infrequent. Insurance costs should be modest, while some revised models have dropped a tax band, which should please company car drivers.

For a car essentially based on Ford's Focus, cabin space is good. Volvo's S40 also shares the Focus platform, yet it feels a little smaller inside, which immediately puts the Mazda in an even better light. Cabin space in the back isn't fantastic, but legroom shouldn't be an issue for passengers of average size. Storage options are numerous, with the door bins, glovebox and centre console areas proving useful. At the rear, the car's stubby saloon boot opens to reveal a surprisingly accommodating load space. Granted, loading odd-shaped items will be a challenge, but in the course of normal events, there appears to be no downside to choosing the saloon over the hatch for aesthetic reasons.

Clear, concise displays and intuitive controls put the 3 on a footing with more expensive machinery, The red hue of the backlights might prove tiring for some, but the warm glow is rather soothing. All the main controls fall easy to hand, and there are supplementary ones on the steering wheel for the audio unit.

This is an area where the 3 really excels, and highlights the good job done by the engineers. There are no obvious outward clues as to the improvements, but on even the shortest of journeys the benefits are obvious. Ride comfort and refinement levels are excellent. Aerodynamic tweaks to the car's underbody have reduced noise levels, with an added bonus of helping to improve fuel economy. Inside, the car's seats are supportive, space is not an issue and under normal circumstances the engines are unobtrusive.

You get the usual package of anti-theft measures with the car, which runs to an alarm and immobiliser, remote central locking plus deadlocking. Realistically, the 3 isn't a car that stands out, so it's unlikely to attract the same amount of attention as something with a higher profile.

Safety equipment provision is equal to other cars in this sector, as you get the usual array of front and side airbags plus a host of electronic stability aides, and anti-locking brakes. Isofix child seat mounting points for the rear seats are also present.

With its chassis essentially borrowed from the second generation Ford Focus, the driving experience is a good one. While not as engaging as the Ford, the Mazda's bias towards refinement still allows a fair bit of fun if you so desire. Ride quality is also good, although steering feel could be better for the press on driver. The engine range, like the car, offers modest levels of power. While more than adequate in normal situations, even the diesel units need to be revved surprisingly hard if rapid acceleration is required when, say, overtaking.

Not really a family car, the 3 saloon is more of a mini executive motor. That said, access to the rear part of the cabin is good - making it relatively easy to affix a child seat without too much trouble. The car's boot is a good size, but access to it is hampered by the saloon format - the five-door hatch would be more practical.

An easy car to drive, the 3 is likely to appeal to a broad number of drivers - including newly qualified ones. Light controls, affordable running costs and its compact size all add up to a refreshing alternative the mainstream offers from Ford and Vauxhall.

There's no question that the Mazda 3 is built well - almost well enough to rival certain cars in the traditional compact premium sector. The issue Mazda has is communicating this successfully to prospective buyers who still think the company makes worthy but dull cars for the mature drivers. The 3, like the rest of the Mazda line-up, is surprisingly rewarding to drive, and the long term challenge remains one of attracting younger buyers to the brand.

Access and egress to and from the front of the cabin is straightforward. A slightly raised seating position helps, although this can be adjusted lower if desired. As befits a compact saloon, rear accessibility is less impressive, though the smaller door aperture still allows you to get in and out without having to contort yourself too much.

The unique fit audio unit sits high up in the car's fascia. The controls can, initially, feel a little fiddly, but you soon get used to them and the unit's small display. The basic controls are duplicated on the steering wheel, and there are a number of upgrades: CD changer and sat-nav. The latter pops up out of the top of the fascia with its controls placed down by the gearlever, which some people might find a bit odd.

Traditional exterior colours such as silver work well on the Mazda 3, emphasising its premium qualities. However, it also looks good in bright colours, which is something that can't always be said about its rivals. Inside the car it's a bit dark; the cabin materials and seat fabrics mirror that of BMW's 3 Series. Thankfully the Mazda's centre console is light enough to lift the cabin ambience.

Although not a large car, the Mazda 3's bonnet is a big one and can make judging parking in tight spaces a little tricky - patience and practice usually resolves this issue. At the back, the car's moderately shallow rear window and stubby saloon boot can make judging gaps a little harder than usual. But again, familiarity will ultimately help matters. Light power steering is a welcome bonus, as are the optional parking sensors.

Volvo S40 Compact Volvo can feel sparse inside, but is well built and safe

Ford Focus saloon Popular Focus is a competent car, but saloon can look awkward from some angles

Volkswagen Jetta Downsized Passat is classy and good to drive. Not that cheap, though