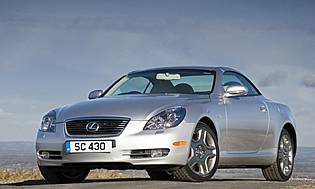 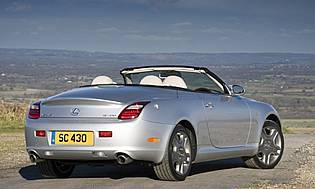 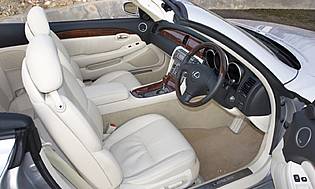 An essential model for any luxury car manufacturer is a coupe, and for Lexus the SC430 spearheads its range. Revised in 2006 for improved performance, economy and refinement, the SC430 has the difficult job of competing with some of the most desirable cars on sale, and to succeed it needs a strong combination of abilities.

The SC430 is based largely on the mechanicals of the previous generation LS saloon, and while this means it benefits from a refined V8 petrol engine and a responsive six-speed automatic gearbox, other elements of the package are beginning to feel a little dated.

A key element to any car in this class is the exterior styling. Although showing more invention and curves than many of its rivals, the overall result is not necessarily a happy one. From some angles the SC430 looks under-tyred, with the wheelarches hanging over the wheels by some margin, giving it a narrow look. Combined with the pronounced curves it can appear a little bloated, which puts it at a disadvantage compared with more modern rivals.

The SC430 is also more clearly focused towards being a comfortable car, with a relatively soft suspension set-up. Although the engine and gearbox can be tailored to deliver impressive performance, the rest of the car feels less able to keep up, yet a blend of sport and comfort is a common feature of most of its rivals, leaving the SC430 as something of a separate choice.

Inside the SC430 also has positive and negative points. The general layout of the cabin is good, with clear, well-labelled controls and much of the cabin is finished in high quality leather and wood. Counting against it is a slightly dated feel, as the interior layout and design is clearly a generation behind other cars in the Lexus range.

Our verdict on the Lexus SC SC430

The SC430 is pitched into a highly competitive market, and though it offers a drive quite different to many of its rivals, this may limit its overall appeal. Although the Lexus is quite competent in many areas it lacks the spark, which may be required to provoke enthusiasm in the buying public.

Running costs for the SC430 will be relatively high, thanks to the below average fuel economy and high insurance costs. The initial purchase is also high.

Front seat passengers have plenty of head and legroom, but the rear seats are for occasional use only. Even with the front seats moved well forward, legroom is restricted. The boot is an unusual shape, and also rather shallow, so a respectable volume of items can be carried as long as they are a suitable shape.

The layout of the SC430 is impressive, with attractive back-lit instruments and clear displays. The centre console has large, clearly labelled buttons and a large screen, and the same is true of the audio system.

This is the SC430s strongest area, with supportive seats and low noise levels. The ride quality is also good, filtering out most of the worst bumps for relaxed progress and the engine refinement is impressive.

As standard, the SC430 is fitted with remote double locking, an alarm and immobiliser for a high level of security, which Lexus models are well known for.

The SC430 is packed with active safety devices, including traction control, ABS and the Vehicle Stability System. It is also fitted with Adaptive Front Lighting, which is a useful feature at night.

The SC430 is at its best when cruising. The excellent engine refinement, decent ride and low noise levels give it the ability to cover distances with ease, although when called upon, the engine can deliver impressive acceleration. Press on a little more and it is less able, as the soft suspension and steering discourage enthusiastic driving.

The lack of decent rear seat space is likely to rule out the SC430 as a family car, as will the amount of bootspace on offer.

The SC430 is not suitable as a first car, due to its expense and performance. It is also unlikely to appeal to younger drivers.

The quality of the SC430 is not in question, as inside and out the fit and finish are excellent, and it should prove to be a very reliable car to own. The Lexus badge, although relatively new compared to its rivals, is also respected for its high quality reputation. The image of the SC430 benefits from this too, although it may be regarded as more of a cruiser than a sports car, like many of its rivals, due to the curvy rather than dramatic styling.

Front seat passengers will have no trouble getting comfortable, and usefully the driver's steering wheel can be set to move out of the way when the key is removed for even easier access. The rear seats are more difficult to get to, for although the seats will tilt, the seat button must be pressed to move the seat forward electrically. Access to the boot is also a little awkward, as there is no obvious handle.

The SC430 is fitted with a Mark Levinson audio system, which features nine speakers and radio/CD/cassette inputs. It delivers a very high standard of sound quality, and is clearly audible even with the roof folded down.

The cabin of the SC430 uses high quality leathers and plastics, and a generous use of wood veneer. The combination of light leather colours and wood gives the cabin a warm and bright feel, and reinforces the feeling of quality.

The SC430, like many cars in this class, is not the easiest to park, thanks to long front and rear overhangs and a relatively small rear window. Although the automatic transmission makes slow movements easy to achieve, the reduced visibility and the lack of parking sensors can make certain spaces a challenge.

BMW 6 Series Convertible Capable and individual, looks may not suit all

Porsche 911 Cabriolet Most driver-focused car in the class