Exterior is smarter in F-Sport trim 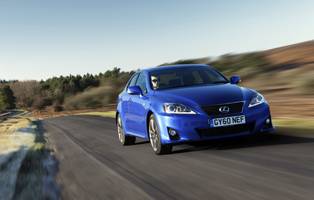 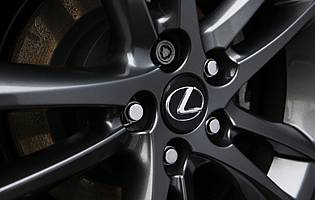 The IS has been the Lexus contender in the small premium saloon segment since the 1990s, while this second-generation version appeared in 2005 with an all-new exterior and a multitude of changes throughout. As ever the competition continues to improve, and hence the IS has been updated once again, including a new trim level and diesel engine to give buyers greater choice.

The compact premium sector is one of the most image-conscious segments of them all, which accounts for the dominance of the familiar German brands - notwithstanding their excellence. The IS follows in the same tyre tracks and although it has elements of sportiness that all the big players aim for, it is more discreet in appearance and much less ostentatious, and in doing so appeals to a more discreet buyer.

However, Lexus has added a more sporty trim designation to the range to increase both visual and driving appeal. The F-Sport model takes its cues from the high performance IS-F, and has a similar if not identical exterior appearance thanks to larger alloy wheels, a deep front spoiler and another spoiler on the boot lid. It comes with a choice of petrol or diesel engines as well as sportier suspension and interior enhancements.

All the engines have received detail changes to ensure they comply with Euro 5 emission regulations, but in the case of the diesel option it has been replaced. What was the IS220d is now the IS200d, and although that suggests a reduction in engine capacity in fact it is simply a heavily revised version of the outgoing 2.2-litre unit.

Across the entire range the specification has also been enhanced, with SE-I models benefitting from rain-sensing wipers, a auto-diming rear view mirror and new leather upholstery with heated seats as standard. Visual changes to all models include revised tail lights and a circular exhaust pipe. The standard IS remains a relatively conservative design and is all the better for it, but the F-Sport version offers a welcome visual boost particular in the new Ultra Blue metallic paint option.

Our verdict on the Lexus IS 200d F-Sport

Alternatives to the default German offerings in the compact saloon segment are welcome, and the IS does offer something a little different. The standard car is a little more comfort biased and although the F-Sport version reverses that somewhat, it achieves a good balance between ride quality and handling. Although not the most stylish choice, it is likely to represent a sensible and satisfying ownership prospect.

Once on the driveway the IS should be a relatively inexpensive car to own. Very respectable fuel economy and emissions performance will keep running costs down, and insurance costs will be helped by the impressive security reputation.

The IS has useful folding door bins, a good centre console and a reasonable glovebox, and on a larger scale the boot is a good size and well shaped. The key issue is rear seat space however, and only a test drive will determine if there is enough space for rear seat passengers to sit behind regular front seat occupants.

The set-up of controls and displays is logical and clear inside the Lexus, and even without the help of the handbook it is easy to operate and understand the layout. With touchscreen control for many of the functions and further controls on the steering wheel, getting the most out of the IS is easy.

Plump for the F-Sport model and you trade a little in terms of ride comfort for an increase in handling sharpness and response, but even so it remains a comfortable saloon car. General refinement is impressive and this trim level also adds sports seats that offer useful extra support.

A measure of the security provision on the IS is the fact that there are almost no options in this area: remote keyless entry and start, deadlocks, an immobiliser and a comprehensive alarm system are all standard.

A very high standard of safety specification is included right across the IS range, with eight airbags and a clever vehicle dynamic control system across the range at no extra cost.

The engine in the IS200d is a good example of how a modern diesel can provide a good balance of economy and performance. The six-speed gearbox has a good shift action although it feels unnaturally angles towards the driver which takes a little getting used to. However, the four-cylinder unit is refined and delivers decent punch once the rev counter has passed 2,000rpm. There is little in the way of noise transfer into the cabin, and the economy and performance figures speak for themselves.

A modestly-sized family could certainly fit within the confines of an IS, and the boot is big enough too to cope with most eventualities. However, taller children might not be happy with the amount of legroom on offer.

It seems unlikely that a new driver will be attracted to the IS, although it is a handsome machine in the right specification. However it is certainly easy to drive and likely to be relatively cheap to run, if not a cheap car to buy in the first place.

One area in which Lexus has a good reputation is for quality, and throughout the cabin the IS displays obvious attention to build quality. It might not quite reach the very high standard of material finish as Audi, but longevity is unlikely to be an issue. In image terms the Lexus does lag behind the opposition, although sportier version like the F-Sport and ISF do help boost the brand image.

The IS is one of the older cars in this class now, and so it fractionally trails the opposition in this respect. Those entering the front seats will have no problem and at the rear the aperture is fine, but the slight limitation in legroom can make it more difficult for less able passengers.

Depending on the model the IS comes with a good quality audio system with touch screen control. As well as USB connection and Bluetooth as standard, the higher specification Mark Levinsion versions have dynamic sound processing, 14 speakers and DAB radio for excellent sound quality.

In more sober shades the IS can look a little anonymous, but the F-Sport trim adds more muscle to the shape. Choose the bright Ultra Blue metallic colour and it is a far more desirable car. The cabin is less appealing when finished in black or dark grey but the lighter cream shade may not be to all tastes.

The IS has a relatively narrow rear window and a high boot lid which does restrict the rear view slightly, but some models gain a reversing camera and sensors which make short work of pulling into a space.

BMW 3-Series Still the most popular choice thanks to dynamics, design and image

Audi A4 Hugely popular thanks to huge range, good engines and smart design