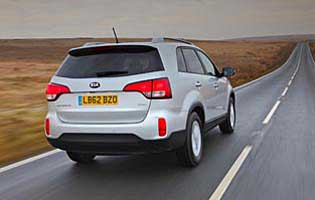 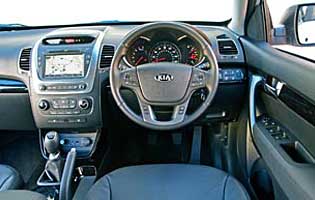 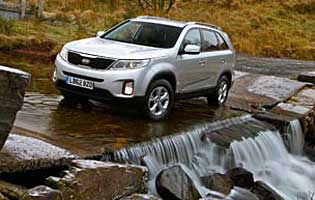 North American buyers have appreciated Kia's products for many years, in particular its SUV offerings. Sport Utility Vehicles are the backbone of American car culture, and Kia has done much to deliver competent, wallet-friendly cars to an appreciative audience. Recent years have also seen this formula start to work in Europe.

Kia's Sorento is, by European standards at least, a large SUV. It also happens to be a working vehicle, thanks in the main to a robust transmission system, excellent towing capability and the inclusion of a proper all-wheel drive system. In line with the major revisions to this generation of Sorento, 4x4 now comes as standard along with a gutsy 2.2-litre diesel engine.

While the car might look familiar to Sorento fans, this version sees Kia switch to an all-new platform, the aforementioned powertrain and make numerous detailed changes to the car's suspension set-up. The end result is a much more accomplished car on the road, with the promise of reduced running costs due to engine efficiency improvements.

Aside from the subtle exterior design changes, Kia has also gently improved the Sorento's cabin. The result is a more upmarket ambience thanks to the presence of higher grade plastics and upholstery materials, while changes to switchgear and displays have led to a more intuitive and less cluttered environment for the driver.

For all the changes, which includes the introduction of a seven-seat variant as the default choice, the Sorento remains a solid performing SUV for families with an active lifestyle and those who view the car as a working tool. Either way, it's well equipped and now a more rewarding car to drive, an attribute that's the direct result of Kia's bold decision to adopt a new platform partway through the model's lifecycle.

Our verdict on the Kia Sorento KX-3 2.2 CRDi

While the Sorento doesn't pretend to be a premium SUV, it's much closer to the mark than makers of posh SUVs would like to admit. This latest incarnation offers a plush cabin, a solid driving experience and an abundance of high-value standard equipment across the range. With its generous warranty package and contemporary looks, the Sorento easily highlights the shortcomings of many of its more expensive rivals.

Like all Kias, the Sorento is competitively priced - especially when you consider the car's high level of standard kit. Running costs should also be modest thanks to efficiency gains over the previous model. And don't forget Kia's generous warranty package

This large vehicle offers up plenty of space for passengers and other cargo. The car's exterior dimensions might not have changed but there have been small but welcome improvements for occupants. The split-fold second row and fold flat third row allow for some seriously large items to be carried, while there's ample oddment storage in the cabin.

Much effort has gone into updating the Sorento's main controls and displays, with the end result logically laid out and easy to use cabin. The displays are crisp and easy on the eye, while the dominant touchscreen interface proves intuitive. The flagship Sorento gains an electronic TFT main display, which allows more information to be presented to the driver in an uncluttered and clear manner.

One of the many upsides to Kia's decision to adopt and all-new platform for the Sorento has been a noticeable increase in comfort, refinement and sound insulation when on the move. Small increases in space for second and third row occupants are also worth noting.

Lifestyle SUVs are a regular target for opportunistic thieves who tend to assume that owners have plenty of money and are likely to have left valuables inside. Kia has thoughtfully included a comprehensive anti-theft system as standard, while the cabin's various storage areas offer plenty of protection form prying eyes.

Despite its modest price tag, the Sorento boasts a good level of safety kit. Six airbags and a host of electronic traction and stability aids should ensure that every eventuality is catered for. Factor in the car's all-wheel drive and, rain or shine, confidence-inspiring grip is always available.

Compared to Sorentos past, this version boasts a new platform and numerous changes to its suspension set-up. The result is a much sharper handling car, and one that's also more refined and composed at speed. Another key improvement is in the engine department, with Kia adopting a 2.2-litre, 194bhp diesel across the range that's more powerful and cleaner than its predecessor. Factor in permanent all-wheel drive and the Sorento is an impressive all-rounder.

There is no denying that the Sorento ticks most of the necessary boxes when it comes to performing as a family-friendly car. It's robust, spacious, safe and even cool enough to avoid the upturned noses of teenage fashion victims. The car's all terrain credentials would fit well with an active family lifestyle, too.

The Sorento makes little sense as a novice's choice unless the first thing they want to do is tow a caravan. For a genuine first car experience something like Kia's own Picanto would be a better choice.

Kia has really sharpened up its act in the recent years. The Sorento doesn't achieve genuine premium SUV status but gives a pretty good imitation of a much more expensive vehicle thanks to the intelligent choices of cabin materials on display and the car's much improved driving dynamics. Kia's generous warranty programme has also enhanced the brand's standing.

Given the Sorento's size a pronounced step up is required when accessing the cabin, which might prove too much for some users. But this does mean that, once inside, you benefit from a commanding view in all directions. The boot has lots of assistance from its struts and is easy to open.

The standard issue audio unit is surprisingly good, and is located high up in the car's fascia for ease of access. The colour touchscreen makes light work of navigating the different menus, and does much to enhance the ease of use element for Kia's sat-nav option.

This is a large vehicle yet it boasts a deceptively compact turning circle. That said, parking sensors are a real boon as does the reversing camera feature where fitted. Light but accurate steering plus good all-round visibility also helps matters.

SsangYong Rexton Solid, capable and dependable but lacking the aesthetic appeal of its rivals