Subtle bodykit gives the i30 Turbo a visual lift 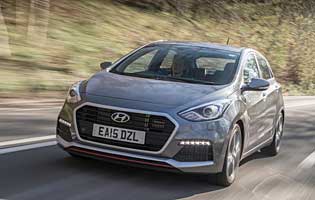 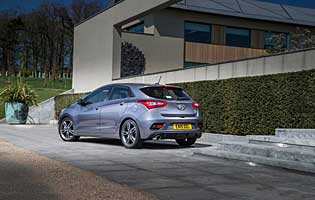 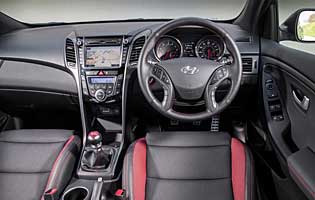 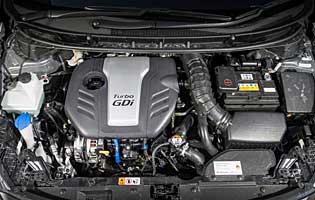 With a firmly established reputation for value and good quality, Hyundai has announced a new direction for its latest i30 model with the introduction of the Turbo version. Designed to offer a more sporting approach than traditional Hyundai models, the i30 Turbo is a medium hot hatch with many of the expected features for a car in this class.

The previous generation i30 was the first i-branded car Hyundai released, and it began to banish memories of the cheap old things the company used to make. Again it has been chosen as the figurehead of a new era for Hyundai cars, with better driving dynamics alongside higher-quality interior materials and much more emphasis on style.

In a mark of how far the brand has progressed and in particular the i30 itself, it would have been inconceivable 10 years ago that a performance model would have been offered, but the i30 Turbo is a testament to the increasing appeal of the brand and that it can win customers over with more than just keen pricing and length specifications.

The mechanical changes to the i30 Turbo are significant, with the most important of these being the more powerful engine. In addition, there is a six-speed manual gearbox taking drive to the front wheels, while the suspension has been lowered and stiffened to provide a sharper drive. The diameter of the brake discs has also been increased to cope with the extra performance.

There are plenty of visual changes to the i30 Turbo too, including a new grille, larger front and rear bumpers with red detailing, standard 18-inch alloy wheels and a new design of front LEDs. Inside there are standard sports seats, black headlining, sports instruments and more red detailing to provide a visual link to the exterior.

Our verdict on the Hyundai i30 Turbo

As an alternative to more mainstream hot hatch offerings the i30 Turbo is fun if not at the cutting edge of the sector. It's as easy to live with as any other i30 and shouldn't demand too much more in terms of running costs. Enthusiasts may want to look elsewhere, but buyers looking for a little more excitement in their daily drive should take a closer look.

The i30 Turbo is good value compared to its competitors, although it is the most expensive model in the i30 range. Running costs will be higher than any other i30 model too, although the engine is quite efficient for one offering this level of performance. Expect insurance costs to be a little higher too, although Hyundai's excellent warranty is a useful bonus.

The i30 has a large boot, despite giving a little away in terms of overall size to some competitors. Its 378-litre capacity makes it among the biggest in the sector, and being particularly deep it's good for stacking items. It's deceptively large and if used to its fullest potential this is a very practical car. Cabin storage solutions are plentiful and varied in shape and size. Legroom is more than adequate for all occupants, but trying to place three adults across the rear bench seat is asking too much.

The instrument cluster is excellent, with an attractive cowling around the clocks themselves and a splash of colour to lift display. A digital LCD panel in between the main dials offers clear information in a nicely modern way. On the centre console panel the buttons are larger than some in other cars, making them easy to locate and use. Most of the controls are exactly as most people would expect to find them.

The standard sports seats offer useful extra support over the items in the regular i30, and noise levels are broadly well damped although the engine is relatively noisy at high revs. Less impressive is the ride quality, although as this is a sporting car it is understandable.

Every i30 has remote central locking, an alarm and deadlocks to ensure basic security is taken care of. A Thatcham-approved immobiliser is also included and there are numerous storage areas within the cabin to keep items out of sight.

As standard the i30 has six airbags providing some measure of increased safety for front and outer rear passengers. A driver's knee airbag is optional. Active safety systems apply assistance to the brakes and steering if they need to, and will reduce engine power if wheelspin is detected. Electronic Stability Programme can also brake individual wheels if needed. The brake lights and hazard warning indicators are designed to flash in very obvious ways in an emergency stop scenario, warning following traffic.

While the standard i30 offers a sensible and undemanding driving experience the Turbo version has a little more to offer. The turbocharged engine is responsive, if a little noisy when extended, while the steering is a little sharper than the standard car thanks to a revised steering rack and uprated suspension. Even so the i30 Turbo is less frantic than some of its rivals.

Small families should take a close look at the i30, with its Isofix child seat mounts and large boot. It's a stylish runabout that children won't be ashamed of at the school gates, and despite the interior looking great it's generally quite tough, hard plastic that will stand up well to the inevitable knocks and scrapes that are a fact of any family car's life. It's also well equipped with gadgets that make everyday life easier.

Hyundai is a company on the up, performing extremely well in most world markets. It may still be viewed by some in Britain as a second-rate brand, but little about its actual products would reinforce such a negative view. The second-generation i30's further improved build and materials quality, along with a longer, wider and lower stance give a combined give matching boosts to the actual and perceived quality of both the car and the brand.

With three and five-door versions of the i30 Turbo available there is a version to suit the frequency of access required. Up front the seats are at a sensible height and the roof is not set too low, making access easy. At the rear on five-door models the doors are noticeably shorter, resulting in a smaller aperture, although this is not untypical for a car of this size. At the rear the tailgate is a sensible shape and opens to reveal a good-shaped boot.

The stereo functionality changes slightly between the top trim level and the rest of the range. The Turbo model is equivalent to the Style Nav version with a touch-screen satellite navigation that acts as a clearer interface for music, which can come from CDs, the radio or either of the auxiliary input ports for 3.5mm jacks and USB cables.

With a more rakish exterior the i30 Turbo wears brighter colours better than the standard car, although it still looks good in silver thanks to the red detailing on the bumpers. There's more unique detailing in the cabin, with sports seats and a black headlining giving a higher quality feel.

The i30 Turbo gets front and rear parking sensors as standard, and coupled with its compact dimensions it is an easy car to park. Visibility is somewhat restricted by the relatively steeply-raked shoulder line and narrow rear windscreen, but the parking sensors help to compensate.

Spare wheel or emergency repair kit depending on the model.

Ford Focus ST Sharper to drive and more desirable too

Kia Cee'd 1.6T GDi Shares much with the i30, arguably the better looking of the two