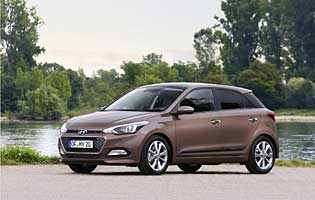 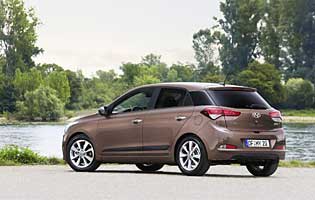 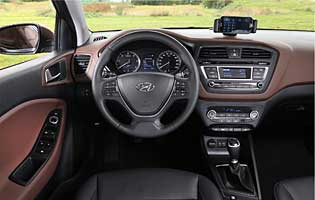 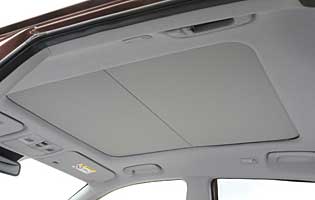 Hyundai has taken yet another two-generation leap forward with a new car, having already brought its supermini i20 forward a phenomenal amount during the last model's lifetime. The 2015 model is sophisticated, stylish and extremely well built, removing most - if not all - of the previously existing reasons not to consider one closely.

In the mid-2000s, Hyundai realised the full extent of its ugly, cheap and disappointing automotive efforts leading up to that point, and began a relentless cycle of change and improvement. Each all-new generation since then has made huge advancements, and this version of the versatile i20 is no exception. Made with Europe in mind, it has extremely high standards.

To compete in an incredibly tough corner of the market against the likes of the Ford Fiesta and Volkswagen Polo, not to mention the ultra-affordable Dacia Sandero and Vauxhall Viva, the i20 has targeted maximum value for money, with lots of standard equipment, build quality as good as anything else in the sector and a new-found injection of high-class style.

Prices have inevitably gone up, but buyers will find a lot more standard equipment, as technologies filter down from their once expensive and exclusive implementations on high-end cars to humble superminis like the i20. A reversing camera with a readout in the rear-view mirror is a highlight, but above all else Hyundai has concentrated on making it feel grown-up.

The Korean firm is particularly targeting the Volkswagen Polo, raising the standard for every part of the i20's driving experience to make it as rounded and impressive as possible. It feels like a mature option that relies on understated class rather than novelty, shunning bold or brash colour schemes in favour of design that won't grow old quickly.

All the ingredients are there for the i20 to make inroads into the supermini market in the UK. It may not have the implied dynamism and excitement of the Ford Fiesta's turbocharged petrol engines, but it does have quality to match or better any rival, as well as excellent reliability, sharp design and an enviable equipment list. The i20 looks the part, feels the part and is priced to sell.

The loss-leading entry-level S model is significantly cheaper than the versions that most people will be likely to want to buy, but comparing its list prices directly to those of its rivals results works in the i20's favour, especially when bearing in mind its standard equipment. There is only one ultra-low emission model, though, and it is only built in basic S trim, which means almost all buyers will have some sort of road tax liability.

A large boot, measuring 326 litres, offers luggage-carrying capacity almost equal to cars from the size class above. It features a two-level boot floor, which can be moved to either maximise overall capacity or to leave a flat load lip for ease of loading and unloading heavy items. Large door bins make room for wide drinks, including typical 1.5-litre and 1.0-litre bottles of mineral water in the front and rear respectively. This is an unusual but welcome feature in such a compact car.

Hyundai has laid the main instrument cluster out with its eye primarily on ease of legibility at a glance, and the straightforward white-on-black design is exceptionally successful in that regard. It could benefit from a few colourful design flourishes, though. The central LCD screen between the speedometer and rev counter is good, offering a huge variety of data readouts, but again it is perhaps a little over-simple in its design.

There is a higher-than-average degree of support on offer from the i20's front seats, especially laterally, which helps to keep people in place and impart an increased sense of stability and safety around corners. The seats themselves are blessed with a good balance of softness for short journeys and firmness for increased support on long trips. The driver has an armrest, too, although the driving position does not adjust as much as it could.

Remote central locking is standard on all i20s, so there will be no need to put the key in the door or have passengers lock their own doors, as can be necessary on some cheap cars. Deadlocks are included in the system. The central storage bin between the front seats provides secure storage for all models, while Premium and Premium SE grades also feature darkened privacy glass around the rear half of the car.

While a quota of six airbags does not quite match the class leaders, the i20 has the self-explanatory Hill Start Assist, stability control, tyre pressure monitors, a speed limiter and the option to add lane-departure warnings. Overall, the car is more or less at the forefront of safety provision for vehicles of this size. Increased use of high- and ultra-high-tensile steels have also helped to strengthen the car's shell while making it lighter.

The i20 is amazingly well refined, with well-damped suspension controlling the impacts from bumps and keeping body roll to an impressive minimum. It is a stable drive that feels much more like a larger car than the older i20 did. The engines are smooth, responsive and provide immediate performance in town; especially the sprightly 1.2, but none can keep the good news going at motorway speeds, where they run out of breath.

Thanks to intelligent packaging the i20 could conceivably be used as a family car for parents of young children. There is enough space on the rear seats, and child-friendly features like an off-switch for the front passenger seat forward airbag, and ISOFIX child seat mounts on the outer rear seats. The boot is large enough for a tightly-folding pushchair and associated paraphernalia. Families may also be wise to consider the i20 as a second car to accompany a larger one.

It looks fantastic, is affordable to buy and run, is easy to park, should last the test of time and has a long warranty to provide peace of mind. Its combination of assets could make it very appealing to a first-time car buyer. Five doors as standard is a useful facet for carrying friends, and a full suite of connectivity options will appeal to younger buyers.

The huge upswing in the quality of Hyundai's cars inside 10 years has to be seen and felt to be believed. From the seat stitching to the panel fit, the feel of the interior controls and the paint finish, the i20 must now be considered a quality product. Hyundai's image is strong with older buyers who value the five-year warranty that comes with its cars, but such attractive styling as the i20 boasts will surely begin to win younger hearts.

Most cars of this size and type bias their available space towards the front passengers, since rear occupants here are more likely to be children, or infrequent. In line with that, the i20 offers good access for front seat occupants but a slightly pinched aperture for those in the back, particularly for larger feet. This generation of i20 has longer doors than its predecessor, but it's lower and that does necessitate a slightly more pronounced duck on the way in and out.

USB and AUX connectors are immediately obvious from the driver's seat, but there is also Bluetooth wireless audio transmission on all but the basic S models. There is no CD player on S models, either, although SE grades also gain additional speakers to improve the audio experience, as well as steering wheel-mounted audio controls. Premium and Premium SE models add speakers in the rear doors.

Hyundai has taken the unusual step of providing a number of interior trim colours, but linking each one to a particular exterior paint shade. Even more oddly, the most desirable black interior is limited only to an orange paint, which will suit some tastes more than others. The new and confident lines look good in all colours, fortunately, but the beige interior is a little drab. The dashboard and centre console look neat, upmarket and organised.

A car of the i20's size should never be difficult to park, and the i20 isn't. It uses no special driver-selectable parking modes, but features a variable steering system that automatically lightens the load at low speed to make manoeuvring easier. SE models feature rear parking sensors, while only the Premium SE includes front sensors as well. A reversing camera is available at the car's launch, but only as a factory option and only when linked with satellite navigation.

Ford Fiesta Still the biggest seller in the sector, the Fiesta is a firm favourite with a broad range