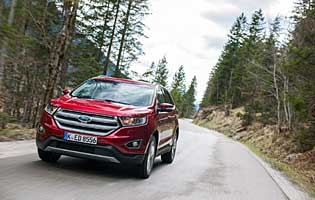 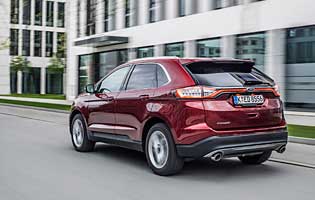 The Edge marks an entry into an unfamiliar part of the market for Ford in Europe. Never before has it sold a large SUV on this continent and the company is looking to raise its game to compete with highly profitable models from German premium brands. To build it Ford has combined its four-wheel-drive know-how with the latest Mondeo chassis. The platform beneath the Mondeo was judged to be the right size, but has been strengthened and raised for the Edge.

The SUV, at 4.8 metres long, was never intended to carry seven people in the way that the Land Rover Discovery Sport optionally can. Instead, it simply maximises the amount of available room for five people. Ford's experience in Europe, covering a broad range of road types from bumpy B-roads to smooth, derestricted autobahns in Germany, has heavily influenced the chassis development to ensure the new car can handle both extremes when it leaves the factory in North America.

Different global markets have certain specification tweaks, but all are at heart the same. To begin with Ford is only bringing one diesel engine to the UK, in two states of tune. There is a fairly inconsequential 30bhp between them, but a more significant 37lb/ft over a broad torque curve. The Edge is a heavy vehicle and feels it, and the stronger engine handles acceleration that bit more comfortably.

It has clearly been built for family life by people who have families themselves. A long list of small but very welcome practicality features like a pair of bag hooks in the boot, a spare wheel and cabin storage galore help to make it very easy to live with. It's worth noting, though, that models on the larger wheels ride less comfortably.

Our verdict on the Ford Edge 2.0 TDCi Titanium

To look at the Edge in Sport and Titanium trim grades is almost like looking at two different cars, and while the former stays flatter around corners and looks more 'sport' than 'utility vehicle', the Titanium looks less aggressive and more like a straight-laced family SUV. It feels like it, too, with a good ride quality, lots of equipment and ample space for the whole family.

The Edge is expensive enough to position itself alongside cars from Audi, BMW, Mercedes and Jaguar, as well as Lexus. It simply can't match some of them for badge appeal, others for materials quality, others for style and still others for reliability. The Ford succeeds with its sheer interior space for the price, but still feels expensive. Running costs will be competitive but not class-leading, and businesses in particular will be better off with a hybrid Lexus.

More than 600 litres of load space is available in the boot without breaching the luggage cover. Load to the roof and there is 800 litres. Fold the rear seats and that rises all the way to 1,847 litres. Ford claims that with the rear seats in place there is more than a metre of load length in the boot, with 1.9 metres to the back of the front seats. Some of the materials might not stand up to serious practicality tests, though. The relatively large 68.9-litre fuel tank means long stints between fuel stops if used mainly for gentle cruising.

Controls and display
The familiar sat-nav unit could respond more reliably to touch, but its layout and graphics are good. A four-way split on the home screen shows all the basics across media, navigation, phone and trip info in a very handy way, but tapping any section expands it. It's highly intuitive. Ford has squeezed a lot of controls into the available space and it can be a little daunting at first. The two useful colour screens inside the instrument binnacle are controlled by separate sets of steering wheel-mounted arrow buttons.

Being so wide gives the Edge incredible space around the two chunky and largely supportive front seats. So much, in fact, that some drivers might actually feel slightly uncomfortable. Rear passengers are the chief beneficiaries, with three people able to sit side-by-side without having to press against one another. There is also a huge amount of legroom for five. The one common complaint at all seat locations is that the bases are too short, offering too little under-thigh support.

Ford includes a basic Thatcham Category 1 alarm and an engine immobiliser as standard. The rear half of the car has slightly darkened glass but not so much so that it might stop a potential thief from seeing inside. It's also quite a noticeable car with a lot of expensive parts on board, so it could potentially join the ranks of premium SUVs already regularly targeted by thieves.

Lane-keeping technology and automatic headlights and windscreen wipers are standard, but much of the potential safety highlights are optional extras, like the front wide-view camera, which gives a 180-degree view from the front of the car and lets the driver see oncoming traffic without having to creep out into its path. Active Park Assist, blind spot warnings and pre-collision assist, which comes with the adaptive cruise control, are all cost-options. Disappointing on a car at this price.

Titanium models roll a little more through corners than Sport equivalents, which are fitted with firmer sports suspension. But in either version it can be difficult to get past the sheer size of the car in order to enjoy driving it. The width is especially challenging on winding roads. Instead, the Edge surprises with its incredibly quiet cabin and resulting long-leggedness thanks to its standard Active Noise Control.

Ford has aimed the Edge directly at families, so the high roof, high rear seats and large boot all make living with children easier. The rear seats are set at an easy height for installing a child safety restraint, for example, and the boot will swallow everything from pushchairs to toy boxes. The optional perforated leather seats could be vulnerable to food and drink spills so for messy kids it's better to stick to the standard cloth or add seat covers.

Few if any first time car buyers are likely to even look at the Edge. Its size, price and family car design put it way out of suitable first car territory. The sheer width of the thing would be hard for any novice to deal with on the UK's very varied public roads and car parks.

From the perspective of comparing the Edge to other Fords, the tangible materials and build quality is high. The doors shut with a solid thunk, there are no rattles or areas of suspect trim fit, and it generally feels well built. The image is more of a problem, with premium German rivals available for the same price as the Edge. It is something different, but whether it is truly premium enough to tempt buyers away from Audi and Mercedes is another matter.

The Edge is quite tall and needs to be stepped into rather than dropped into. It has a high driving position as a result, giving the commanding view of an even larger SUV. The rear doors are just about long enough for comfort, but some people will still have to take care to get their feet through the aperture without catching the surrounding trim. From Titanium level upwards the powered tailgate is standard.

The stereo can be controlled using steering wheel-mounted controls, voice control and a touch-screen interface. There are options for DAB, AM and FM radio reception, or occupants can turn instead to the CD player, MP3 player connectivity or Bluetooth wireless link. There is also a clever Active Noise Control feature that measures and counteracts ambient noise from the engine, wind roar and tyres, helping to make the stereo clearer. A Sony upgrade is likely to be popular.

As standard the Edge comes with cloth upholstery, which looks fine but is outclassed by the leather that can be added as part of the optional Lux Pack. Black is preferable to the grey option, which lightens the cabin but looks dated by comparison. The interior aesthetics are a clear improvement for Ford that is essential at this price point, but some might say it still lacks a certain sense of class in the design. There are, fortunately, some beautiful colour options for the exterior paint that do add style.

It is unusually difficult to judge where the corners of the Edge are, making it an unwieldy thing in car parks. It's also wider than ideal for the purpose, and in many instances a driver will find that a standard parking space leaves little or no room to open doors. Ford has installed parking aids as standard, with a rear-view camera on the Zetec, additional front and rear parking sensors on the Titanium and Adaptive Steering on the Sport, which lightens the load at low speeds.