Unusual design is best appreciated in a loud colour 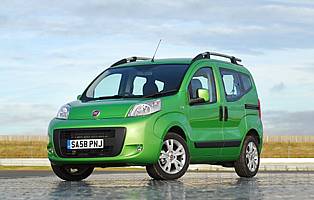 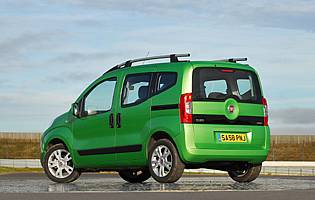 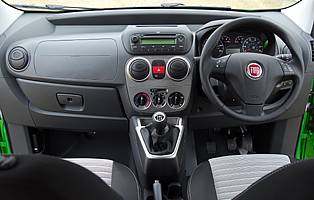 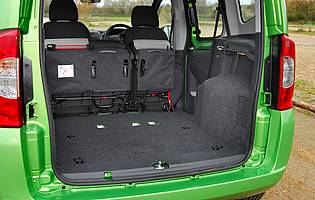 Fiat built its reputation on the strength of its small cars, and adding to the already impressive line up comes the Qubo, a new take on the small MPV that uses the Grande Punto as a starting point but also takes influences from much bigger cars in the range.

One look at the Qubo illustrates its place in the market. With a very high roofline, squared-off flanks and a vertical rear tailgate, the Qubo makes the most of its relatively compact footprint to give maximum cabin space, putting it in contention with the most practical cars at this end of the market. Although the Qubo shares some similarities with the commercial-based Doblo, the smaller Qubo is in fact car-based, which should benefit passengers.

The Qubo is intended to be a high value MPV, and as such comes in just two trim levels and with two engine options. The entry-level Active version is priced in line with mid-range superminis, and hence is a viable alternative for buyers on a limited budget. Despite this, all versions come with power steering, electric front windows and Bluetooth phone connectivity as standard, a rarity in this class.

Inside the Qubo is designed to offer a high level of practicality. The layout of the cabin is simple but attractive and will be familiar to anyone coming from a Grande Punto. The seating position in the front is quite high and upright, while those in the rear row are seated higher still, offering an excellent view out. The high roof means that there is a massive amount of headroom despite the high seating position.

Beyond the rear seats lies a generous load area, accessed through the wide tailgate that opens to a near-horizontal level for easy loading. Although only designed to carry five people, the Qubo has numerous storage areas and the versatility to adapt the load area in order to further increase its carrying capacity.

Our verdict on the Fiat Qubo 1.3 Multijet Dynamic

The Qubo offers a lot for a relatively modest price tag. The level of standard equipment is good, there's plenty of space and the unusual looks are also part of the appeal. The driving experience is easy if not necessarily inspiring, but for the Qubo's intended audience, its simple and honest nature will be enough to win it many fans.

The Qubo should prove to be a very cheap car to purchase and run. Although slightly more expensive to purchase, the diesel version is capable of excellent economy figures, while its very low emissions also means it costs very little in terms of vehicle excise duty, which is good for the environment too.

This is the Qubo's trump card and, although not a large car, it makes good use of its footprint. Front seat occupants have head and legroom in spades and, although in the rear there is less legroom, headroom is also in great supply. The rear load area is also usefully big even with the seats up. Attention has clearly been paid to space efficiency, with numerous pockets and storage spaces throughout the cabin.

The layout of the Qubo is fairly straightforward, with attractive dials with simple white on black markings, and the centre console is also easy to understand on first acquaintance. The comprehensive trip computer takes a little getting used to, but otherwise the features contained within the Qubo can be mastered even by the most hardened technophobe.

For a relatively small car the Qubo is quite a comfortable machine. The ride quality is decent, absorbing a fair amount of road imperfections and although ultimate refinement is hampered by road noise, the Qubo is sufficiently insulated for longer journeys.

The Qubo comes as standard with remote central locking including deadlocks, while an alarm system is available as an option. The load area is also covered by a sturdy parcel shelf which does a good job of hiding any valuable items. The useful MP3 connector is placed between the seats, which does mean it is not possible to lock an MP3 player in the glovebox whilst being connected, which would be more useful.

All Qubos comes with six airbags as standard, as well as ABS with electronic brakeforce distribution. One option that does not appear is ESP, which is an unfortunate omission even on a car at this end of the price scale.

The Qubo is an undemanding car to drive in many respects, with a slick gearbox and light power steering. Visibility is also good which is a useful safety feature and helps the driver in traffic and on the open road. However, whether petrol or diesel powered it's no fireball and lacks useful performance and, as a result, overtaking manoeuvres need to be well planned.

The Qubo is an ideal family vehicle, with the ability to pack a family and their luggage into a small footprint. Isofix child seat anchorages are fitted to both the rear seats, while the view out from the second row would be a hit with children.

The Qubo, although more practical than many first car buyers would need, actually fits the bill quite well. Choose the right exterior colour and it has an interesting appearance, will be cheap to buy and insure and is undemanding to drive. It also has a good specification for a new driver: a good stereo and power steering would appeal to the inexperienced.

The Qubo's quality is quite good, benefiting from its commonality with the Grande Punto and, although it may not look expensive throughout, most of the surfaces that the occupants come in to contact with are more than adequate. The image is shaped largely by its looks, which are unusual and attractive. Fiat's reputation for desirable small cars helps here and the Qubo stands apart from much of the competition thanks to that impressive back catalogue of small cars.

The Qubo's image is shaped largely by its looks, which are unusual and attractive. Fiat's reputation for desirable small cars helps here and the Qubo stands apart from much of the competition thanks to that impressive back catalogue of small cars.

Both Qubo models come with a six-speaker radio CD system with a USB slot also included as standard, allowing an MP3 device to be connected and controlled via the steering wheel buttons, a useful feature on a car at this price.

The Qubo comes in a choice of nine exterior colours, including some vibrant shades. These bolder colours are well suited to the Qubo and highlight its unusual styling. Inside is more conservative, although there are some flashes of the exterior colour on the doors so a well chosen exterior paint provides a boost inside too.

The Qubo is a very easy car to park thanks to the boxy proportions and good visibility. The short overhangs make it easy to judge and, although parking sensors are only optional, it's easy to park without them.

Nissan Note Supermini-based, better to drive though smaller inside