Doblo's upright stance is no barrier to decent driving dynamics 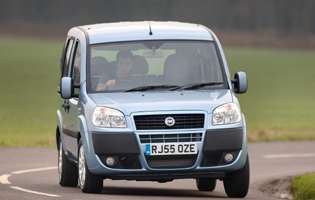 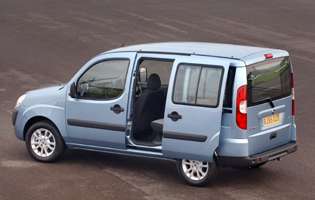 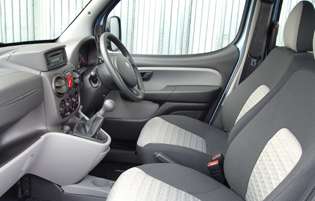 The small but growing number of unashamedly utility biased people carriers provide a welcome distraction from gadget-laden, style over content offerings. Fiat's Doblo is one such vehicle; eschewing a glitzy interior for something functional, the car's screen price reflects its down to earth nature.

There's no escaping the fact that Fiat's Doblo is hardly the most glamorous car on the road. Built for a purpose, its boxy appearance won't win any beauty contests. However, you don't buy a Doblo for its looks, you buy one because of what it can do.

Like Peugeot's Partner Combi and Citroen's Berlingo, the Doblo is essentially a small van that's been converted to take passengers. Positioned at the utility end - read budget - of the compact people carrier market, it's design to fill a gap left by conventional family hatchbacks and more expensive MPVs.

And it's the Doblo's down-to-earth approach to motoring that has already found it many homes. Exposed painted metal in the cabin, sliding rear doors, a vast load space, upright driving position and mobility-friendly cabin access and egress are just some of the high points.

What's equally appealing about the Doblo is its road manners. Far from following the tall MPV stereotype, the boxy Fiat drives more like a car. Granted, it's not going to worry a Ford Focus, but with weighty, direct steering, good brakes, limited roll and a fluid ride, it's a pleasant and enjoyable experience - one that's boosted by the selection of a refined yet willing diesel engines.

Our verdict on the Fiat Doblo 1.3 Multijet Active

When you do the maths, Fiat's Doblo becomes an incredibly attractive proposition. Affordable to both buy and run, the Doblo makes a lot of sense for a growing, active family. Sliding rear doors and a large load space are the highlights. However, the driving experience is a pleasant surprise: car-like, refined and fun, it's at odds with the Doblo's tall, boxy stance and is easily equal to that of a conventional family hatch.

A modest car in every way, the Doblo won't cost much to run. Be careful with the optional extras, choose a diesel engine and metallic paint, and you've got a strong performer that should hold a good portion of its value. Operating costs should be small, thanks in part to the diesel option, the car's simplicity and its modest insurance group rating.

Aside from the Doblo's accommodating front seat space, room in the back is reasonable. Headroom is very good, as is elbowroom, but legroom could be a little better if one adult is sitting behind another tall adult. Offsetting this, the car's sliding rear doors are a huge help, as is the rear load space. Wide and flat, it swallows almost anything, although the Doblo's tailgate is large and needs a hefty pull to shut.

The Doblo is a simple car, and this is reflected in the collection of standard instruments. The main dials are easy to read, while the audio and rotary ventilation controls are placed high up in the centre console. The column stalks are intuitive and chunky-looking, and where fitted the trip computer is comprehensive but not complicated to use.

Clearly biased towards comfort, the Doblo's soft ride is a welcome attribute. The spacious cabin means there's plenty of room for all occupants, although rear legroom could be little better. Engine noise is never intrusive, and wind noise at speed is minimal considering the Doblo's upright profile. The regular seats offer good levels of support, even when cornering hard.

You get remote central locking with the Doblo, and for a low value car that's all you're likely to need. A visual deterrent such as a steering wheel lock would be a low-cost addition. With few storage areas in the cabin and a sturdy rear load space cover, most things can easily be kept out of sight.

Twin front airbags are standard on the Doblo, as is anti-lock brakes and electronic brakeforce distribution (EBD). Mirroring the car's basic approach to motoring, you won't find fancy stability and traction aides on all the different models. You will have to pay extra for side airbags, though.

For a car that's tall and wide, the Doblo drives surprisingly well. The key to decent performance is in selecting a diesel model. Once done, the Doblo boasts plenty of power - more than enough to cope with motorways when fully laden - and soaks up bumps like a regular car. The steering is also a surprise as it is weighty but not too heavy, and returns plenty of feedback and confidence on twisty B-roads. The brakes are progressive and powerful, while the gearshift is slick and visibility is good.

As a budge compact people carrier, the Doblo is a solid performer. The sliding rear seats make it safe for children to access and egress the cabin when the car is parked on a busy street or cramped car park. Space in the back is more than enough for a growing family, while the car's boot will take shopping, weekend activity kit or even bicycles with a little rearranging of the seats. Oddment space could be better though; there are no clever cubbyholes, but there is a useful shelf above the windscreen for maps, sunglasses and other lightweight objects.

There's no reason why the Doblo couldn't be considered as a first car. On its side is affordability and low running costs, plus ease of use. Its size should be no barrier to novice drivers, as you soon get used to the Doblo's larger than usual dimensions.

The Doblo is probably more associated with the private hire and commercial trade than with regular motoring, but its plentiful numbers in those sectors is in itself a ringing endorsement. The Doblo appears to have escaped the poor quality criticisms levelled at other Fiat products, and looking at the car's cabin it's easy to see why. Everything is built to be durable first, but with aesthetics coming a close second.

The slightly raised front seating position in the Doblo helps make access and egress easy. The doors open wide, too, allowing even less able persons to get in or out with a minimum of fuss. The Doblo's sliding rear doors are a great help in tight spaces such as car parks, and make it safer to get out when parked on a busy road. At the rear, the car's large tailgate does need some space to open, and requires a sizeable pull to shut. The load bay is flat and wide, though.

The basic audio unit sits high on the top of the Doblo's fascia. Its location might look a little like an afterthought, but there's no doubt that the unit is easy to operate when on the move. Sound quality is surprisingly good, although some of the buttons can be a little fiddly. You don't get remote controls on the steering wheel, but there is the option of a full colour sat-nav system. Factor in the car's asking price and an aftermarket unit would be better value.

Bright colours help lift the Doblo from utility vehicle to lifestyle vehicle - and make it look less like a taxi. While popular in the private hire world, the Doblo looks ten times better if selected in a bright metallic hue. With a number of areas inside the Doblo left as painted metal, an uplifting colour also boosts the cabin ambience. The plastic trim material might not look terribly expensive, but it does look hardwearing -and that's what counts the most.

The Doblo's straight-up-and-down rear takes a lot of the guesswork out of reversing, as do the rear parking sensors (where fitted). The car's steering doesn't require a lot of effort, which is good considering its size, while in typical van style the door mirrors are a generous size.

Ford Fusion Compact utility vehicle is more like a Fiesta estate. Good to drive but Doblo is roomier

Renault Kangoo Similar to Berlingo, the Kangoo is practical and fun but quality could be better

Peugeot Partner Combi Partner can also be had as a visually more rugged, lifestyle variant