Chunky-looking Duster has been a smash hit for Dacia 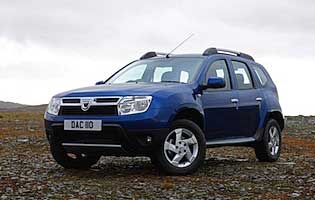 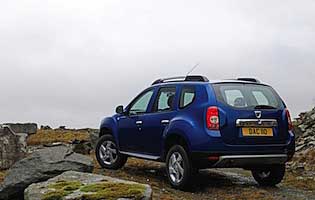 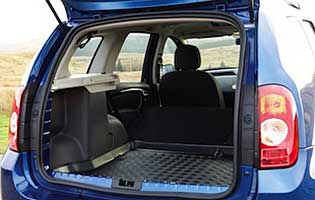 Prior to the launch of the Dacia brand in the UK, Renault's budget brand was largely unknown. This contrasted with the widespread appreciation and popularity for the cars in mainland Europe. Low prices, sturdy construction and simple equipment levels have all helped to boost sales. Nowhere is this more obvious than with the value for money Duster SUV.

With the affordable sports utility market dominating the buying decisions of an increasing number of individuals, it's hardly surprising that Dacia decided to launch its own offering. The Duster promises solid build quality, a modest choice of cheap to run engines, the choice of two and four-wheel drive, ample standard kit and contemporary styling.

Easily undercutting many rivals even when the top-spec car with all the trimmings in selected, the Duster has forced many to reconsider the really important elements of the general buying and ownership experience. The Duster's chunky exterior easily convinces onlookers that the car can deliver where it matters, while Renault's decision to include both two and four-wheel drive options ensures that it will appeal as much to the city dweller as rural inhabitants.

Modest petrol power and gutsy diesel options prove to be competent at everything from urban commutes to long motorway journeys and the occasional bit of off-roading. The Duster's driving dynamics might not be as polished as, say, Ford's Kuga, but the pricing differential ensures that the Duster can still hold its head high in a direct comparison. What's important to note is that Dacia's SUV is a competent, predictable and refined car despite perception its lowly price tag may generate.

For families seeking a robust car with go almost anywhere potential, the Duster presents a tough yet presentable cabin. With most of the switchgear a carry over from Renault, the proven technology on show and under the car's skin should prove reassuring. A practical car with room for five and a capacious boot, the Duster easily trumps a more expensive conventional family hatch for practicality.

It's no surprise to learn that, thanks to its low price, solid construction and able performance, the Duster has proven to be a popular car. Unless you need the extra frills associated with more expensive compact SUVs, the Duster should be at the top of your shopping list. Rugged yet refined, cheap to run but not cheap in appearance, Dacia's SUV deserves all the praise it gets.

For low mileage users there's a lot to be said for a petrol Duster if all you want is a high-rise, bash-proof family hatch. However, if you plan on racking up the miles a diesel variant might prove more cost effective in the long run. Furthermore, if you plan on towing or off-roading the 4x4 models make sense. And given the car's low initial price, adding a few choice cost options is unlikely to break the bank but should add to the car's future residual value.

As a family all-rounder the Duster is hard to beat. Robust cabin materials and plenty of space should see the car capable of accommodating a growing and active family. Cabin oddment storage space could be more generous, but at least the car's boot is a good size. Easy to access and extendable once you fold the rear seats, it should prove sufficient for everything from the weekly shop to the occasional bicycle.

If you have experience of recent generation Renault models, the Duster's cabin will look and feel familiar. The use of existing controls and displays no doubt helps costs down and there's nothing wrong with Renault's switchgear. Thanks to its non-standard controls, the optional audio provision does sit uncomfortably in the Duster's otherwise logical and fuss-free fascia.

Firm and supportive seats great all cabin occupants, although due to the Duster's height the front seats can't quite keep you in place during spirited cornering. There's enough room for all passengers, with ample head and legroom even in the back. On the move the Duster is reasonably quiet, although both petrol and diesel engines can sound harsh when pushed hard.

Remote locking is present but over and above the basic anti-theft system there's little to report here. Thankfully the car's load cover is a sturdy item, which will do much to deter prying eyes. A visible deterrent such as a steering lock might add some peace of mind but it's more important to ensure items in the cabin are out of sight to avoid any temptation.

Don't expect a cabin full of airbags and the latest technology, as the Dacia's modest approach extends to the car's safety provision. Don't worry you do get the basics, but it would be foolish to expect more at this price point. Obviously, if you opt for an all-wheel drive model there's the added security of extra grip.

In petrol guise the Duster offers a relatively refined and brisk driving experience. It's only when pushed hard does the motor highlight the effort required to haul along what is a moderately large car. Diesel is preferred for more arduous tasks and you also benefit from a more relaxed pace at motorway speeds. In every other respect the Duster delivers a composed ride with accurate steering and a slick manual gearshift. The all-wheel drive option is a genuinely useful addition if you need the added security when on rough ground or when towing.

Whether you choose it for the school run for more arduous activities, the Duster is unlikely to disappoint. The car's durable but easy on the eye interior should ensure that the occasional knock is taken in its stride. More importantly, there's ample space for a growing family, while the boot is big enough to swallow all manner of family belongings. And if you're an active type, all-wheel drive will help to places you wouldn't ordinarily be able to reach.

With its easygoing character there's no reason why a Duster couldn't be considered as a first car. It's not small, but the lofty driving position should compensate and offer drivers plenty of forward visibility. Furthermore, it's a relatively low cost purchase, which should help if funds are tight.

At launch in other European markets cost-conscious buyers enthusiastically embraced the Duster. Simply put, the car made medium size SUV motoring affordable. The Dacia brand has also enjoyed considerable success and earned a huge amount of respect for making low cost cars without the traditional compromises, such as including below par powertrains or cabin materials.

The Duster is a genuine 4x4, which means you do need to climb up into the cabin. As such, this might pose a problem for less than agile passengers. In every other respect the Duster behaves like an outsize family hatchback - the doors open nice and wide while the tailgate requires little effort to open or close. Due to the elevated ride height you might need to stretch to reach the furthest corners of the boot, though.

Where supplied, the standard audio unit offers the basic functions in a simple to use format, such as radio and CD. Cost options run to Bluetooth and DAB, although the aftermarket alterative isn't as easy to use thanks to its fiddly controls and small display.

Both light and dark exterior colours work well, with even the upmarket metallic options doing much to enhance the Duster's looks. Inside it's standard dark grey for most of the cabin, with the emphasis more on durability than luxury.

You sit high up in the Duster, which makes the act of parking a relatively straightforward affair. With its good all-round visibility plus the straight-down design of the tailgate, it's easy to place the car even in the tightest of spaces. Factor in plenty of assistance from the steering and the Duster hides its size well.