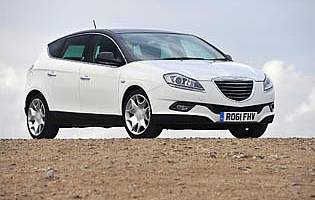 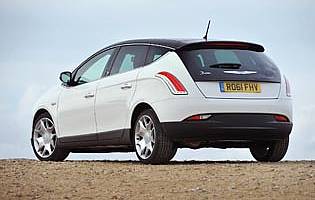 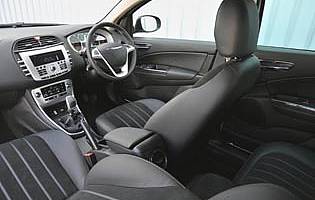 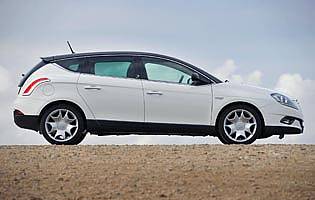 If you think you've seen this car already while traveling through Europe, you have. It might be new-for-2011 for the UK but, as a Lancia, the Delta has been a common sight on the continent. So why the Chrysler badge? The American firm, now owned by Fiat (who also owns Lancia) wanted a shortcut into the burgeoning family hatch market. And with Lancia having long since exited the UK, the Chrysler brand was thought to be the easiest one to communicate to prospective buyers.

At its launch Chrysler proudly claimed that the Delta would offer an elevated sense of luxury that's missing from its immediate rivals. Distinctive exterior styling aside, the Delta's plush interior and general upmarket advertising campaigns and cabin ambience was hoped to be key in securing interest.

To be fair to Chrysler, it pulled out all the stops and positioned the car accordingly regarding its price. Look closely, though, and the Delta's cabin boasts the same quality of materials as many of its 'lesser' rivals. It's a tough market, which is why focusing on branding and aspirational values has become so important.

There's no shortage of equipment available to make the Delta experience a plush one - even if you have to delve into the options catalogue. Aside from the six airbags and audio unit with MP3 compatibility, the further up the model range you go you can expect to see leather trim, alloy wheels, climate control, driver and passenger seat lumbar adjustment and satellite navigation.

Along with the new car comes a brace of cleaner, more economical and reasonably powerful petrol and diesel engines. Parent company Fiat has been making great strides in recent years with turbo petrol and diesel technology. The result is an engine line-up offering a good mix of performance and modest running costs from the smallest 1.4 petrol to the flasghip 2.0 diesel units.

Its underpinnings hale from the Fiat group but, for the UK at least, it wears a Chrysler badge. The Delta is an unusual proposition; supported by a small dealer network and positioned as a premium family hatchback it's not the cheapest around or the best allrounder. Its cabin is spacious though, its looks distinctive. If you're looking for something different it's definitely worth considering.

Chrysler makes no apologies for the price positioning of the Delta. Keen to pitch the car at the higher end of the hatchback sector, at least equipment levels rise accordingly to match the various asking prices. As for running costs, clever engine selection is the key factor. Predictably, high mileage users will be drawn to the efficient diesels. Low mileage owners will likely fare better with small capacity petrol unit.

A solid performer, the Delta's cabin easily accommodates four adults in relative comfort as there's a good level of legroom, while dotted around the cabin are a selection of useful storage spaces. The Delta's boot is deep and wide, and the rear seats easily fold down to liberate some welcome extra space.

The Delta's fascia is subtly but obviously driver-focussed. The major controls are angled slightly in his or her favour, and the overall effect is a pleasant one. The styling bias is towards a sporty image, as can be seen from the design of the main dials. That said, the ergonomics of some of the minor controls could be a little better. The car's trip computer is comprehensive but fiddly to operate and the optional Blue and Me interface isn't terribly intuitive.

From inside the cabin, the overall feeling is one of refinement. Plush, supportive seats certainly help matters, while road noise is modest at normal speeds. Noise from the high power diesel unit can be heard when accelerating hard, and the car's ride can feel unsettled when traversing poorly surfaced roads at speed.

Remote central locking comes as standard on the Delta, along with the all-important immobiliser. In reality this is all you'll need, as the car's sturdy rear load cover does a good job of protecting the contents of the boot.

As you'd expect, the Delta is well equipped. There's no shortage of airbags, plus there's ABS, EBD and ESP to fall back on if it all goes wrong on the road.

Chrysler is keen to promote the Delta as a luxury hatchback, and acknowledges that it is more of a brisk cruiser than ken driver's car. Foremost, the car's steering boasts considerable assistance, which is a boon around town but won't please the enthusiastic driver. However, driven briskly and within its limits, the Delta is an agreeable car. Noise levels are low, while the low down flexibility of the car's turbo petrol engines is impressive. The Multijet diesels, as when fitted to other cars, prove frugal and powerful in equal measure.

In a world populated by people carriers of all shapes and sizes, the Delta offers some welcome relief. It's roomy enough to accommodate a growing family, and there are plenty of storage spaces plus a decent size boot. The cabin decor is all high grade stuff, which means small children might not be welcome with their sticky hands and muddy feet.

There's a lot to be said for the Delta in this context. It's certainly an easy car to drive, and it's not too big so as to deter the novice driver. Performance-wise the car has potential, but the lower order variants deliver enough of everything to make them attractive and, crucially affordable. The only snag is price, as the car isn't the cheapest in its class for a novice owner.

Aside from Chrysler's people carriers and large cars, this is new territory for the brand. For many, the Delta's existence elsewhere as a Lancia product won't know, making it a clean sheet project. As a low volume alternative to the likes of Ford's popular Focus, the Delta appeals because it's different. Whether that's enough to maintain interest will have to be seen.

Front seat occupants should have no trouble accessing the Delta's cabin. The seats are slightly elevated, making access and egress straightforward. Rear seat occupants won't feel compromised in terms of leg or headroom thanks to an above average amount of space. At the back, the car's tailgate lifts easily to reveal a deep boot.

The standard fit radio and combined single CD player works well, with sound quality at a good level. Usability is also good, while the steering wheel controls are convenient but model dependent. The Fiat Group's ' Blue and Me' system allows a Bluetooth connection to a mobile phones for true handsfree calling plus voice commands for simple functions but could be more intuitive. The provided USB socket allows users to connect a USB memory stick for the playing of MP3 music files.

Bright, bold colours have been an alien concept for Chrysler vehicles but this model carries them off well. It's possible to combine contrasting interior and exterior colours, although the safest bet remains a dark cabin to maintain that premium ambience.

The Delta's light controls - steering, throttle, gearshift - all help to make parking easy. Forward visibility is good and the car comes with generously dimensioned side mirrors. The view rearwards is obscured slightly due to the three rear headrests and thick rear pillars. The rear parking sensors are a useful addition.

Volkswagen Golf Upmarket alternative is comfortable and refined. Could be more engaging for the driver, though