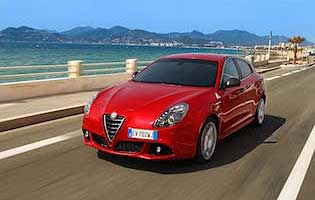 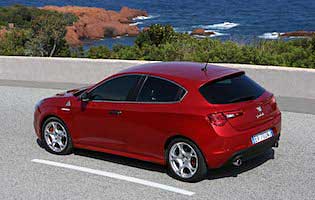 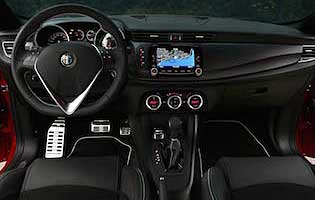 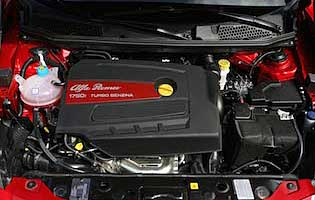 Following the modest revamp of Alfa's smallest hatch, the Mito, the Italian firm has decided to add a high performance variant. The Quadrifoglio Verde, or QV for short, evokes memories of past performance models.

168 horsepower might not seem like a lot these days, but in the 'warm' hatch market the Mito's output proves ample. The generally high specification is also welcome, although the tradeoff is an asking price at the top end of its market sector.

In the real world the Mito QV acquits itself well, with its 1.4-litre turbo petrol motor proving to be a willing and flexible companion. There's a sense that more communication from the steering, pedals and chassis would be beneficial if you want to push that little but more, however. The upside is a car that's unlikely to bite back, wile delivering good levels of everyday refinement.

If the car's performance doesn't quite match that of more focused models from the likes of Ford and Renault, the Mito QV's cabin exudes Italian charm. Being the range-topper it benefits from QV-specific trim plus a generally high level of standard kit.

If you're after a honed and focused performance compact hatchback, the Alfa Mito QV probably isn't for you. If absolute driving pleasure is your goal, there are sharper, more responsive cars available. As a package - looks, heritage, brand image, accessible performance - the Mito QV is a more rounded proposition than you might first think. It's still a choice strictly for the dedicated Alfisti, though.

You migt expect the small capacity turbo engine in the Mito QV to be especially frugal, but even when driven only briskly don't expect to trump a diesel family hatch. In truth, the QV is a niche car and, hopefully, buyers will understand this and moderate their expectations. At least QV spec is more generous than for the rest of the range.

The boot has ample room for everyday luggage-carrying tasks and is similarly-sized to competitors but the high load lip can prove an issue. In the cabin, oddment storage space is ample for small items while there's plenty of room for two adults up front.

Alfa has changed the main instrument cluster for the 2014 model, making it less cluttered and more stylish. The highlight is the five-inch touch-screen, made by TomTom, integrating both the sat-nav and the media interface. It's a decent effort, and highlights the shortcomings of Alfa's old-style clunky trip computer.

As you would expect, the front is the better place to be, with plenty of space and comfortable, supportive seats. The rear seats offer only modest legroom. Also, a combination of the lack of rear doors and the thick C-pillars means that adult rear seat passengers are likely to feel quite cramped.

Remote central locking with deadlocks par for the course here, along with an alarm and a code immobilizer, which are also standard-fit.

All Mito model grades get seven airbags spread throughout the cabin, which should be plenty for a car of this size. A full spread of stability, traction and skid control technologies are also present, which in addition to their normal functions are also linked to the DNA drivetrain mode selector switch.

Recent Alfa performance models haven't quite hit the mark when up against the competition. This Mito QV gets closer - it's rapid, looks good, comes with all the right kit - but push it hard and it can come unstuck. The firm ride is fine on good quality roads but the TCT transmission can prove slow to respond. It's not as rounded as some rivals but it's certainly rapid.

As a second car the Mito is a stylish, compact option that will let families ferry their young children around, but the lack of rear doors does make access more difficult. Factor in a boot that's deeper than it is long, and you might struggle to find sufficient space for large, bulky items.

In non-QV guise the Mito is a decent choice if you're after something stylish. However, this performance variant will likely cost more to run and insure thanks to its more potent character.

Alfa Romeo positions this car as a premium performance hatch, competing for sales with more established sports hatches from the likes of Ford, Renault and Mini. Alfa has expended considerable effort in resurrecting its racing heritage in a bid to bolster the QV's credentials.

The car's longer doors mean that in tight bay parking spaces it can sometimes be difficult to open the doors wide enough to allow entry. Also, the car's boot might be deep but a high loading lip hampers access.

The new touch-screen interface borrows technology from TomTom, but the media interface is Alfa Romeo's. It acquits itself well and tech-savvy buyers should engage with it more enthusiastically than with pas offerings.

The Mito QV delivers with a modest range from business-like black to the traditional Alfa red. Bright colours are the best option if you want to highlight the car's looks. On the inside, there's plenty of QV-centric detailing, from the fabric stitching and plush seats.

Although a small car, rear visibility is restricted and plenty of drivers will be grateful for the rear parking sensors. Bay parking is hampered a small amount on this model because of its wide-opening doors - a hazard of three-door hatch ownership.

Ford Fiesta Great to drive and affordable with widespread appeal