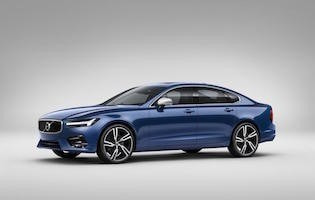 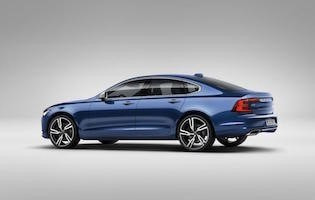 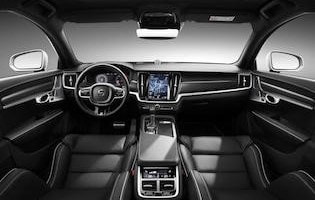 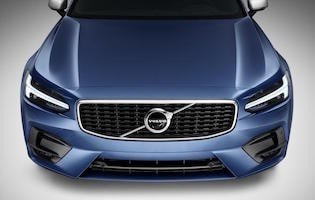 In the executive saloon market, German manufacturers such as Audi, BMW and Mercedes-Benz are dominant. But the Volvo S90 offers a delightfully Scandinavian alternative to these established but predictable top sellers.

The R-Design model has been introduced to give the S90 a sportier edge in handling and style if not in performance. Key upgrades to the exterior include a gloss black grille, fog lights integrated into the front bumper and 21-inch alloy wheels.

Under the skin, the suspension has been tightened up, the ride height has been lowered and the steering retuned to give a sportier feel. The latter is a major disappointment though, as it's too light and offers absolutely no feedback.

We're driving the D5 model, which comes with a 232bhp 2.0-litre, four-cylinder diesel engine that powers all four wheels. It's an economical unit, but it's starting to feel a little rough and old-fashioned compared to more refined rivals.

While the driving experience is mildly disappointing, the interior is where the Volvo excels. The R-Design gets upgraded seats and bespoke trim with plush leather touches, and it all adds up to a far more interesting and comfortable interior than most rivals. The tablet-like infotainment system is a joy to use too.

Our verdict on the Volvo S90 R-Design D5

While the R-Design has been brought in to offer something a little sportier in the S90 range, it falls somewhat short of the mark in this regard. The recently updated BMW 5 Series and Mercedes-Benz E Class are much better from a driver's viewpoint.

However, a well-designed interior and classy looks make the S90 R-Design a viable alternative to the established names.

The 2.0-litre diesel engine returns impressive fuel economy of more than 50mpg without really trying – official figures put it at 58.9mpg on the combined cycle. It's fairly average for the segment in terms of insurance though, with the BMW 5 Series and Mercedes E Class sitting slightly higher in the groupings, while the Jaguar XF will cost slightly less.

While the interior might feel a little claustrophobic to some taller passengers, there's no denying Volvo has put practicality first. The glovebox is big and there are cubby holes in the centre console and doors, while a car-full of adults could travel long distances without feeling too cramped.

Boot space is far from best in class, but with 500 litres of luggage space available few could have grumbles.

The Sensus infotainment system is a highlight as it's so quick and easy to use. There are still a few traditional buttons on the dashboard, but most functions are moved to the touchscreen. This is normally an issue, but it doesn't take long to get to grips with the Volvo unit.

The leather seats in the S90 R-Design are supremely comfortable, and generally speaking the interior will leave you feeling relaxed. The infotainment system works well and all of the heating functions work with little fuss.

However, that ride quality comes back to haunt you on rougher roads, as the sensation of luxurious comfort is rattled somewhat on anything other than glass-smooth roads.

The S90 R-Design comes with all the security systems you'd expect from the executive saloon segment, such as automatic locks and a Thatcham-approved alarm.

Volvo has made a name for itself in its commitment to safety, and the S90 R-Design is no different. The S90 gets the full five-star rating from Euro NCAP, recording 95 per cent for adult occupants.

It also gets the latest City Safety system as standard, which includes emergency braking as well as inter-car communication, allowing your car to communicate with others to warn of hazards.

The R-Design has been designed with keen drivers in mind, but the best S90 driving experience comes from lesser trims. The sportier suspension makes the ride much stiffer and less composed, which is something standard trims do really well.

The steering is also much too light making chucking the S90 into a corner something of a guessing game, while the automatic transmission is a little sluggish so there’s no powering out on the other side, either.

The S90 will be mighty appealing to families thanks to its spacious interior and impressive luggage space. Youngsters will have plenty of room in the back, while the large glovebox and cubby holes up front will mean storing items for quick access is easy.

If you're looking purely at safety and running costs, the Volvo S90 feels like a great option for a first car. However, size-wise it'll be extremely intimidating to those who've just passed their test, while a high insurance group could make covering the car prohibitively expensive.

Volvo has pitched itself more upmarket over the last few years, but the badge appeal isn't quite there yet. If keeping up with the Joneses isn't as important as simply buying a quality product then the S90 makes great sense. The interior feels as well put together as any German rival, but with more character, while the classy styling of the exterior means it fits in next to the likes of Mercedes and BMW in any car park.

Particularly in R-Design trim, there is a bit of a drop into the seats, while the almost coupe-like body shape means that the door apertures are a little smaller than some rivals offer. However, the doors open wide to make it easier to get in and out.

For £575, the keyless drive package comes with hands-free boot opening – just wave your foot under the rear bumper and the boot open, making it easier to transfer a lot of luggage.

Volvo worked hard on its Sensus infotainment system, and it's paid off because it's so easy to use. Treat it like a tablet and you'll quickly get the hang of menus as you tap and swipe your way around the various screens – it's so responsive that at first you habitually wait for the screen to load only to realise it's already there.

Audiophiles will truly appreciate the Bowers & Wilkins stereo, but as part of a £3,000 package it’s really only for dedicated music fans – the standard setup will suffice for most.

As you'd expect from the executive market, there are many dark, subtle colours available. There's a white and black, with four shades of grey in between. Our test car came in the Bursting Blue premium metallic hue, which is a £1,000 option – well worth the outlay, though, as it's a lovely colour that shows off the S90's styling well.

Due to the sheer size of the S90, parking in tight spaces can be tricky, particularly as the rear column is quite thick and the rear window is slim. However, parking sensors and a reversing camera help to ease matters somewhat, though they're optional extras at £325 and £400 respectively, which is a shame.