C30 presents a more youthful face to the world 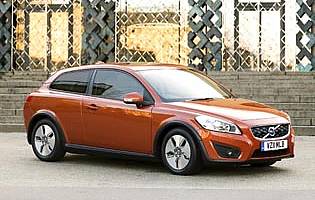 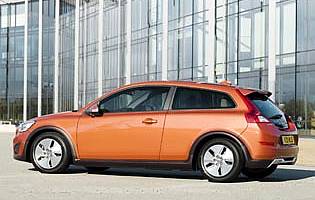 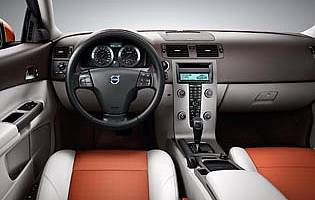 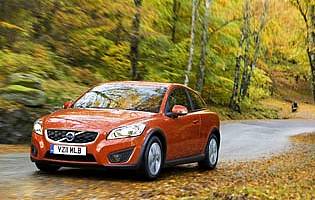 As a way of competing with other firms offering low CO2 and highly fuel efficient cars, Volvo has tasked its 'Drive' sub-brand to carry the green flag.Its C30 is its most accessible model and apopular with UK buyers.

The C30 is hard to pigeonhole; it's car that's unlikely to appeal to the masses keen on a family-friendly five-door hatch, while its looks are a world apart from the traditional, boxy Volvo look. It does offer a trendy alternative to a conventional supermini, though.

The Volvo experience of years past was a conservative one. This time it's different; partly because the C30 shares its underpinnings with the critically acclaimed Ford Focus, and because this Volvo is aimed squarely at younger buyers.

Volvo's entry level green 'Drive' model is more likely to secure the youth vote than the firm's more conservative S80 saloon. Volvo has always been into subtle messages but the up-fron styling abilities of the C3 have done much to accelerate its appeal.

In essence this C30 saves you money at the pump and helps make the world a better place through the use of lower rolling resistance tyres, the clever tweaking of the car's aerodynamics and detailed changes to its engine and gearbox - more efficient running and longer gearing respectively. The end result from this 1.6-litre diesel C30 is a pleasant surprise, and without the usual eco car compromises.

The car's eco element works well and doesn't compromise the driving experience. What it doesn do, however, is introduce some welcome savings on a day-to-day basis. The recent facelift helps to boost the car's appeal and adds a youthful angle that's often missing from Volvo's products

In Drive form the car is surprisingly economical and also boasts a congestiono charge-busting CO2 rating which should please urban motorists. Granted, to make the diesel option pay it makes more sense if you travel a lot miles. In this context this C30 also scores highly; it's big car refinement and helps offset its small dimensions. Standard equipment levels are reasonable but there are many tempting options available. Thankfully some are grouped into bundles to make them more financially attractive.

It's worth pointing out that the C30 is no family hatchback.More of an two-plus-two in the same vein as a roadster or sports car, the C30 is better suited to singletons, couples and empty nesters if you believe Volvo's marketing material. As such, the C30's boot is also modest but the rear seats can be folded forward. There's more space up front - both for occupants and oddments. The car's door pockets are rather small, which is a Volvo quirk.

Volvo prides itself on its policy of clear and easy to read and use instruments and controls. There's no question that the C30's main dials are just that - even at night. The car's chunky column stalks are also straightforward. The central fascia is less intuitive, though. The mobile phone-inspired design might look good but takes a while to understand. The audio unit's LCD display could be of a higher resolution, too.

Volvo, like its fellow Swedish car maker Saab, is famed for the quality of its seats, and the C30 isn't a car that will have you longing for a break on a long journey. The cabin is also spacious enough to ensure two adults never feel cramped, although those in the back will have to be more forgiving as leg room is at a premium thanks to the car's compact dimensions.

To many the C30 doesn't look like an expensive car but Volvo done the decent thing and has chosen to equip it with an alarm and immobiliser - it's still a distinctive sight, though. You also get remote central locking as a matter of course,and there's the option of a fully 'keyless go' system. Both a convenient and security-minded feature, so long as the key is on your person you can simply walk up to the car, get in and start it, eliminating the need to fumble with keys in the dark.

As you would expect, one area where the C30 scores well is in the safety department. Numerous airbags are deployed around the cabin, as is Volvo's own dynamic stability control. It might not be a powerful car but the Drive variant's torquey diesel can still provoke wheelspin in the wet, although the electronic systems are smart enough to allow some slip so you're not left stranded in the middle of an uphill junction for example.

In eco-minded Drive form, surprising the little Volvo shares the same enthusiasm for the road as the other C30s. Ride quality and dynamics are impressive, while the 1.6-litre diesel engine is refined, smooth and willing in all circumstances.Road and tyre noise is minimal at all speeds, while the car can be hustled along at a brisk pace if you desire.The steering lacks some feeling but this is the only drawback in what is a rounded driving experience.

As a second car the C30 won't disgrace itself, although you'll appreciate why it falls short as a regular family car when you go to belt a child into one of the rear seats - access could be better. The car's small boot is another issue, making Volvo's S40 or V50 a better choice if you plan on carrying a lot of kit to keep your family moving.

The C30 is an easy car to drive and, ignoring the flagship performance model, is unlikely to prove too powerful. Realistically the eco-minded variant should be a perfect fit both in terms of performance and running costs. Only the modest rear visibility could tax a novice when parking.

Volvo's traditional safety conscious image remains intact with the C30. It's a car that maintains the firm's solid track record, and is something many buyers still hold dear about the brand. Quality is a non issue here - the car is well built and feels like it will last a lifetime. The car's slightly quirky styling also sets it apart visually from its main rivals.

Three-door cars can sometimes be a compromise; there's always the issue with opening doors in tight spaces - no three-door car is immune to this. The upside is easy access to the cabin for front seat occupants. You do sacrifice practicality for style at the rear, however. The car's small tailgate requires little effort to operate, but there is a small load lip to content with.

The standard fit audio unit is a built-in type, which makes it less attractive to thieves. The display is a conventional LCD, which can make it hard to read sometimes. The various buttons might look smart but they can sometimes make navigating the unit's features a little slow.

Volvo's C30 is not styled like other compact hatches, and as such pretty much any colour suits the car; bold, bright or subdued. The absence of any chrome helps add a youthful slant. The bold interior maintains Volvo's trademark sombre tone despite the inclusion of a few choice trim highlights.