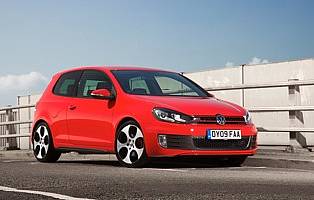 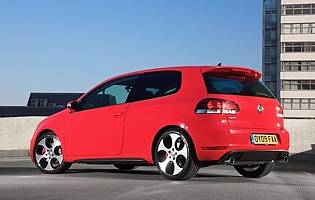 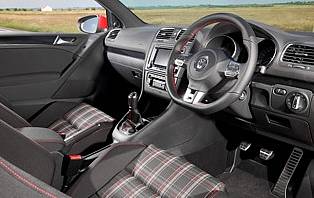 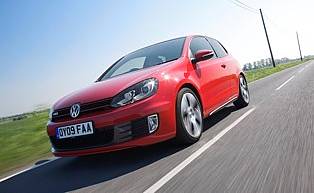 A mainstay of the Golf range, the GTI has been around for many years. Volkswagen's hot hatch has evolved over time; once it was a gritty, basic experience but now it's more civilised and luxurious. It's still able to perform on the road, though.

Truth be told this sixth generation car is more of an evolution than revolutionary step forward over the fifth generation car. That said, there's nothing wrong with Volkswagen's approach - thousands of happy buyers can't be wrong.

The Golf's sharper-looking exterior is matched by an interior with a noticeably more premium look and feel to it. There's no doubt that it surpasses anything else in he same sector and actually battles of attention with cars costing twice as much.

But what everyone wants to know is whether GTI number six is better than number five. The simple answer is yes, and it's not just because of the car's posh interior. Outright power might not have risen exponentially but the small hike serves as a reminder to the presence of a new direct injection petrol engine. This smooth 2.0-litre turbo motor is punchy when it matters, and cleverly balances performance with real world frugality.

And the Golf GTI is as polished on the road as its premium aura suggests. For many, this will be their only car, so it's no goo having something that will loosen fillings. The Golf demonstrates a mature, fluid ride, but one that's almost roll-free when you're pressing on. The included trick electronically controlled differential helps, as does the optional (but worth it) electronic damper control.

Our verdict on the Volkswagen Golf GTI 2.0 TSI 3dr

Although lacking the sparkle and near 300-odd horsepower of some rivals, Volkswagen's Golf GTI is more of an expert all-rounder than one-trick wonder. Relaxing on the daily commute, the potential to take the car by the scruff of its neck is still present. The result is a thoroughly impressive and rewarding performance car, and one that's refined, practical and well equipped to boot.

Although the car's asking price has crept up in recent years, the Golf GTI still offers good value for money. The balance of performance, refinement and practicality is hard to beat in the hot hatch sector. And the popular petrol option is surprisingly economical despite its potential.

Steadily growing in size in recent generations, the Golf is now a large hatchback and one that will easily accommodate a growing family - even adults in the back. The car's boot is also a good size, the rear seats fold forward and there are enough places in the cabin to store oddments such as mobile phones, drinks and maps.

Clear and bright displays coupled with intuitive controls make navigating your way around the Golf's cabin easy. Located logically around the fascia, every control feels solid and precise. The optional sat-nav display is very easy to use, while the manual gearshift is slick and accurate.

Less hard-core than most rivals, the Golf GTI delivers a pleasing blend of refinement and comfort despite the car's performance potential. Road and engine noise is low, while cabin space is generous and the overall build quality is high.

For all the GTI's potential, unlike some rivals it doesn't look particularly fast. From a security perspective this is a good thing. With its subdued looks the Golf is unlikely to attract the wrong sort of attention. And if it does, there's an alarm and immobiliser combo to help protect your pride and joy.

As befits a modern Volkswagen, there's no shortage of safety kit present. Twin front and side airbags plus a suite of electronic stability controls are all there for more than just peace of mind. As for the ken drivers, the ESP is rarely obtrusive and can also be switched off.

It's not the fastest or most powerful hot hatch out there but the Golf GTI is possibly the more rounded choice. A torquey, willing engine, composed handling and an engaging character make the Golf easy to live with and fun to drive in equal measure. Fuel economy is decent given the car's potential and refinement on long journeys is well above average.

In five-door form the Golf GTI is an ideal family car, assuming you're not a fan of the more versatile compact people carrier. Space is unlikely to be an issue in the cabin or the boot. The three-door car makes life a little harder, what with the restricted access to the rear - possibly an issue when belting in a small child.

In principle the Golf is a good fist car candidate. The GTI is less so for the obvious reasons: high performance, more expensive insurance. There's little doubt that the Golf is an easy car to drive, but the GTI's ability to cover ground rapidly might be overkill for the novice.

Displaying a level of quality well above its rivals, the Golf - any sixth-gen Golf - is much more than your average medium-size hatchback. And buyers know this, which is why the car remains a popular and sought after purchase.

Staying true to the traditional hot hatch form, the three-door GTI is the one to have. It's also the one offering the greatest level of cabin access thanks its wide-opening doors. The flipside is that parking close to other cars isn't recommended - those doors require a fair amount of space. At the rear the car's tailgate requires little effort to open wide above the bumper line.

The high mounted audio unit is easy to view and operate on the move. The standard unit is perfectly serviceable, although tempting upgrades include a touch screen sat-nav and combined audio player. Bluetooth phone connection and MP3/iPod inputs are also present. It all works well and the iPod input mirrors the device's track listing on a bigger screen.

Bold exterior colours suit the Golf GTI the best. Possibly the least fussy in terms of design, keeping it simple is the smartest option. Inside, as befits a VW Group car the cabin ambience is somber, although the retro checker design upholstery is a welcome addition.

The combination of the slightly raised driving position, easy to modulate throttle, large side mirrors and steering with an abundance of assistance make parking straightforward. Where fitted, parking sensors take the guesswork out of reversing.

Ford Focus ST is good all-rounder from the Blue Oval