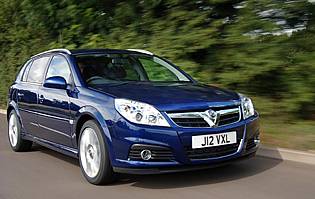 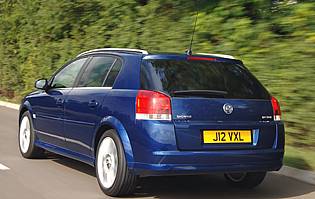 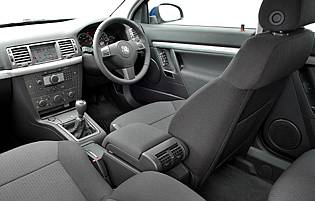 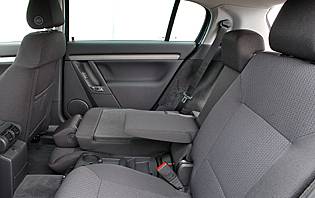 Neither an estate car nor a conventional family car, Vauxhall's Signum is something that is difficult to position in the market. What you do get is a five-door hatch that's big on passenger space and refinement at the expense of the versatility of a true load lugger.

You can be forgiven for not seeing too many of Vauxhall's Signums on the road. Unlike the firm's Vectra, the Signum's role in life is less clearly defined. It's not the obvious choice for the rep with a fondness for Vauxhall's, which probably explains the car's rare status.

The key to understanding the Signum is to look past its exterior. The car's cod-estate silhouette is misleading - it's no load lugger in the conventional sense. Access to the rear is better than the Vectra's though, which puts it one rung higher in the lifestyle category.

Consider the Signum as a five-door alternative to family-orientated compact people carriers and the car starts to make sense - if your family is of the grown up variety. Realistically a four-seater, the Signum easily accommodates a pair of stereotypical lanky teenagers in the back, mum and dad up front and either the weekly shop or holiday gear in the boot.

Factor in the car's 2005 model year updates - new nose, cabin and ride improvements - and the Signum starts to look attractive, albeit in a niche market way. That is, until you see the asking prices. With the high spec cars not far off that of a basic Audi or BWM, it's easy to understand why people continue to remain badge loyal.

Our verdict on the Vauxhall Signum Elite 3.0 CDTI 24v

The sales numbers and residual value calculations prove that the world isn't yet ready for a premium Vauxhall-badged hatchback. The car itself is a good one, and especially so in post-revision guise. However, for all the extra cabin room and kit the car offers, it's no A4 Avant or 3 Series Touring in the eyes of the brand obsessed, which is a shame as the Signum is possibly the more satisfying to live with long term.

The up-spec Signum is not a cheap car by Vauxhall standards, but look at the generous list of equipment and the asking price is easier to swallow. Pick a middle order diesel and fuel bills will be pleasingly low, while servicing costs shouldn't cause you to lose your shirt. The car's unusual status in the Vauxhall range means the trade find it difficult to classify and used prices tend to reflect that - great if you're buying but not if you're selling.

The Signum falls between a Vectra hatch and Vectra estate - the car's boot is a reasonable size, but it's no match for that of a true load lugger despite the Signum's appearance. The car's interior is a different matter. Space missing in the boot is present in the rear of the cabin, making the Signum a spacious tourer for four adults. The usual family car cubbyholes are present, and the storage space available in the centre console and rear armrest is better than average.

Owners and fans of the Vectra will be right at home in the Signum - the cabin architecture and control layout is the same. The car's main dials are easy to read, the central display mounted high in the fascia is informative but never cluttered, and the ventilation dials are reassuringly intuitive. The car's 'one touch' indicator and wiper stalks initially require a little thought but soon prove straightforward. In manual guise the gearlever's throw is not too long and the extra steering wheel buttons work well and control more than just the car's audio unit.

The Vectra and Signum range have always been biased towards comfort, and the latter still delivers a predominately comfort-orientated experience despite the driver-focused improvements. Ride comfort is good; urban imperfections are easily dealt with and cruising at motorway speeds is effortless. Engine and road noise has been kept to a pleasing minimum, and occupants are unlikely to complain about the amount of room in the cabin. The Signum boasts more rear legroom than a Vectra, which makes it ideal for a grown up family or corporate duties. Both front and rear seats are supportive.

All the basics are covered in the Signum, but that's about it. Remote central locking is standard, and this is supplemented by an immobiliser and alarm - the latter's not included on the entry level Exclusiv. Given the car's relative lack of status, it's unlikely that it will attract that much attention.

Vauxhall, like Renault, has focused increasingly on safety in recent years. Apart from the obvious air bag provision, which runs to twin front, side and curtain, there are numerous electronic aids to help keep you out of trouble. That said, if you want full-blown stability control, you'll need to select the Design or Elite variants.

Vauxhall engineers put a lot of effort in to improving the Signum's ride and handling - and it shows. A sharper, more responsive car is the result, with this behaviour supported by a good range of engines. Predictably the diesel units provide the most real world performance, and the flagship 3.0-litre V6 engine delivering an impressive yet refined punch.

As an upmarket alternative to a conventional, compact people carrier, the Signum scores highly if you're seeking a little more luxury and driving enjoyment. Rear legroom is considerably improved over the Vectra and the Signum's boot is as accessible as that of an estate car, although the available space is somewhere between that of a load lugger and regular hatch. Realistically the car is a four seater, as the rear compartment boasts a sizeable multi-function armrest and there's the option of a removable centre storage box, making it more appropriate for a grown up family.

It's unlikely that any novice would actively choose a Signum. If you're young at heart, the mature Signum probably won't appeal even if you could afford one. However, if you find yourself driving one there's no need to feel alarmed as it's easy to steer and park.

At launch the Signum suffered a little because many critics found it difficult to pigeonhole the car. Was it a hatch or a compact estate? In truth it is a roomy hatch with a decent boot, which puts it at odds with the Vectra yet the Signum costs considerably more. With fewer Signums on the road than Vectras, this could prove appealing to some buyers, though. Build quality is good and a noticeable improvement over the original launch cars.

Based on the Vectra estate, it's no surprise to learn that the Signum boasts a generously proportioned cabin. This translates into good levels of access all round, although the car's front doors do open wider than those at the rear. However, once inside, rear seat occupants are presented with a generous amount of legroom. At the back the car's tailgate requires a little effort to raise and lower, but the load lip is both wide and low.

The Signum follows the humble Vectra in this department, with the lead-in Exclusiv boasting a CD player and radio that outputs its information to the car's main fascia-mounted display. Digital Audio Broadcast (DAB) is also featured in the line-up, while the full colour sat-nav option is both intuitive and quick to recalculate a route. Best of all, the steering wheel mounted controls mean you rarely have to take your hands off the wheel.

Selecting a dark exterior colour - preferably black - lends the Signum a higher level of kerb appeal over its Vectra cousin. If nothing else, the car looks more like the executive car Vauxhall would like you to believe it is. Inside, the cabin doesn't quite follow the plot. The interior is almost identical to that of the Vectra's, although build quality and the type of materials used is up to a high standard. Leather is recommended if you want to feel the full luxury effect.

The view forward is more than adequate for when parking the Signum, and the steering offers a high level of assistance to make the job easy. The car's mirrors also make parking easy, although the dark privacy glass fitted to the rear windows doesn't always help when manoeuvring in dimly lit car parks. That aside, the Signum's near-vertical rear hatch makes judging distances straightforward. Parking sensors are worth it to make the task even easier, though.

Peugeot 407 SW Although more conventional, 407 puts more emphasis on style than its rivals

Subaru Forester Another unconventional five-door hatch, but more rough and ready than the Signum