A powerful but discreet stance is part of the charm 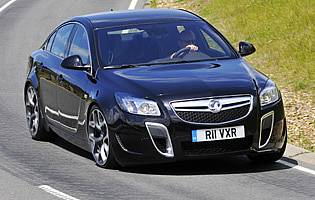 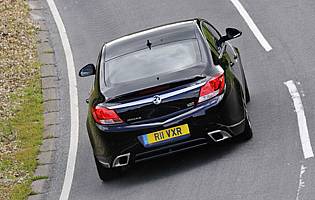 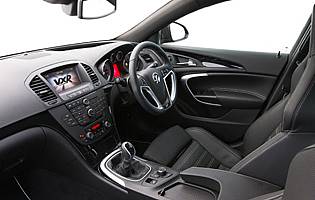 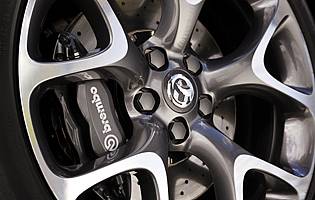 Following the launch of the Insignia D-segment model, Vauxhall has now introduced a VXR performance variant boasting more power than previously available and an advanced four-wheel drive transmission and tuned chassis. Designed as a rival to performance variants from premium manufacturers, it attempts to combine high performance with practicality and tractability.

The Insignia was always intended as a car to improve Vauxhall's standing with those business drivers typically enticed by the German premium manufacturers. Big improvements in styling and quality have seen the saloon, hatchback and Sports Tourer estate models get a warm reception from buyers in the sector but, in order to truly cement the Insignia's standing with the top dogs, a hard-hitting performance version was required.

The Insignia VXR takes up this role with an adapted version of the four-wheel drive system and turbocharged V6 engine that previously topped the Insignia range. The unit has been tuned to offer an impressive 320bhp and the intelligent four-wheel drive system now boasts an electronic limited-slip differential to improve road holding and traction levels further. A specially designed front suspension assembly uses clever geometry to ensure the front wheels retain the perfect footprint on the road regardless of steering angle and the chassis uses an adaptive damping system that's capable of continually adjusting damper ratings for improved performance.

Inside a high level of equipment and trim is standard, while a sports steering wheel, sports pedals and embossed Recaro Sports seats are the only real indicators of the Insignia VXR's performance potential. In five-door form, the Insignia VXR boasts a spacious cabin, sleek profile and large boot. Four-door saloon and Sports Tourer estate body styles are also available.

From the outside, the Insignia VXR can be identified by its large, bespoke alloy wheels (huge 20-inch versions are optional), additional air intakes, broad rear track and VXR badging on the rear. Yet, despite the changes, the model remains discreet and relatively subtle compared with the bolder Corsa and Astra VXR and the VXR8, meaning it can appeal to a slightly more mature audience.

Our verdict on the Vauxhall Insignia VXR 5-door

The combination of the comfortable and practical Insignia body, finely tuned chassis, intelligent four-wheel drive and powerful engine is hard to fault in the Insignia VXR. It seemingly covers all bases with its highly entertaining driving experience, refinement and everyday usability. Drivers should not be put off by the badge; the Insignia VXR is every bit as good as its established premium rivals.

Although it offers impressive value for money considering the specification and power-train, the Insignia VXR will penalise the wallet with higher than average fuel consumption - very high when driven hard - and higher insurance premiums due to the performance nature. Four-wheel drive will spread the load when it comes to tyre wear, however, and its ability to play dual or even triple roles may negate the need for a sports car toy alongside the family car.

The large rear hatch uncovers an enormous and tidily proportioned boot that can be extended by folding the rear seats flat. In the front, space is generous despite the curved, wrap around effect of the dash assembly and the large transmission tunnel that creates a sporty cockpit for front passengers. The rear is spacious too, but the sloping roofline slightly infringes on headroom and creates the impression that the rear is less accommodating than it actually is. Legroom is very good and there's plenty of storage available in the front of the cabin for oddments.

The Insignia's spread of buttons can be daunting at first, particularly because of the small lettering, but once familiar with the layout it all makes sense. Additional controls for the audio can be found on the steering wheel along with cruise control settings, and sat-nav controls mounted next to the armrest are very useful. The instrument layout is traditional and concise and aided by the LCD panel for the comprehensive trip computer. Some of the controls, such as the rear windscreen wiper, are less traditionally, but still sensibly, positioned and chrome finish to the knobs and bezels is a nice touch.

The Insignia is an inherently comfortable car to travel in and, despite the performance increases, the VXR version is no different. As a high speed motorway cruiser it can rival the premium contenders thanks to excellent noise isolation and a capable chassis that rides bumps very well. The Sport and VXR options firm up the ride and responsiveness but without compromising ride quality. The Recaro front seats are amply proportioned and very comfortable and the back seats will fail to take a toll on passengers.

The Insignia maintains a strong standard of security with remote central deadlocking, alarm and immobiliser. Covered storage in the front armrest and glovebox means valuables can be kept out of sight and the boot contents are shielded from view by the parcel shelf.

Standard ESP along with seat-side, curtain and front airbags offer an excellent basic safety package in the Insignia. This complimented by a raft of extraneous aids such as auto lights and wipers that make the process of driving less demanding. Built to offer a high level of protection in the event of a crash, backed by impressive crash test results, the Insignia poses few risks to occupants. Four-wheel drive comes with its own safety benefits and tyre pressure monitoring is also standard.

The Insignia VXR's four-wheel drive system means it is able to deliver the engine's impressive power with very little drama. Traction is excellent meaning quick getaways are on the cards and the advanced front chassis geometry means the car constantly feels glued to the road surface. Using the Sport and VXR buttons located on the dashboard the driver can firm up the steering and chassis and make the throttle more responsive - paying dividends in terms of driving pleasure. However, in normal mode the Insignia VXR makes for a sure-footed motorway cruiser.

An excellent family car thanks to its roomy and practical interior and large boot, the Insignia VXR can play triple roles as family transport, sports car and business car. It's a little noisier from the outside and thirstier than most family cars, but for those willing to live with the cost it will suit family life well.

The Insignia VXR is not a vehicle targeted at the first time car buyer and, although easy to drive, will be too powerful for the majority of novice drivers. More suitable models can be found elsewhere in the Vauxhall range.

The Insignia is a concerted effort on the part of Vauxhall to move away from the dowdy image that haunted the Vectra. The VXR is the most aggressively styled and arguably the most attractive model in the range despite remaining relatively discreet when compared with the other models in the VXR line-up, particularly those aimed at a less executive audience. Material quality is good and build quality seems strong with impressive levels of refinement inside.

A well proportioned car, there are few issues with accessing the front or rear passenger sections of the Insignia VXR. The Recaro bucket seats do have a small lip to be negotiated but this is hardly an issue. The rear hatch is huge, offering unhindered access to the boot.

Satellite navigation is an optional extra for the Insignia VXR, but where present it's an excellent system with clear and stylish mapping. Cars without sat-nav do not get the large colour screen, with information conveyed using an orange-on-black display similar to that within the instrument binnacle. A high quality standard sound system includes a DAB radio with MP3 compatibility and a six-disc CD changer incorporated into the dash. The system delivers excellent quality, although the swathe of buttons and knobs to control it takes some getting used to.

Red, white, blue, black, grey and silver are the colour options for the Insignia VXR. The red and blue are more eye-catching on a car of this size, the other shades offering a more subdued and discreet profile. A part leather interior is standard; embossed Recaro seats add to the sporty feel inside and the ambience is made moodier with metallic inserts and a piano black finish around the centre console and wrap-around-effect dash top.

The Insignia is a large vehicle and, although it should pose no real issues when it comes to parking for drivers used to D-segment proportions, rear parking sensors would have been a welcome addition to the test car. For a four-wheel drive vehicle the turning circle is very good, but the car can scrub its front tyres a little when manoeuvring on full lock at low speed.