Lower stance and unique colours mark out the Nurburgring Edition 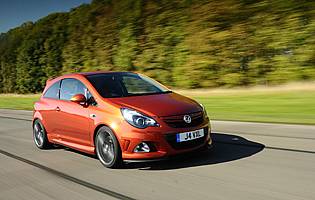 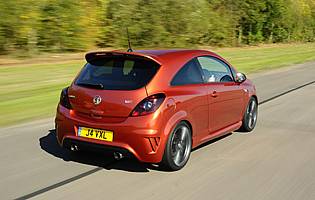 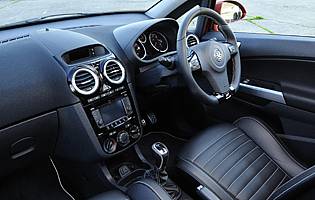 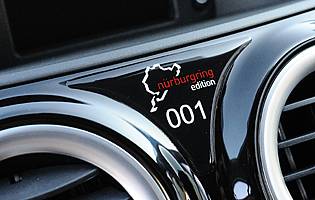 The Nurburgring Edition is the pinnacle of the Corsa VXR's development curve. The VXR has seen several sets of improvements in the shape of limited editions during the main model's life cycle, but this one goes further and with more conviction than any of its forebears, using specially-commissioned parts from some of the best suppliers in the business.

It's a very obviously low car, having been dropped down another 20mm at the front and 15mm at the rear, in addition to the standard car's existing ride height reduction. That means suspension travel is fairly minimal but since the suspension springs and dampers are specially made by Bilstein, it's no surprise that despite the car being no Rolls Royce, its ride is very well controlled and collected. It also shows very little body roll.

Another of the Nurburgring Edition's key upgrades is an old-fashioned multi-plate mechanical limited-slip differential, which sends more power to the wheel with more grip, eliminating power understeer. On a dry road - and often even a wet one - the reality is that this Corsa, with its wide, grippy tyres, will keep gripping around corners for as long as you dare to keep the throttle pinned.

A power hike to 202bhp is the result using 98 RON petrol, up from the standard car's 189bhp. There's a large swell of torque, too, but at low revs turbo lag is especially noticeable. It's better at higher revs but it's still not as instant a response as a naturally-aspirated engine gives. Its steering is good, offering respectable feedback although there is definite torque-steer through the lower gears.

Boasting an appealing cabin environment and serious pace, the only curious thing on the road is that the engine makes quite a low note and runs out of revs much sooner than it sounds like it should. It takes some of the aural excitement away from the drive, but the truth is that the Nurburgring Edition is quite a brutal car in the way it delivers its thrills. It's all about creating lots of G-force in all directions and is equipped to do just that.

Our verdict on the Vauxhall Corsa VXR Nurburgring Edition

This special edition is no longer a cheap route to driving kicks. That said, the kicks are much larger than in the standard car, and the finished product feels much more complete. It's breathtakingly grippy, fast enough never to be left behind by another hot hatch and offers big adrenaline hits. The price will put some people off, but for the best of the breed it's worth paying.

Modest road tax bills are fine, but insurance is pricey and when driven hard it uses petrol very quickly indeed. Running costs will therefore depend largely on how it's used, with decent economy possible when driven with restraint. Servicing costs may be more expensive than for the standard VXR, because of the performance tweaks it comes with.

Aside from the visual differences the cabin is very much like the standard VXR's, which also has very bulky seats. Front seat passengers have plenty of space, with headroom aided by the low-set seats. In the rear, space is good for the size of the car, but legroom is slightly reduced over the non-VXR Corsa. Practicality is good, other than the entry and exit difficulties, with lots of storage space for oddments and a useful false floor in the boot.

VXR-specific instruments are the stylish side of simple, and look particularly nice at night. The instruments have VXR badging and design, and the centre console is a fitting style. The rest of the controls are as standard, which means clear and attractive buttons and switches that are easy to find and operate.

Despite being a lairy hot hatch, the Corsa delivers an acceptable level of comfort. The ride is composed despite the firm suspension, and wind noise is kept in check. Engine noise levels do increase as the revs rise and in particular the ultra-low profile tyres create a lot of roar. On the motorway it eventually becomes wearing.

Security equipment is adequate rather than outstanding. As standard the Corsa VXR gets an engine immobiliser and alarm, as well as remote central locking. Features such as locking wheel nuts and a separate stereo and display unit help to deter casual thieves.

As is usually best with high-performance cars, a high level of active and passive safety comes as standard with the Corsa VXR Nurburgring. There is ESP, front and side airbags and ABS. This edition's brakes have been upgraded to Brembo units that stop the car more quickly than the standard ones. Additionally, features such as adaptive lighting are also available as options for added peace of mind.

This is the main point of the VXR brand, and this is the top of the Corsa tree. With huge cornering grip, fabulous brakes and a potent engine, the VXR Nurburgring is something of a brute. Wrestling with it as much as you dare is part of its significant appeal, although it's not perfect. The engine noise is quite low-pitched and doesn't give enough aural entertainment, and for the same reason it feels like it runs out of revs too soon.

This version of the Corsa VXR could perform the family role at a push, but the fact is that with the three-door only format and large bucket seats restricting access to the rear seats, even carrying child passengers could be awkward. The rear area is very enclosed as well, and children usually prefer a good view to keep them occupied.

The Corsa range is very popular with first-time buyers because of its style, size and price. The VXR version is much more extreme, though - even more so with this special edition. The price and size may be within the reach of some new drivers, but the performance is far in excess of what the inexperienced should have, and insurance will probably be unobtainable for a young driver with little or zero no claims bonus.

All Corsa VXRs give the impression of being high quality with a good standard of finish, but the Nurburgring is even better thanks to white-stitched part-Recaro seats. Clever design also adds to the feeling of quality. The Corsa's image is strong, aided by the looks and performance of the car but also of the VXR sub-brand, which prizes values of high performance and racy styling.

Getting into the heavily sculpted front seats is easy enough thanks to the long doors, but the substantial side bolsters on the expensive seats do make it more awkward than in a regular Corsa. The rear passenger area is hard to get into, though, because the bolsters stop the seat back folding forward properly and the seat belts get in the way.

The Corsa VXR gets a radio/CD unit as standard, which also features MP3 CD compatibility, a USB input socket, a separate display and steering wheel controls for ease of use. The sound quality is very good and the unit is simple to operate. There is an in-built sat-nav but it's not the most intuitive of units.

The Nurburgring Edition is fitted as standard with shiny 'piano black' trim on the centre console, which is available on other Corsas as an option. it adds an extra sense of style and high quality to the cabin, especially with the limited edition Nurburgring graphic stuck on top. One black mark is the use of a lot of dark colours, which can make the cabin feel a little gloomy.

Thanks to well-engineered speed-sensitive power steering, the VXR is easy to manoeuvre into parking bays. Its compact size and good steering lock mean it can be squeezed into small spaces, too. On the downside the rear pillars are thick, which does hamper the over-the-shoulder view.

Abarth Punto Evo Esseesse Attractive and good fun, but at its best driven well inside its limits