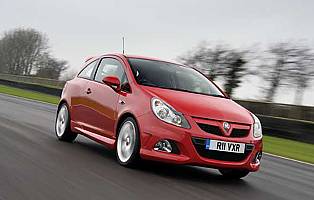 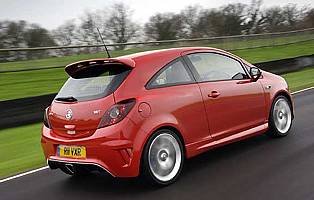 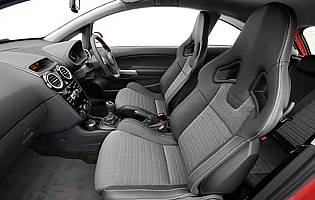 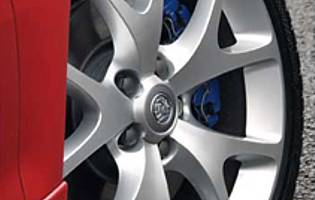 With the introduction of the Corsa VXR, Vauxhall has completed the model range of the impressive supermini, as well as adding another car to its powerful stable of performance cars. Building on the strengths of the standard car, it is aiming for class honours in the small hot hatch sector.

All the VXR models in the Vauxhall ranged are distinguished by an aggressive exterior appearance, and the Corsa is no different. From the front, a deep front bumper incorporating a large airdam hints at the performance on offer, while side skirts and a roof-mounted spoiler add to the visual appeal. Triangles are a design theme repeated throughout the car, notably in the shape of the door mirrors and the exhaust, which add extra distinction to the shape.

Mechanically the Corsa VXR borrows its basic layout from the standard car, with a transverse front-mounted engine and front wheel drive. To give the desired level of performance, the 1.6-litre turbocharged petrol engine already seen in the Meriva VXR has been used, although in this installation it produces an impressive 189bhp and 170lb/ft of torque, with an overboost facility that allows 192lb/ft of torque for five second bursts.

Elsewhere, the Corsa VXR rides much lower than the standard car, thanks to suspension lowered by 12mm at the front and 19mm at the rear. 17-inch alloy wheels are fitted as standard with the option of 18-inch wheels, both of which are fitted with high performance tyres. Larger diameter brake discs are fitted front and rear, while ESP is fitted as standard, all of which combines to offer a high level of performance and safety.

Inside there are numerous changes to differentiate the VXR from the regular Corsa. Most notable are the Recaro seats fitted as standard, which are attractive to look at as well as offering superb comfort and support. The three-spoke steering wheel is heavily sculpted and has a flat bottom with the VXR logo, and the instruments carry VXR graphics.

Our verdict on the Vauxhall Corsa VXR

Although the competition in this sector is more fierce than ever before, the Corsa VXR offers a highly impressive blend of attributes that make it a strong all-round contender. It also represents something of a bargain, undercutting many of its rivals yet offering very high performance and good equipment levels.

Running costs for the Corsa VXR will be respectable, with decent economy possible when driven with restraint. Insurance and servicing costs should also be reasonable, especially when the impressive price tag is taken into account.

The cabin space of the VXR is virtually identical to that of the regular car, expect for the space taken up by the bigger Recaro seats. Front seat passengers have plenty of space, with headroom aided by the low set seats. In the rear, space is good for the size of car, although legroom is slightly reduced over the standard car. Practicality is good, with lots of storage space for oddments and a useful false floor in the boot.

The layout of the Corsa's cabin is excellent, with a few enhancements for the VXR version. The instruments now have VXR badging and design, while the gearknob and steering wheel are also unique to the VXR version. The rest of the controls are as standard, which means clear and attractive buttons and switches.

Considering its status as a performance car, the Corsa delivers a good level of comfort. The ride is composed despite the firm suspension, and wind noise is kept in check. Engine noise levels do increase as the revs rise, but at a steady cruise it is far from unacceptable.

An alarm and immobiliser is essential on a car likely to gain this much attention and Vauxhall have the good sense to fit both. Although not on the options list a tracking device would be a worthwhile investment.

A high level of active and passive safety comes as standard with Corsa VXR, including ESP, front and side airbags and ABS. Additionally, features such as adaptive lighting are also available for added peace of mind.

The main reason for purchasing the VXR over the regular Corsa would be the driving pleasure, and on this factor it scores highly. The engine is enjoyably noisy when extended and delivers very impressive performance - on full boost the Corsa is a fast car, and the gearbox is an aid to getting the most from the engine. The steering is sharp and well weighted and the brakes are firm, providing plenty of reassurance. The suspension is also well honed, resisting roll and maximising grip but without delivering a poor ride.

The Corsa VXR can perform the family role, although with the three-door only format and large bucket seats, access to the rear is not as simple as it could be.

Although the Corsa is a supermini and therefore popular with first car buyers, the VXR version is much more extreme. The price and size may be within the reach of some new drivers, but the performance is far in excess of what the inexperienced should have, and insurance costs will be high for someone with little or zero no claims bonus.

The Corsa VXR gives the impression of being a high quality car, with a good standard of finish throughout. The use of materials and clever design also adds to the feeling of quality. The Corsa's image is strong, aided by the looks and performance of the car but also of its VXR stablemates, which share the same values of high performance and racy styling.

Getting into the front seats is pretty simple, thanks to the long doors, although the substantial side bolsters do make it slightly more difficult than a regular Corsa. The same goes for the rear, with the bulky front seats reducing the amount of room although entry is still straightforward.

The Corsa VXR gets a radio/CD unit as standard, which also features MP3 CD compatibility, a separate display and steering wheel controls for ease of use. The sound quality is good and the unit is simple to operate.

The VXR is fitted as standard with piano black trim on the centre console, which is available on other Corsas as an option. This adds an extra sense of style and high quality to the cabin, which already sets a good standard. One demerit is the use of a lot of dark colours, which can make the cabin feel a little gloomy.

Variable power assisted steering is a useful feature on the VXR, and its size means it can be squeezed into small spaces. On the downside the rear pillars are relatively thick, which does hamper the over the shoulder view.