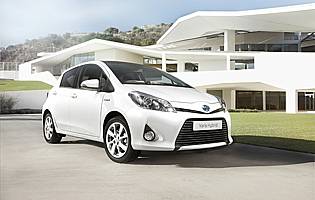 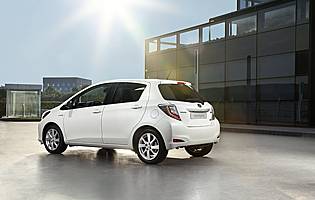 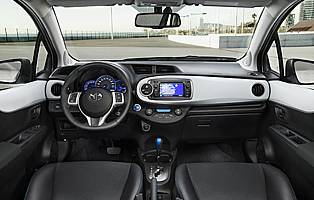 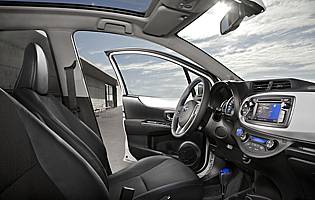 With the largest range of hybrid cars on the market and still more to come, it should comes as no surprise that Toyota has taken the decision to create a dual-power version of its Yaris supermini. By doing so Toyota now offers the little Yaris with petrol, diesel and hybrid petrol powertrains, giving buyers more choice than with any rival at present and also recognises a general downsizing trend in the market.

The starting point for the Hybrid is the third generation car which appeared late in 2011. Increased external dimensions gave it more presence on the road than the outgoing car, while the styling aimed to increase its appeal at the younger end of the market without alienating the older core buyer.

To look at there is very little that distinguishes the Hybrid from the standard Yaris; apart from the front end it is only discreet blue badges that indicate the dual-power under the skin. However it is the extra drivetrain components that enforce a design change; at the front there is a much larger grille for increased cooling and the result is a Yaris with pleasing extra personality.

The additional drivetrain components consist of an electric motor, transaxle and inverter which are all packaged around the engine which is itself a downsized version of the four-cylinder petrol unit already seen in larger Toyota hybrids. A further component is the battery pack which has been neatly fitted under the rear seats alongside the petrol tank, which therefore maintains the same luggage space as the standard car.

Paired with a CVT gearbox for maximum efficiency, the hybrid system allows the Yaris to run in pure electric mode up to 31mph and as far as 1.2 miles, petrol-only power or on both petrol and electric power for maximum acceleration. There is also an Eco mode for maximum efficiency which reduces the drain of power-sapping equipment such as the air conditioning.

Our verdict on the Toyota Yaris Hybrid T4

Adding the hybrid drivetrain to the Yaris certainly gives the buyer extra choice, and the electric-only mode benefits both emissions and noise levels. The driving experience is no better than a standard Yaris however, and for many buyers a diesel version will offer more flexibility and performance and similar economy and emissions at a reduced cost.

With economy and emissions at the forefront it comes as no surprise that the Yaris Hybrid will be very cheap to run. The impressive economy is arguably more beneficial because of the respective cheapness of petrol over diesel too. Insurance costs should also be exceptionally low.

The Yaris makes good use of every available inch of cabin space, and regardless of where you are sat there is good head and legroom available. The clever packaging of the battery also means that the boot space is not diminished over the standard Yaris, and up front there are small but numerous storage areas.

The Yaris has a very simple control layout, with very few buttons and the Toyota Touch system looking after most of the navigation and audio options. A power meter replaces the rev counter to clearly indicate the functions of the hybrid system, while there are more details displays available within the touchscreen system. The only demerit is the number of beeps that the system can emit; a radar trap, speed limit change or even excessive acceleration can cause the car beep with no obvious way of silencing it.

Although relatively modest in respect of the amount of luxury on offer, the Yaris does at least deliver a comfortable driving environment. The seats are relatively flat and therefore do not offer much in the way of side support but offer respectable comfort on longer journeys. The large glass area helps to fill the cabin with light, while standard dual-zone air conditioning across the range is also helpful. Silent running is good news at low speeds, but at higher speeds there is inevitably a little more noise.

Careful packaging of the hybrid components not only saves space but ensures potentially harmful elements such as the battery pack are tucked well out of harm's way. Add to that an impressive seven airbags on all models including a driver's knee bag and the Yaris has an enviable safety provision.

The Yaris certainly delivers in one aspect of the driving experience namely that it is very easy indeed to pilot, particularly in city driving. Whichever driving mode you choose to use the electric mode switches in and out without any fuss, and careful modulation of the throttle and viewing of the power dial that replaces the rev counter allows the driver to extract maximum efficiency from the powertrain.

A small family could certainly make use of the Yaris, blessed as it is with impressive interior space given its exterior dimensions. Two child seats could easily be placed across the rear seat while the boot is capable of swallowing even larger pushchairs. The cabin would also be able to cope with the worst that small children could throw at it - although some of the harder plastics may be relatively easy to scratch.

First-car buyers are inevitably drawn to smaller and more fuel efficient cars which certainly puts the Yaris Hybrid in the frame, and even with the additional complication of the hybrid system it shouldn't present any issues - aside from the automatic transmission which many newly-qualified drivers will not be familiar with. The main issue is simply expense; cheaper versions of the Yaris are likely to appeal more.

A long-founded reputation for quality is certainly in evidence here. Although the actual materials used inside the Yaris are only par for the class, they are quite clearly well put together and accurately so. Image-wise the Yaris is at something of a disadvantage compared to key rivals; it is commonly regarded as a car for the more senior driver and lacks youth appeal.

The Yaris certainly prioritises ease of entry over the exterior design, with a high-roofed silhouette to give tall doors and wide apertures. Particularly in five-door form climbing aboard is effortless, and the same goes for the boot; the tailgate is very light and pops open easily, and the boot floor is at a good height for easy loading.

The standard audio system fitted to T4 models offers six speakers, a USB port and auxiliary input as well as the Toyota Touch system with a reasonably-sized display screen. With just a few simple buttons and a control knob it is very easy to operate, and additional steering wheel controls make life even easier.

The relatively conservative exterior design is best exploited by brighter colours, and white particularly suits the shape. There is also something to be said for choosing a more noticeable colour for a car that can operate in near-silence in electric mode. Inside the Yaris has a lot of grey trim which does tend to make the cabin feel quite dark.

With a generous glass area, compact dimensions and very light steering at low speeds the Yaris is a very easy car to park. Better still is that T4 models and above get a reversing camera as standard which makes reversing into a space as simple as possible. In the right conditions parking will also be done under electric power only, giving smooth take up of power and silent running, which is also helpful.