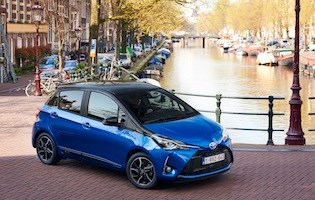 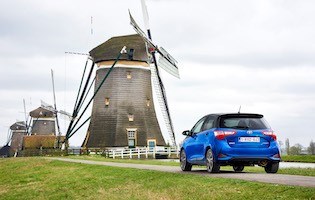 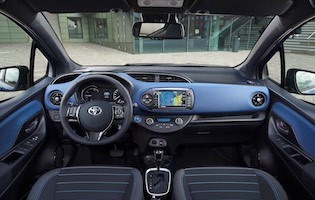 The third-generation Toyota Yaris was launched back in 2011. Since then, it has been through no fewer than two facelifts, with a number of changes implemented along the way. With this latest model, Toyota has improved the Yaris's safety offering considerably, and has also altered the engine line-up, ditching the 1.33-litre petrol engine in favour of a new 1.5-litre unit.

Visually the car is much the same as the older model, with only a handful of aesthetic changes being implemented – most noticeably to the rear end of the Yaris. Toyota has expanded the Yaris model line-up, with the new Bi-Tone trim being the most visually appealing, thanks to a two-tone paint scheme.

Inside, the Yaris is largely as you would expect from a Toyota – prioritising functionality and durability over form. While the cabin does feel rather drab and dated compared with those of some of its rivals, you can't help but get the feeling that it will stand the test of time, and be able to survive the wear and tear that cars such as these are subjected to as a part of family life.

The level of standard safety equipment will be a huge draw for the Yaris. Toyota's Safety Sense package is included on all Yaris models, and includes a wealth of driver aids that will give motorists that extra peace of mind.

There are three powertrains available with the Yaris. There's the entry-level 1.0-litre petrol engine, a larger 1.5-litre petrol unit as well as a 1.5-litre petrol hybrid. The hybrid is rather pricey, costing from £16,195, and is predicted to be the most popular model in the Yaris line-up.

Our verdict on the Toyota Yaris 1.5 VVT-I 6MT

With strong safety credentials and the option of a hybrid drivetrain, the Yaris will no doubt appeal to many people. However, its lacklustre interior, relatively high price and underwhelming driving experience do take away from Yaris's appeal slightly. There are certainly more capable cars in this segment for the money.

Up front, there won't be any problems concerning the amount of space available in the Yaris. There is plenty of head and shoulder room, so you won't feel cooped up. In the back seats, however, the same can't really be said. Yes, there is space for two adults to ride in relative comfort, but you'll likely find your knees brush against the front seats and if you're around six feet tall, your head will be very close to the roof. Boot space is a decent 286 litres.

As you might expect from a manufacturer such as Toyota, all the Yaris's controls are laid out in a sensible fashion that puts them within easy reach of the driver. While the infotainment system might be a bit on the slow side, the physical buttons on either side of the screen make it that much easier to navigate while on the move. The dials in the instrument binnacle are both easy to read as well.

As far as comfort is concerned, the Yaris didn't really give much cause for complaint. The seats were forgiving enough, and the ride was composed and refined. That said, this may have had something to do with the silky smooth Dutch roads that made up our test route. On the motorway, the Yaris felt planted and confident. However, it did suffer from a fair amount of wind noise, and the 1.0-litre engine in particular was noisy and intrusive at cruising speed.

Security shouldn't be too much of a problem with the Yaris, thanks to the fact that it has remote central locking and an immobiliser. All major parts are marked and traceable to the car's VIN as well. As the Yaris isn't a high-end luxury car, it shouldn't attract too much attention from thieves or vandals if left parked on the street, either.

While the new Yaris hasn't been crash-tested by Euro NCAP, it is unlikely that it will score anything under five stars when the time comes – thanks to its strong level of standard safety equipment. The Toyota Safety Sense package is standard across the Yaris range, and includes pre-collision warning, autonomous emergency braking, road sign recognition (not available on entry-level models), lane departure warning and automatic high beams.

Unfortunately, the Yaris doesn't exactly ooze driving appeal. When equipped with the smallest 1.0-litre it is incredibly slow, and even the larger 1.5-litre doesn't have a great deal of puff. We were unfortunately unable to really put the Yaris's handling to the test, as the roads around the launch location were all incredibly straight and flat. That said, the manual gearbox is rather nice to use, and the light steering meant it was easy to place the Yaris exactly where you wanted it.

Again, the fact that all Toyota Yaris cars – regardless of trim level – come with the Toyota Safety Sense package makes the Japanese supermini an appealing proposition as a family car. For those runs into town and to school, the Yaris is ideal – and if you opt for the hybrid, running costs will also be kept down. However, inner-city driving is its forte, and a larger car would make much more sense if your family goes on a lot of long-distance trips.

The Yaris makes a great deal of sense as a first car – particularly the 1.0-litre entry-level version. It's slow, easy to drive and packed with safety equipment thanks to Toyota's Safety Sense package. This includes autonomous emergency braking, lane departure alert, pre-collision warning and more. With a small, low-power engine, running costs will also be manageable.

Toyota is a brand built on the solid build quality and reliability of its cars – and the Yaris goes a long way to maintaining this image. While the Yaris's cabin doesn't feel terribly luxurious, it does give the distinct impression that it will still be in much the same condition as it was when new many years down the line. Thanks to a slightly revised exterior, the Yaris is that much more eye-catching now, too.

As Toyota only offers the latest Yaris in five-door guise, accessibility should never be too much of a challenge. The door apertures are large and the car sits at such a height that you don't have to bend down too low to get in.

All Yaris models aside from the entry-level Active specification come with Toyota's Touch 2 touchscreen multimedia system. While the screen does help make the cabin feel that much more modern and upmarket, the system itself is rather slow and unresponsive, which can get frustrating at times. Sound quality from the speakers is good, mind. Interestingly, satellite navigation is an optional extra on all models aside from Icon Tech, which sits in the middle of the Yaris range.

Toyota doesn't exactly have a reputation for making massively exciting cars, but it would seem it is trying to shake this with the latest Yaris. It's rather striking in its design, and a range of attractive colours help it to stand out – particularly the Bi-Tone models, which have a contrast black roof and door mirrors. Trims comprise: Active, Icon, Icon Tech, Design, Bi-Tone and Excel.

One of the main draws of cars in the supermini class is how easy they are to drive – and the Yaris is no exception. Thanks to light controls, manoeuvring the Toyota in tight spaces is never going to be too stressful. Decent visibility out of the cabin also helps to make parking that much easier. Aside from the entry-level trim, all Yaris models also come with a rear parking camera as standard.