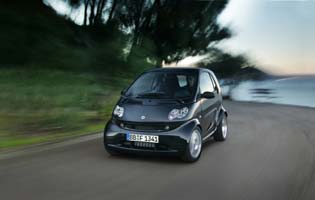 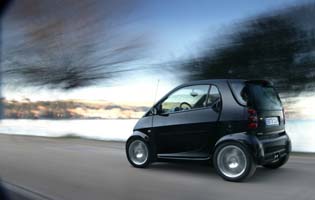 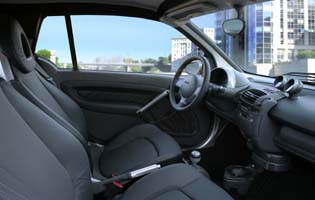 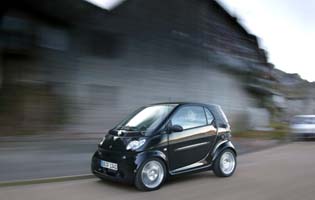 Like it or loathe it, Smart's innovative and genuinely different city runabout is here to stay. After a modest mauling from critics who couldn't see past the car's minor mechanical shortcomings, anyone with sense of adventure and a willingness to stand out has found the ForTwo the perfect antidote to conventional superminis.

It courted controversy right from the start, but the Smart ForTwo - formerly City Coupe and City Cabriolet - is now firmly part of automotive culture. Originally a product of an alliance between Mercedes-Benz and fashion watch maker Swatch, the radically-styled and packaged city car offers a credible alternative to the conventional supermini for anyone seeking park anywhere practicality and light relief from conventional looks.

Although the brand has been part of the DaimlerChrysler empire for many years now, the car remains the fashionable teenager to Mercedes' sensible, reserved parent. From the ForTwo's ridiculously short stance to its deceptively commodious cabin and amusing three-cylinder signature soundtrack, everything about the car shouts, ""Look at me!""

Convertibles and out-and-out sportscars aside, two-seat cars are in the minority in the city runabout sector. And yet, once you take the plunge with the Smart, you realise that the ForTwo is the perfect machine for darting about on your lonesome. Shopping can rest either in the passenger seat footwell or the surprisingly accommodating boot.

With the engine and driven wheels at the back, the two occupants are blessed with an abundance of room, while the short front overhang makes parking easy. None of this is at the expense of safety, though. There are airbags aplenty in the cabin and the car is equipped with ABS and ESP. The standard creature comfort count is pretty high, too.

For some, the car's unusual semi-auto gearbox is a little too unconventional and its outright speed falls short of run-of-the-mill rivals. Granted, the former is an acquired taste, but the latter is hardly a criticism when the sub-one litre, three-cylinder motor delivers its best around town.

Our verdict on the Smart ForTwo City Coupe Brabus

The latest generation of Smart's city runabout displays none of the annoying niggles of the first cars to leave the factory. Stable, refined, safe and well equipped, the ForTwo - in both tin-top and cabrio form - is a viable option for anyone seeking distinctive urban transport. Making a statement rarely comes cheap, but low running costs compensate for the car's above average screen price.

Unlike traditional city runabouts such as Ford's Ka and Daihatsu's Charade, the Smart ForTwo can be an expensive purchase, made more so by the long and tempting options list. Look past its screen price and the ForTwo is a frugal and cost effective proposition. Low emissions, a cheap road fund licence and decent fuel economy make this unusual contraption a surprisingly sensible car.

In the context of the urban landscape, the ForTwo offers much in the way of space and practicality. There's plenty of the former if your needs are modest, and the latter is ably demonstrated when you can capitalise on the parking space that fellow commuters have had to reluctantly pass by. Sure, the car will take only one other occupant and cross-continent jaunts are only for the dedicated, but around town there's little that beats the Smart as a rounded package.

What few controls there are in the ForTwo are sensibly placed and easy to use. The main instrument housing the speedo and important gauges is clear, while the decision to mount ancillary dials centrally but allow them to swivel was inspired. Both the ventilation and stereo controls are straightforward, with only the electric window switches letting the side down. Yes they're door mounted, but there's no one-touch function. At least the optional steering column-mounted gearchange paddles go some way to redressing the balance, and make shifting gear that bit more enjoyable.

It may not be the paragon of suppleness like, say a Skoda Fabia, but the ForTwo manages to remain surprisingly well behaved in the face of the speed bumps, potholes and changing road surfaces. Inside the cabin this translates into a surprisingly calm environment, until you crank up the speed. With the engine only inches from your behind, the noise is never far away - especially on long motorway journeys. One thing you won't feel is cramped, as the cabin is spacious and the seats comfortable in a snug, race car sort of way.

If there's one area where the Smart is like most other cars it's where security is concerned. The car's standard issue remote locking system works from the keyfob, and there's even a button to unlock the top half of the tailgate. A big, chunky button mounted on the fascia operates the door locks from the inside. The only downside is the car's distinct lack of a traditional glovebox - making it all too easy to leave belongings on show.

The Mercedes influence is clear to see in the safety department, as driver and passenger are well catered for in the airbag department. Under the skin, the ForTwo is equipped with anti-lock brakes boasting extra assistance in the event of an emergency, plus Electronic Stability Control (ESP) to help quell any bouts of over-enthusiasm. Smart also makes a big noise about its Tridion safety cell - essentially the protective metal structure surrounding the occupants.

The ForTwo was never designed as a driver's car, yet on the whole it feels surefooted in all but extreme situations. Given the Smart's short wheelbase, it does well to soak up vicious urban undulations. The driving experience sharpens up enormously with the Brabus variant, thanks to a number of tweaks from the tuning company and a handy extra slug of power. Suitably enhanced, the car can easily embarrass more potent machinery around town and sounds the part courtesy of a boy-racerish exhaust pipe.

Possibly one of the least suitable cars in which to transport a family, the ForTwo is more likely to be pressed into service as a second car to the family estate, people carrier or sport utility. As a convenient tool in which to run little Johnny to school it can't be faulted, but it would be foolish to ask any more from what is an urban runabout.

From the ease of use perspective, the Smart scores top marks. It can be parked with reasonable ease, and anyone who still finds cars with three pedals daunting after tearing up their L-plates will warm to the ForTwo's gearshift and likely be more forgiving of its quirks. It's powerful enough to keep up with traffic without intimidating the driver and, best of all, is economical to run. Low CO2 figures coupled to decent fuel economy make this Smart ideal for those watching the pennies, which should offset the car's higher than average screen price.

The car's grey plastics might not immediately appeal, but there's no denying that the fixtures and fittings are built to last. The same is true of the car's exterior, as panel gaps are tight and the paint glossy. The car's social standing is not so easy to define. For some, the car is a novelty, a toy. For others its popularity has reached cult status. The car has ceased to be just that, but has become part of a fun lifestyle, in a similar way to BMW's second-generation MINI.

To criticise the ForTwo for only offering two seats is to miss the point. What it does, it does well. The two seats are accessed easily via the car's wide opening doors. Room inside the Smart is generous, and two well-fed adults will not have to make any compromises. Although tempting, putting any oddments behind the seats will often see them slide out of sight - making them hard to retrieve. There are no such problems in the boot though, as the split tailgate makes depositing small items easy. The only pain is reaching the engine. The panel is secured by a fiddly catch, which can make routine checks tiresome.

The standard fit audio system is a modest affair but does the job of providing decent quality radio stations and playing CDs without a fuss. The car's compact dimensions may make any serious analysis redundant, but the integrated system is more than a match sonically for its vocal engine. Options include a handy CD storage area in the centre console and a disc changer. The only omission is the provision of steering wheel-mounted controls, which would prove handy despite the close proximity of the head unit to the occupants.

As befits a fashion item, the ForTwo's interior can be selected in a number of bright, youthful-looking colour schemes. Something like red fascia inserts and seats fit well with the car's outgoing demeanour. A more mature leather option is also available. The same is true of the car's exterior. The much-hyped exchangeable panels are no myth, you just don't see many people chopping and changing due to the cost and time involved. Inside or outside, everything feels durable and more than up to withstanding the daily knocks of an unforgiving urban environment.

The diminutive Smart puts other so-called city cars to shame. The ability to maximise gaps that other drivers have had to reluctantly pass over is a strangely satisfying experience. Visibility is good, which is hardly surprising given the car's lack of length and large glass areas. The only downside is the combination of the steering's noticeable absence of sufficient assistance at low speeds, and the gearbox's lack of finesse. Small, low speed manoeuvres require practice if you're not to send the car kangarooing down the road.

One engine option throughout the range, a three-cylinder turbo petrol motor of 0.7-litres in three different states of tune. In Coupe form: Pure 50 (50bhp); Pure, Pulse and Passion (61bhp); Brabus (74bhp). In Cabriolet form the entry-level Pure 50 is dropped. All cars come with Smart's six-speed auto gearbox with manual override.

Daihatsu Charade latest generation Charade is stylish, frugal and cheap to buy but unlikely to prompt a cult following

Citroen C2 funky-looking Citroen is a practical and affordable alternative

SEAT Arosa Spanish firm's runabout is spacious and cheap, if a little on the bland side