LED headlights are carried over from the Leon FR 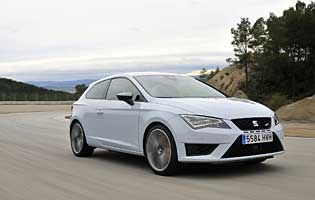 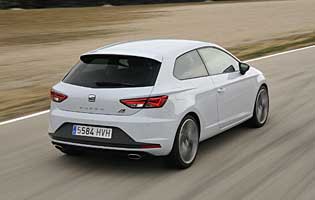 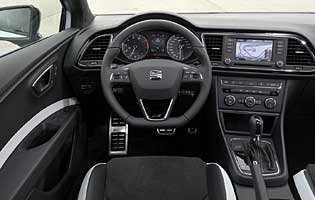 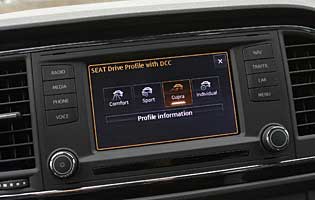 Britain loves hot hatchbacks and the original Leon Cupra cemented a place for itself in the hearts of a generation of drivers. The combination of a swell of turbocharged power, nimble handling and styling that looked like it meant business was enough to create an icon. With the second generation version representing a missed opportunity, Seat has thrown the dice again.

It had begun to look like the hot hatch was dead; a casualty of emissions laws and the need to decrease fuel consumption. Fortunately for fans of the breed the latest engine technologies have allowed them to continue for now, and this version of the Leon Cupra is even more powerful than its forebears.

It joins a fray in which for so long it stood out as the lairy, animal choice, but not any more. Now there are no crazy colours, no terrible torque steer and no bone-jarring suspension setups. It's much more sensible, having left one or two rivals to the overall power output spoils while itself aiming for a more rounded package.

Its styling is surprisingly little changed from the more ordinary Leon FR, using a similar body kit with an only slightly enlarged front grille. The same goes on the inside, with an interior that feels very much like an ordinary Leon's. It has undoubtedly changed attitude, despite the huge power output.

This model is lighter and nimbler than its immediate predecessor, which in combination with an electronically-actuated mechanical limited-slip differential and extra performance has created a much more involving driving experience. It's the suspension where most money has been spent, though, and the Cupra now rides superbly.

Our verdict on the Seat Leon SC Cupra 280

In pursuing greater sales the Leon has been sanitised slightly, but far from creating a fast but anodyne compact hatchback the end result is a brilliant combination of entertainment, sensibility and everyday usability. It delivers greater power than its more versatile rivals, along with more refinement than its faster competitors. The overall product isn't cheap, but it is remarkably good.

While this is far from the cheapest Leon to run when compared to its diesel counterparts, it offers an intriguing financial package against its direct alternatives. Its fuel economy and tax banding are competitive, but its purchase price is some way higher than one or two key rivals'. Residual values will not be the strongest among the Leon range, but should be in line with the market sub-sector.

For the most part the Cupra models share the same storage layout as the Leon FR. A good-sized boot suits a variety of tasks and can hold a medium-sized dog comfortably, but the carpeted boot floor might not appreciate it. The one difference of note is that the lidded storage compartment ahead of an FR's gear stick has been ditched for an open-faced bin.

Cupra-styled grey analogue/digital hybrid dials are a slight upgrade, and they perform their duties with exemplary effectiveness. The backlit numbers and needles offer a clear output at a glance. The sat-nav and media screen, however, which is only standard on the Cupra 280, is a let-down with low resolution and some old-fashioned graphics. The ancillary stalks are chunky and move with substance and precision.

The Cupra shares many of the traits of lesser Leons, which is to point out the slight wind noise around the door mirrors and road noise levels that depend heavily on the smoothness of the surface. Another trait that all occupants will be glad has been transferred is the comfortable ride, which takes the edge off all but the most severe potholes. Despite its large wheels, the Cupra 280 is impressively comfortable.

The remote central locking can open the boot independently of the doors, and can also be set up to open only the driver's door with a single press of the 'unlock' button. This anti-car-jacking feature should be especially valued on such a desirable car. Deadlocks can be engaged with two presses of the 'lock' button.

The Leon does well for safety as standard, but the Cupra has some tricks up its sleeve. Its wide, grippy tyres offer greater adhesion to the road surface and its larger brakes help it to stop sooner. On top of that its clever limited-slip differential can sense both understeer and oversteer, correcting them both before they become problematic. Elsewhere the cabin has the bases covered for airbags and occupant protection.

The Leon Cupra's myriad talents centre here, with a lightweight and agile attitude backed by a torque-rich, muscular engine and direct, accurate steering. The limited-slip differential would respond faster as an entirely mechanical unit, but performs its duties well as it is. On full-power gear shifts the exhaust delivers a cheeky and addictive boom. Drivers wanting to take it easy can do so and be rewarded with ride quality and comfort that belies the Cupra 280's 19-inch wheels.

From the parent's perspective the Leon Cupra is a perfectly serviceable everyday car. Its interior is so similar to the standard Leon's that there's little cause for concern over its ability to carry kids. The one item of note is that the Cupra-specific black and white upholstery will be more vulnerable to dirt and spills, but otherwise the Leon's intrinsic family-friendliness wins out.

First-time male car buyers all over the UK will lust after the attractive and aggressive Leon Cupra 280, but the chances of them being able to afford it brand new are slim. Compared to more appropriate first cars the fastest Leon isn't especially economical or cheap to insure, either, and then there's the matter of the Cupra's outrageous power output. Without enough maturity and experience the Cupra is a risky choice.

Seat has sprung something of a surprise with its latest cars, which are of a much higher standard than those who haven't tried them might imagine. The Leon feels solid inside and immediately imparts a sense of longevity. Seat as a brand doesn't enjoy the best reputation and could do with better scores in reliability surveys, but the latest tangible evidence inside its cars is positive.

This three-door SC version of the car assumes that owners will infrequently carry rear passengers, and thanks to doors that extend past the front seats access to the rear seats is not actually that tough. A five-door would still be better for accessibility, though. The boot lid is lightweight enough for the average person to open and shut with one hand, although some people might struggle if using one hand.

The standard stereo is a decent unit, operated through the main colour display's touch-screen interface. There is a Bluetooth connectivity option, while a Seat-specific connector is hidden in the glove box. It requires a specific Seat cable to allow third-party devices to hook up, which is not as neat as a simple USB connection. Nine speakers plus a subwoofer ensure a good spread of sound.

Some die-hard fans of the Cupra sub-brand will be disappointed to see the new Leon's colour palette. More sensible options are all that the car was launched with, covering metal grey, black, white and red. The grey is the most flattering, giving the Leon's svelte lines a mature but energetic, capable look that suits it well. The practical and largely straightforward interior might not be exciting enough for some people, bearing more than a passing resemblance to the ordinary Leon's.

The Leon is not a particularly difficult car to park, although the high rear shoulder lines can reduce visibility a fraction when reversing into a space. The car's standard fit parking sensors go some way to assisting the driver, however. The five-door Cupra will be better than the three-door in bay-type spaces thanks to its shorter doors, which open wider into any given space.