Leon shape is familiar and attractive 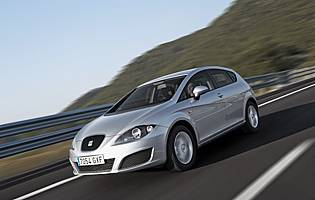 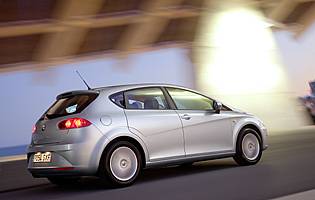 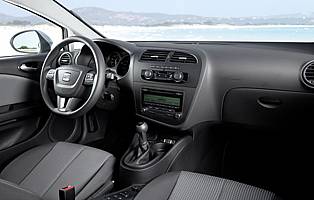 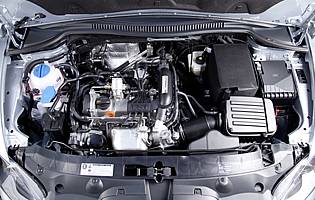 With manufacturers downsizing their engines across the board to increase efficiency without sacrificing power, Seat has taken the initiative by introducing the Volkswagen Group's new turbocharged 1.2-litre engine to the Leon hatchback.

Competing in one of the biggest selling sectors in the UK makes it important to stay on top of the game and, despite no longer being one of the new kids on the block, Seat's Leon mid-size hatchback continues to make good use of its sharp styling, respected platform, access to high quality Volkswagen Group parts and value for money ethos. It's also one of the leading models in the industry-wide downsizing trend.

A 1.-2-litre engine in a vehicle of the Seat Leon's size is a break with convention, but is a part of the downsizing strategies being employed by many vehicle manufacturers in a quest to lessen both emissions and fuel consumption. Volkswagen Group manufacturers have been making use of the 1.4-litre turbocharged petrol engines for some time, but the new 1.2-litre turbocharged unit is an even bigger step in the downsizing direction.

A relatively simple unit using an eight-valve design, the lightweight engine produces 105bhp, three more than the non-turbocharged 1.6-litre unit that it replaces. Despite power being increased, emissions have been considerably lowered, although not to the road-tax evading levels of the Ecomotive models. The inclusion of a stop-start system further improves the Seat Leon 1.2 TSI's eco credentials.

Outside of the engine bay, the Leon package remains familiar. Available in entry level S and marginally more expensive SE trim levels with the new engine, the models are never-the-less reasonably well equipped and retain the distinctive style that has become a familiar sight on the road.

Our verdict on the SEAT Leon 1.2 TSI

With performance actually improved over the outgoing 1.6-litre naturally aspirated petrol engine, efficiency up and emissions down, the decision to make the switch can't be questioned. Drivers should not be put of by the small capacity badging; the turbocharged unit is more than capable of powering the Leon. The outright figures may not be as impressive as the Ecomotive version, but the lower purchase price makes it worth considering as an alternative.

A reasonable initial purchase cost, particularly when compared to special eco-models which usually involve a premium, is very attractive even though the 1.2 TSI model fails to avoid road tax charges. Impressive real world economy will keep running costs low, too. For lower mileage drivers the 1.2 TSI could make a cost effective alternative to the Ecomotive model.

The Leon is one of the older family compact hatchbacks, with cabin space that is average for the class rather than exceptional. The large centre console offers decent storage space, although the glovebox is relatively short on space.

The layout of the Leon is attractive and practical, with an unusual instrument and switch design. The red illumination is clear and distinctive, while the information display allows easy control of audio, telephone and trip computer. Even on basic models there's a sporty feel to the thick steering wheel and stylised gear knob, and wheel-mounted audio controls for the SE model are a bonus.

Although the unit is a little grumbly, noise levels are reasonably well contained and at cruising speed there's little intrusion. Ride quality is also good, and the 1.2 TSI model boasts a softer ride than some Leon variants. Air-conditioning is standard as are electric front windows, and SE models get an upgrade to dual-zone climate control. The smooth operation of the stop-start system in collaboration with a petrol, rather than diesel, engine also benefits refinement.

All Leon models have remote central deadlocking as well as automatic door locking on driving away. An interior alarm system is also fitted as standard, and versions with alloy wheels have locking wheel bolts.

The Leon comes with an impressive collection of active and passive safety systems as well as the reassurance of a strong crash test performance. Tyre pressure monitoring and ESP join driver, front passenger, front side and curtain airbags.

Anyone expecting the small capacity engine to underperform in a vehicle of the Leon's size is in for a surprise as the turbocharged unit proves more than capable of pulling the hatchback at a respectable pace. The turbo delivers boost early in the rev range meaning there is little lag to overcome and power delivery feels smooth and progressive at the wheel. The fifth gear is long for motorway use, but well-spaced ratios mean there's no excuse for being short on acceleration. The Leon feels light and responsive, with an engaging driving experience.

The Leon can perform family duties with very little effort, with Isofix mounting points on both rear seats and a useable boot. Taller teenagers in the rear may be a little short on head and legroom, but the Leon is competitive with most rivals in this segment.

Frugal, reasonably priced and easy to drive and live with, the 1.2-litre Leon makes a tempting choice as a first car. Although larger than the superminis novice drivers may traditionally opt for, the model offers the opportunity to up-size without a severe financial penalty.

Thanks to its Volkswagen Group parentage the Leon offers a good standard of quality, and although it may not offer quite the same standard of materials as its more luxurious partner brand, it is still impressive. In terms of image, the Leon certainly trades on its sporty looks and carries a strong degree of kerb appeal even in the more basic specifications. 1.2-litre models don't boast the same visual flair as the sportier trim levels, however.

Access to front and rear seats is straightforward, with decent sized doors that open to a wide angle. Access to the boot is also good, although the aperture into the boot could be wider and deeper.

Available in S and SE trim in the UK, the 1.2-litre TSI equipped Leon doesn't feature the same level of exterior flare as some of the more lavish models, but the modern and distinctive interior looks good in lighter shades such as the silvers and whites available. Inside, the interior features cloth seats that are as easy on the eye as they are on the back, but with a lot of dark plastics on show Leon interiors can feel a little gloomy. The red displays give it a moody character, however. SE models get 16-inch alloy wheels as standard.

The Leon has very light power steering at low speeds and a decent turning circle, although the restricted rear vision caused by chunky C-pillars is a negative. A fairly uniform shape and dimensions typical of the segment mean it should pose few problems in tight scenarios.

Ford Focus Econetic diesel is the most frugal in the range

Hyundai i30 1.4 petrol is extremely cheap to buy