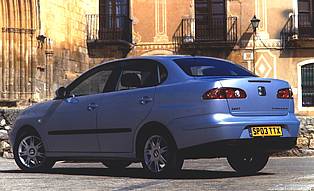 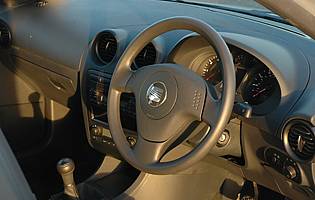 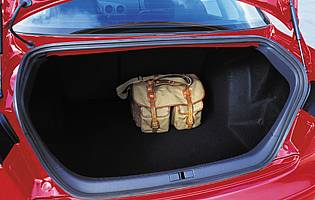 The compact saloon is something of a rarity in Northern Europe, unlike in the southern and eastern regions. This explains not only Seat's decision to offer a small Cordoba range but also the distinct lack of cars on the road. However, the Ibiza with a boot cuts a more upmarket dash than its hatchback cousin.

You won't see that many Cordobas on the road, although this has more to do with our dislike for compact saloons than any deficiency with the little Seat. On the plus side the car sports a modest boot, and it's hats off to the design team for making it look like part of the car and not some tin box casually welded on as an afterthought.

Being the focal point of the car, the boot is no gimmick but a useful addition. Anyone who baulks at a hatchback will no doubt warm to the Cordoba. More secure than a hatchback, saloons are often on the receiving end of reduced insurance premiums.

However, given the Cordoba's size, the boot is a little compromised size-wise. The opening is modest, making it tricky to load large or awkward items, although the space inside is considerable.

In truth, the main reason for choosing this car over, say, the Ibiza is aesthetics. It must be said that the Cordoba looks more classy and expensive than a comparable Ibiza. Putting it another way, the Cordoba looks less common. This is hardly a scientific observation but it's true, and there's a simple reason for that - this car is bought in very small numbers.

Our verdict on the Seat Cordoba Reference 1.9 PD TDI

Seat's Cordoba is a great example of how regional preferences have shaped the automotive landscape. In southern regions of Spain you'll lose count how many you'll see. Yet in the UK the situation is reversed. But if Seat's less sophisticated looking Ibiza isn't for you, the Cordoba could fill the void. It's all down to personal taste, after all.

The Cordoba can't match the bargain prices being touted by the Far Eastern competition, but you have to remember that it's something of an oddity in the UK and therefore difficult to position accurately in the small car marketplace. One thing's for sure, get a diesel if you want to reduce you fuel bill. The TDI 100 variant is plenty good enough, and endows the Cordoba with big car cruising ability. Elsewhere, running costs will be comparable to Seat's Ibiza hatch, but insurance could be a fraction cheaper as some companies perceive saloons to be a lower risk.

The Cordoba's modest cabin is not stuffed full of oddment spaces - you'll have to buy something like an Altea for that. What you do get is predictable supermini stuff; shallow door pockets and a small glovebox. And small is the word to best describe the amount of rear legroom available. This car might have four doors but don't expect adults to sit quietly in the back for hours. At least the boot is a good size and it's more secure than the Ibiza's load space. The Cordoba's size does mean that the boot aperture limits what you can squeeze through it.

No surprises here - the Cordoba's various instruments function well, although the backlighting can be tough on the eyes after prolonged exposure. Also, some of the minor controls located on the fascia are on the small side, the radio being one example. That aside, the steering wheel offers a decent range of movement, and the gearlever throw is short and precise.

There's no getting away from the fact the Cordoba's cabin is compact - snug, even. Two well-fed adults will rub elbows, although this is nothing compared to the situation in many conventional town cars. The Cordoba's seats are reasonably supportive and there's a good amount of headroom. Road and engine noise is also reasonable, while the car's firm ride is noticeable but on the whole not that uncomfortable.

Although the Cordoba doesn't rank alongside Porsches and Ferraris in the desirability stakes, it's good to see remote central locking, deadlocks, an immobiliser and, apparently, an anti-theft roof aerial. Paying more for the flagship Stylance model adds an alarm to the list of kit.

The Cordoba comes with a modest level of safety kit, which includes twin front airbags with a passenger cut-off switch, anti-trap front electric windows and Isofix rear child seat anchor points. Side airbags appear on the options list, which is a shame, as rival firms have got more generous with their safety kit.

Given the Cordoba's similarities with the Ibiza hatch, it's no surprise to learn the booted Seat can be driven with a reasonable amount of enthusiasm. The diesel engines deliver more than enough power, although they can be a little noisy. The car's steering, while light, is direct, and the gearshift is short and sweet. The Cordoba's ride is on the firm side, however, which doesn't help absorbing urban road imperfections.

This is not a family car in the conventional sense, the Cordoba is too small and its boot will struggle to swallow pushchairs and the like. Access to the rear seats is modest at best, making strapping a youngster into a child seat an interesting exercise. No, the booted Seat should be looked on as a second car to compliment the main school run hack.

For anyone not excited by the current crop of hatchbacks, the Cordoba might do the trick. It's not a big car, which makes it ideal around town, although the boot might make parking tricky for novices. The engine range is modest, if you exclude the range-topping 130bhp diesel, allowing insurance costs to be kept low.

In Northern Europe Seat doesn't have a strong image when it comes to saloons. The firm's old shape Toledo sold in modest numbers, and the same is true of the Cordoba. Most people seeking a small car will opt for a hatchback, but if you want to be different, the Cordoba and Skoda's Fabia are the two most obvious choices. Quality-wise the little Seat is up there with the aforementioned Skoda as they belong to the same VW group, after all

Access to the front part of the cabin is just like any other compact hatch: relatively easy but a little snug if you're over average build and height. Predictably the rear isn't as accommodating, but it should be manageable for most people when on short trips. Getting out might be more difficult than getting in, however. The boot, while deep and spacious for a car of this size, possesses a narrow aperture, although the tailgate does stretch down to the bumper line

Standard issue is a radio and CD player with six speakers. The unit and its controls might be on the small size but the sound quality is good. The higher specification Stylance model gets the same treatment. Overall the unit is a decent one but, compared to recent advances elsewhere, larger buttons and a bigger display would be welcome.

The Cordoba is hardly a big car and, in most cases proves easy to park. Light power steering and good forward visibility help enormously. At the rear it's slightly different thanks to the car's conventional boot, and you might struggle at times to judge the gap to the car behind. Not a Seat trait, this quirk is a feature of most saloons.

Mitsubishi Lancer Strictly speaking not a new car, but it is good value and spacious