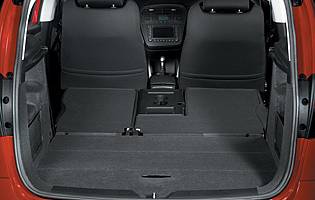 In a move away from the family hatchback format, Seat's Altea attempts to offer the best of both worlds: increased practicality but without compromising the driving experience. Taller than a regular car but taking up no more road space, the Altea concept is a brave one for a firm traditionally associated with conventional offerings. The car's styling is also radical, and a significant move away from the company's modest past efforts.

For as long as the company has existed - which isn't that long in car making history - Spanish company Seat has been associated with good value, honest cars. And those cars were often designed with a mild sporting edge, and was something that set them apart from all the other bargain motors on sale.

The same is true today. Seat makes cars that are good value for money and, thankfully, the mild sporty edge remains. For many years the firm has been part of the mighty Volkswagen Group, which has meant the ability to share components and, obviously, cut costs. This is all very well, but the firm was in danger of being just a VW clone - albeit a cheaper one.

Enter the Altea, Seat's first of many cars designed to look very different from past efforts, while offering above average levels of cabin space. Seat is, after all, a company chasing the family buyer - it doesn't offer a fancy sports car or roadster. As such the Altea combines increased versatility with interesting exterior styling and the firm's trademark sporty ride.

By and large the combination works. The only issue anyone could take with the car is the cabin's modest, budget ambience. When rivals are upping the quality levels, Seat has failed to follow and, sadly, has remained true to its budget roots.

Our verdict on the Seat Altea 1.9 TDI Reference

For all the hype, the Altea is, in reality, an over-large family hatch. That's not to say the concept is a failure - far from it. But with so many firms building cars a little bigger than their previous generation models, the Altea's unique selling point has become diluted. No matter, the car drives well and its cabin is indeed spacious. The only letdown is average quality of the cabin trim materials.

To its credit, Seat doesn't charge a huge sum of money for its Altea range. This generosity should be reflected in insurance premiums, while opting for a diesel variant can increase any potential savings. Servicing costs are unlikely to break the bank, but don't expect class leading residual values.

As a cross between a conventional hatch and compact people carrier, the Altea offers the best of both worlds. A modest footprint is backed up by a versatile rear seating arrangement. You can't remove them, but they split, tip and fold with relative ease. The boot, even with the rear seats in place, is spacious, while cabin space is also not an issue. Oddment storage is good for this class.

There are no surprises in this department, just clear, legible instruments and controls. In the main, everything will be familiar to anyone already used to a Volkswagen Group car. The raised centre console means the gearlever is closer to hand, while the stereo and ventilation systems are located conveniently high in the facia.

The Altea might be able to trace its roots back to more comfort-orientated VW products, but the rounded Seat is noticeably more sporty than a regular Golf thanks to the Spanish firm's more aggressive product positioning. This is reflected in the Altea's ride, which is on the firm side. You're also more aware of road and engine noise, with the latter especially true if a rev-hungry petrol engine powers the car.

There's nothing out of the ordinary with the Altea. The usual combination of remote central locking, immobiliser and alarm all feature as standard. And while the car is unlikely to attract huge amounts of attention, a visible deterrent, such as a steering lock, would be sensible idea - especially with car's fitted with the high value and obvious sat-nav system.

The Altea might not always come with all the right toys, but it does come will all the right safety kit. Twin front, side and curtain airbags are all present, along with the expected anti-lock brakes. Fulfilling its role as a family vehicle, twin rear Isofix mounting points are present. Traction control, which comes in handy with the torquey diesels, is standard too, while an electronic stability control is fitted to selected models.

True to form, the Altea driving experience is more than a little on the sporty side. The car's ride is firm - but not uncomfortably so. However, you will notice the difference over the likes of a regular VW Golf. The Altea's steering is direct if a little remote, and all the engines on offer are willing although the petrol units require a bit of work to release their potential.

What with the car's MPV-like raised seating, numerous cabin storage areas and capacious boot, the Altea makes a conventional hatch look less attractive as a family car. True, you can't change the seating positions drastically like you can in a people carrier, but the Altea does well considering its modest asking price.

There's no reason why the Altea can't be an able companion for a newly qualified driver. It's easy to drive and park around town, while the low power variants are plenty fast enough. The slightly raised driving position should also help make navigating through town easier as forward visibility is noticeably improved over a regular hatchback.

Seat has never enjoyed the same level of praise that's routinely showered on upmarket cousin Volkswagen. That said, Seat charges less for its products. As such, even now, fit and finish is average while the decision to use less expensive materials is obvious. Image-wise Seat promotes itself as an affordable, sporty brand. It has largely succeeded, although with three models - Toledo, Altea, Leon - styled almost identical to each other, this has meant some buyer confusion.

As is the case with taller than average hatchbacks, cabin access is rarely an issue. You step in, not down into, the cabin, which also makes it easier for less able passengers. Getting out is just as simple, although front seat occupants fare better thanks to a larger door aperture. At the rear, the Altea's tailgate requires a modest effort to lift or lower, if only because of its generous dimensions.

The standard set-up does a fine job of being user friendly and delivering good quality sounds. Where fitted, the car's steering wheel mounted controls are intuitive, although the main unit's display could be more legible - especially at night. Upgrades include a CD changer and a full-on sat-nav system. Its large screen is impressive but navigating the unit could be more straightforward.

The Altea's dramatic curves benefit from bright colours, with red proving to be a particularly good choice - especially if you want to emphasise the car's sporty nature. Inside, the cabin is typical Volkswagen Group sombre, as most of the cabin plastics are very dark or black.

In general the Altea is a modest car in terms of size, and should not prove difficult to park. The car's steering is pleasingly light at low speeds and its mirrors are a good size. The view aft through the rear window is adequate, while the lack of a conventional hatchback 'hump' makes it easy to judge distances when reverse parking.

Vauxhall Astra Rakish Astra is fun to drive and good value, although not as spacious as the Seat

Volkswagen Golf Plus Pricey Golf Plus is a little bigger than its namesake. No more exciting to drive, though