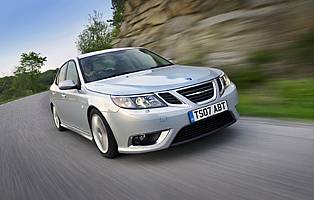 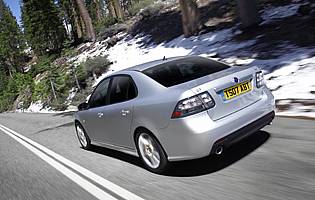 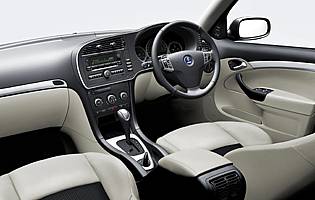 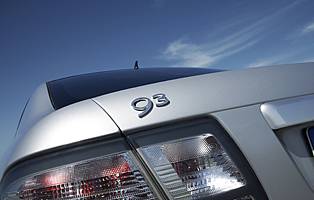 It's one of the most recognisable shapes on the road thanks to its use of generations old styling signatures, but that hasn't stopped Saab giving the 9-3 a mid-life facelift. The revised 9-3 doesn't only come with new body panels however; there are new engine choices, improved transmissions and revised trim levels too.

Saab's designers have taken their inspiration from the history books when re-penning the 9-3. The more aggressive appearance is largely reminiscent of the Saab 900 turbo. The clamshell bonnet makes a reappearance, the rising belt line is as distinctive as ever and so is the ""hockey stick"" curve of the C-pillar. As well as taking cues from the past, Saab has also looked to the future and incorporated elements from the Aero X concept car into the design, including a bolder front bumper with huge air intake and sill extensions.

Saab is clearly searching for a way to make its models even more distinctive in the competitive premium end of the D-segment, and has come up trumps in a number of areas. Firstly, the stylish new headlights incorporate an eyebrow of light that makes the car instantly recognisable day or night and will be adopted as a future Saab signature across its range.

Then, there's the inclusion of the first twin-turbo diesel four-cylinder engine in the world. The TTiD unit's tremendous torque is delivered alongside frugal fuel economy and smooth, lag-free, acceleration. A new two-litre turbo Bioethanol unit is also available in the revised model that actually delivers better performance when running on E85 fuel. Finally, the introduction of a highly advanced four-wheel drive system called XWD has allowed Saab to tune the range topping 2.8-litre V6 turbo to 280bhp. In standard front-wheel drive form, it delivers 255bhp.

To counter the increased engine range, Saab has dropped the trim level selection from seven to four options. Of course, simplifying the model line-up makes choosing the right model considerably easier and for the busy executives the model is aimed at that's a real bonus; especially as there are Saloon, SportWagon and Convertible options to choose from.

Saab's love of turbocharging has meant the company's car have always benefited from excellent performance, especially in the overtaking department. The 2.8-litre V6 takes that to another level with its tremendous pulling power from very low down. The fact that Saab has managed to keep the power in check through the front wheels is commendable, as is the tractable nature of the car under more sedate use.

The powerful engine comes with a liking for petrol, and the harder you push it the worse it becomes. Go easy and you can still expect to fall well short of 30mpg. Insurance premiums are liable to be higher than the less powerful variants too, although long service intervals will help ease the burden on the wallet.

A roomy saloon, the 9-3's roofline is higher than much of the opposition's and pays dividends in terms of headroom. There's also a healthy amount of legroom for rear passengers. The rear bench of the 9-3 folds flat in a 60/40 configuration which offers some additional practicality in terms of load carrying although the rear parcel self stays in place. The boot is quite generous anyway, and will cope with day-to-day tasks with ease.

The 9-3's dashboard is designed to arch around the driver - an obvious nod towards the manufacturer's aeronautical history but one that serves a definite purpose. It means the controls and displays are within easy reach and line of sight. The switchgear feels robust if lacking in flair, but there are some neat touches such as the handbrake lever that sits flush with the centre console and the mid mounted ignition barrel.

The 9-3 isn't quite as smooth and silent as some of the premium opposition, but it's still a very refined car that will waft serenely along a smooth stretch of tarmac given the opportunity. The larger diameter wheels of the V6 Aero model seem to pick out the bumps more readily but offer a far from uncomfortable ride. Inside, dual zone air con is standard and temperatures are also kept in check by heat absorbent windows. The 9-3's seats are particularly well tailored and extremely comfortable in the front and rear

As you would expect, the 9-3 features a strong security system including an alarm and immobiliser. The central locking, complete with deadlocks, is remote control operated from the key fob.

Safety is on of Saab's fortes and the 9-3 doesn't disappoint. The driver is aided by electronic systems including mechanical brake assist, cornering brake control, electronic brake force distribution and Comsense, which silences communication functions while the driver is steering or braking heavily to avoid creating distractions. A five-star safety rating comes courtesy of rigid safety cell with crumple zones, active head restraints and multiple airbags.

The 2.8-litre turbocharged V6 packs a real punch and the chassis has to work hard to put all the power down through the front wheels without turning the car into a wheel-spinning, torque-steer drunken mess. Saab has pulled it off though, through a clever combination of mechanical and electrical engineering. As a result the top of the line model is remarkably sedate to drive until the driver decides to make full use of the potential, at which point it's extremely quick but remarkably poised. Its overtaking potential is fantastic, thanks to the Turbo which provides torque across the rev range. There's nice engine and exhaust note when pushed hard, but the kids will sleep happily in the rear the rest of the time.

The 9-3 is an excellent choice as a family car - and it's one that can straddle the line between respectable executive motor and weekend minibus with ease. Three children will sit comfortably in the rear for long journeys and the five-star safety rating and myriad of impressive safety features are sure to win over parents.

Younger drivers might want to consider something smaller that the 9-3 and would certainly be advised to buy something less powerful than the 2.8-litre V6. Particularly affluent or confident young drivers might well consider it a strong choice though, as it's comfortable well, equipped and quick and will almost certainly top your mate's hot-hatch.

The 9-3 already had a good image as a sensible and stylish choice and the mid-term facelift certainly hasn't done it any harm. Its more aggressive styling gives it more presence on the road and it looks just as impressive on the move as parked up. The build quality is first rate, with tight fitting panels and a solid feel to the switchgear. The materials used are impressive too with fine leather inside the Aero as standard. On the road, the sound engineering speaks for itself, albeit in hushed tones.

The 9-3 actually strikes you as quite a tall car, meaning the high roofline makes access for driver and front passenger particularly easy. The four-door layout of the saloon has been well thought out, with front and rear doors roughly equal in length so they can both be opened in tight parking spaces easily. There are no surprises with the door open and the seats are placed at a sensible height.

A six-disc changer comes as standard with the Aero trim level trim, the controls for which are integrated into the minimalist centre console. With no sat nav display (it's a cost option that leaves no room for a disc changer) the controls are within easy of the wheel, although basic controls are built into the wheel anyway. Sound quality is good and aided by the car's refinement but a Bose upgrade is available if you really enjoy your music.

There are no fewer than 12 colours available for the 9-3, nine of them metallic. Two new colours have been added during the refresh to beef up the range. The face-lifted model features some subtle, and some not so subtle changes to the exterior trim but the comfortable and business-like interior remains largely untouched. The new front bumper with a large air intake is the most obvious change, but keen eyes will also notice new headlights complete with signature eyebrow lighting strip, new door handles, meatier sill extensions and a lack of rubbing strips. The revisions give the model a neater, more assertive image. Inside, both the Parchment and Black options suit the styling.

Despite having plenty of glass on show, the saloon is a little awkward to reverse due to the window line that rises towards the rear, leaving only a small rear window from which to gauge where the boot ends. That said, reversing sensors are standard on the Aero model so there's little excuse for bumps and scrapes.

Audi A4 You'll need the 3.2-litre petrol to match the Saab's pace