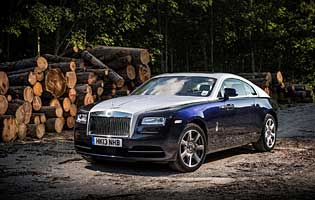 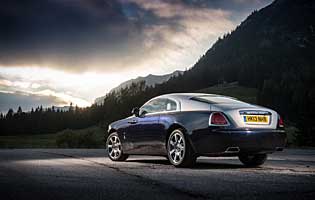 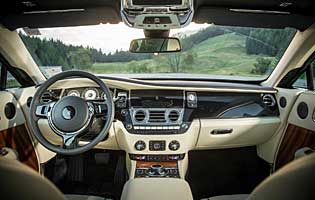 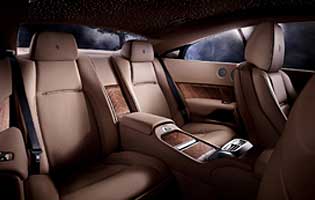 In a bid to attract younger buyers to the brand, Rolls-Royce has developed a car with a greater emphasis on performance and driver involvement. The Wraith might draw heavily from the Ghost for mechanical inspiration, but this two-door coupe promises to deliver an experience separate from the four-door stablemate.

Positioned as a more affordable and agile Rolls-Royce in the company's expanding stable, the Wraith offers owners a more engaging driving character. This attribute is important as so many owners prefer to let someone else do the driving. Rolls-Royce is banking on younger buyers wanting to take the wheel themselves.

The firm's Phantom is evidence that the Goodwood-based outfit is keen to offer something other premium luxury makers cannot. However, industry observers identified a gap in the market for a car appealing to the new wave of younger but no less wealthy buyers keen to enjoy their riches. For them, the Wraith is positioned as an attractive first step on the ownership ladder.

Bentley might be keen to promote its cars to keen drivers, but it's not something its rival has ever done. And while the Wraith hasn't been promoted as a sporting machine, its modest size should prove less intimidating to some. Packing a 6.6-litre V12 petrol engine, the Wraith is no slouch though, and its performance potential is delivered in Rolls-Royce's trademark unflustered style.

Some things in the Rolls-Royce universe haven't changed, however. The Wraith's cabin is as opulent as any other in the firm's line-up, although in keeping with the youthful audience target more contemporary and materials are offered as part of the standard colour palette. It's the same story colourwise regarding the car's exterior, with bold two-tone option providing a surprisingly flattering alternative to more conservative choices.

Our verdict on the Rolls-Royce Wraith Wraith

Rolls-Royce might take a different approach to Bentley when it comes to promoting its cars, but the former's Wraith can be driven with a surprising amount of enthusiasm. That in itself is a sign that the Goodwood firm is moving with times and keen to attract a younger audience. Taking the helm has never been a priority for owners, but the Wraith could change all that. There's also plenty to keep the traditionalists happy in terms of the usual refinements - just in a more agile smaller and rapid package.

Viewed in isolation the Wraith is an expensive car to purchase and run. Even amongst its peers the Ghost is at the top end of the scale, thanks in part to the bespoke nature of its construction and the choice of engine. Of course, if you have the means to purchase such a car, these will be trivial issues.

The spacious cabin offers luxury accommodation for four adults and there's never a feeling of being cramped or having to compromise in any way, despite the Wraith being a two-door coupe. Head and legroom in the back is generous, while oddment space is also never in short supply. At the rear, the car's boot is, as you'd expect, capacious.

The Rolls-Royce way of doing things is a little different from the norm. Conventional instrumentation is kept to a minimum and there's none of the usual flashing warning lights and other distractions you'll find in a regular car. The column gearshift takes a little getting used to though, and BMW-esque colour displays and audible warnings give away hints as to the car's parentage. That said, the various controls all prove intuitive after a short learning period.

It's well known that Rolls-Royce cars offer one of the most luxurious and comfortable experiences out there and the Wraith is no different. With plenty of room in the cabin and exterior noise suppressed to levels its rivals struggle to match, the Wraith is an extremely comfortable experience. And, for a change, this is also true for rear seat occupants despite the car's driver orientated bias.

Keyless entry and ignition is the norm here, which is on par with other cars in this sector. A comprehensive security package is also present, although given the car's desirable nature you might want to consider a tracking device for added peace of mind.

The Wraith presents a safety package that will be familiar to owners of premium luxury cars everywhere. From a plethora of airbags to an array of electronic stability measures, every angle is covered.

While it's clear that the Wraith is a quiet and refined car at sensible speeds, its smaller size encourages owner-drivers to take the wheel more often. And they won't be disappointed, as the car can be successfully driven with a surprising amount of enthusiasm. The steering might be too light for some but the car's engine and gearbox are smooth and responsive, while pitch and roll is kept to a minimum at all times.

In principle the Wraith's spacious cabin is its strength. That cabin is, however, trimmed in a range of expensive materials, meaning toddlers with sticky fingers and dirty shoes aren't really welcome. And it's only really a four-seater, which means a high quality people carrier or SUV might be a better option.

It goes without saying that the Ghost isn't an ideal first choice. Its size and cost should put most people off. If, however, you have access to such a car you'll find it easy to drive - once you've become used to its size.

The car's wide opening doors make access to the cabin straightforward, while the raised seating position means you can slide in with little effort. At the rear the surprise is how easy it is to reach the back seats, even for adults, proving that it is possible to remain graceful at all times.

Like so many elements of the car, so long as you have the money almost anything is possible. Bespoke infotainment systems are not unusual requests for Rolls-Royce engineers, however the basic offering is a powerful and easy to use system combining audio, telephone and sat-nav functions. Rear seat screens and the ability to play multiple sources at once are also possible and easy to master.

The bespoke nature of the car means you can opt for any colour and trim combination you want, with cost being the only limiting factor. In reality, the Wraith looks its best when selected in a complementary two-tone scheme. In the cabin, it's hard to select one of the various wood trims and leather upholstery combinations that doesn't look good.

There's no hiding the fact that the Wraith is a big car by modern standards, even if it's a fraction shorter than a Ghost. Thankfully all the major controls are light and accurate, which makes the job a little easier. Parking sensors and external cameras help your chances of success, although there's no substitute for practice.

BMW 7 Series Shares more than a little with the Wraith under the skin; looks an acquired taste

Ferrari FF High-tech Italian alternative is capable, roomy and rapid but possible too extrovert for some