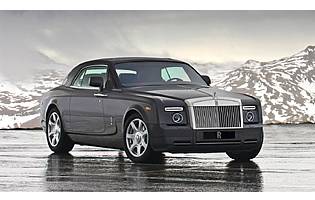 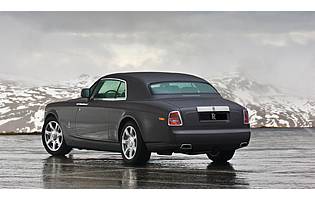 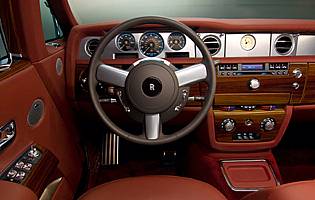 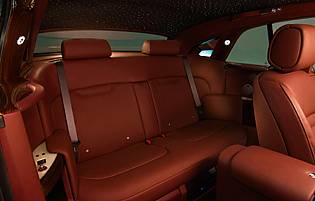 Following on from the established and extremely well received Phantom saloon and the stylish and versatile Phantom Drophead Coupe that most revered of luxury car manufacturers Rolls-Royce has completed the range with the Phantom Coupe. Boasting the same exquisite craftsmanship and high performance as its sister models, the Coupe is intended to offer a more involved driving experience.

A shorter wheelbase and greater rigidity from the handcrafted aluminium space-frame chassis means there's plenty to back up Rolls-Royce's claims that the Phantom Coupe is the most driver focussed model within the Phantom range. Coach-built using traditional methods it's as luxurious and expertly finished but with an additional sporty element for the keener driver.

The 6.75-litre V12 engine produces more than 450bhp, enough to propel the 2.5-tonne model to 62mph in a little over five seconds. Electronically controlled air suspension works alongside the tauter chassis to provide a sportier, more responsive feel and the steering is tuned for greater feedback. Pushing the 'S' button in the cabin changes the gearbox settings to hold on to ratios for longer, increasing performance.

With a sleek two-door profile the Phantom Coupe's exterior design belies its size. Like a pencil sketch made real the model gives little impression of its enormity making the enormous 21-inch wheels look normal in comparison. Inside the scale of the vehicle is much more evident, dwarfing the four occupants in space and luxury.

Standard specification boasts the finest quality materials and craftsmanship, but the customisable nature of the vehicle means anything is possible at the ordering stage. Refinement and ride quality remain high on the agenda despite the sportier dynamic meaning the Phantom Coupe is as comfortable to ride in as it is rewarding to drive.

Our verdict on the Rolls-Royce Phantom Coupe

The focus on a more dynamic feel fails to detract from the Rolls-Royce staples. Visually imposing but sleek and dynamic in appearance, the Phantom Coupe remains as refined and luxurious as the rest of the range. The super-smooth V12 offers effortless performance while the chassis and gearbox settings make the model's impressive relative agility exploitable in the utmost comfort.

Clearly, the Rolls-Royce Phantom Coupe is a considerable investment not only in terms of initial purchase price but also insurance and fuel costs. The highest level of after-sales service can be expected, but bespoke parts may mean maintenance will not be cheap although BMW Group parts will prove less costly and reliability should be extremely good. Depreciation will be dependent on specification, but there's generally more to lose with such a costly vehicle.

A voluminous interior means front and rear occupants are spoilt in terms of the space available. Head and legroom will suffice for even the tallest occupants. The boot is a very good size and the twin door rear portal serves as a picnic bench, too. Interior trinket space is limited, but a pull out tray in the front is a useful touch.

Tailored for ease of use, the Phantom Coupe offers a minimalist approach to controls. The iDrive unit is concealed with the central armrest and is efficient once mastered. It's really the only control element to be queried. Steering is speed sensitive and finger-light, the gear change effortlessly executed from the steering column and the parking brake push button operated. The switchgear itself is mostly beautifully crafted metalwork while heater controls take a user-friendly rotating dial approach. The instrument binnacle is clear and softly lit - a power reserve gauge replaces the traditional rev-counter.

Always the Rolls-Royce trump card, the Phantom Coupe is as relaxing a vehicle as you'll find. Everything is tailored to maximise the experience and the level of refinement within the cabin is eerie. The 6.75-litre V12 engine is whisper quiet, the ride perfectly smooth and wind and road noise almost completely eliminated. Huge seats envelop the occupants and even the head rests can be electronically adjusted. Umbrellas are even present in the door frames for the utmost comfort on exiting the car.

The basics are all covered in the Phantom Coupe, including remote central locking and anti-theft devices to help keep your investment safe. Keyless entry is an option but with a car of this value a sophisticated tracking device is worthy of some serious consideration.

There are airbags and three-point belts for all four seats while the car's space-frame structure is strong enough in its own right to protect from most impacts. All the usual electronic safety systems are also present, which is comforting to know in a car this big with the potential to carry a lot of speed.

The fact that Rolls-Royce has opted for a slightly thicker version of its huge three-spoke steering wheel suggests that it sees the Phantom Coupe as more of a driver's car. The gearbox has been tuned to hold onto gears for longer when the 'S' button is pushed to aid more spirited driving. The huge and powerful engine delivers stunning performance for a vehicle of this size and computer controlled air suspension means the Phantom Coupe corners and stops from speed with more composure than it has any right to. It can still only operate within the laws of physics, but what the 2.5 tonne model achieves in terms of driving dynamics is phenomenal. The model's size requires caution around town or on narrow country lanes, however.

Assuming parents are brave enough to let children loose on the Phantom Coupe's exquisitely crafted interior, the model would serve well as family transport for a wealthy foursome. The boot is a good size and the rear seats easily accessible.

The Rolls-Royce Phantom Coupe is among the most expensive vehicles money can buy, putting it far out of reach for the first time buyer.

Build quality and finish is impeccable, with the hundreds of man hours spent hand crafting the individual components shining through. From the carpets to the leather stitching to the gleaming paintwork, the level of craftsmanship is unsurpassable. As for image, Rolls-Royce is one of the best known and most exclusive brands in the world; the Phantom in all of its guises regarded as one of its finest products. Ownership of such a car clearly speaks volumes.

The Rolls-Royce Phantom Coupe's two suicide doors are designed for easy and graceful access to both the front and rear seats. They achieve this very well and, for a coupe, the rear seats are particularly simple to get to thanks to electric sliding front seats and a large portal. The doors can also be closed at the push of a button, sealing themselves softly once on the latch.

Again, audio and visual upgrades can be specified to the owner's requirements, however, the BMW Group iDrive interface is the hub of the Phantom Coupe's entertainment system as standard. Tailored to the Phantom the system has become more refined and easier to use with age although its menu based system can be a little frustrating at times. Sound quality from the standard system is impeccable, boosted by the silence within the cabin.

As always with Rolls-Royce, it's difficult to assess the Phantom Coupe's colour and trim options as so much can be decided by the buyer. What can be said is that the quality of the fit and finish is exemplary, exactly as expected from a largely hand assembled and finished process. Essentially, if you don't like the core range of materials on offer, you can specify materials to your taste. The only limiting factor is the size of your bank balance.

Naturally for a vehicle this expensive and well equipped, the Rolls-Royce Phantom Coupe features reversing sensors. A visual display monitoring obstructions also helps when reversing the bulky model. A small rear window helps little in terms of visibility and the Phantom Coupe's sheers size can make it awkward to manoeuvre in a restricted environment.