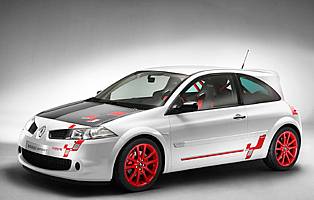 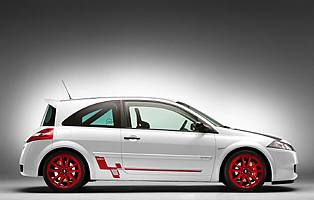 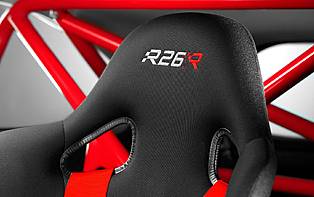 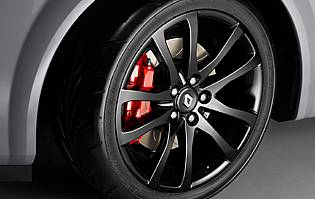 With a long line of impressive performance cars from the Renault stable, the French firm has decided to salute the end of the successful current generation of Renaultsport Megane models with the R26.R, a highly-specialised version optimised for track and fast road conditions which highlights the true capabilities of the car.

Available only in three-door last-generation form, the Megane R26.R is unmistakable in its intentions thanks to some obvious cosmetic and performance enhancements. Externally the differences are a black carbonfibre bonnet, sporty rear wing, race-style graphics (which can be deleted) and coloured alloy wheels.

The main changes are underneath the daring exterior, which amount to a comprehensive retuning of the chassis. Both the front and rear damping settings have been adjusted and new springs have been fitted with increased stiffness for the front and rear. Stiffer suspension bushes are also fitted, while the brake discs are grooved rather than drilled to improve heat resistance.

However, of possibly greater importance is the strict weight-loss programme that the Megane has undergone. 123kg has been shaved off the kerb weight, by removing a long list of components including the rear seats and stereo system amongst others. Also, the front seats have been replaced with lightweight bucket types, and the rear and side windows have been replaced with polycarbonate.

The R26.R can also be fitted with a rear roll cage, one of the few production cars that can be specified in this way, and this option also includes high specification tyres designed for maximum grip. Although air-conditioning comes as standard, climate control can also be specified, while the bucket seats can be fitted with conventional seat belts or a six-point race harness.

Our verdict on the Renault Megane Renaultsport Megane R26.R

The Megane R26.R is clearly a highly focused driver's car and succeeds in delivering the thrills expected of something so specialised. It is inevitably compromised as a result, and the loss of the rear seats does meant it is not so much a hatchback anymore, but the limited numbers available mean it is guaranteed to find enough fans to be sold out.

Despite a competitive purchase price, the costs of the Megane will be relatively high, given the likelihood of a high insurance cost and relatively poor fuel economy. This will be largely in line with many of its rivals, however, and is to be expected for a car of this performance.

The Megane uses its space well, with decent leg and headroom for passengers in the front. The boot is also roomy, at least without the roll cage fitted, and in this respect the R26R loses little of its practicality compared to more humble versions.

The simple interior layout of the Megane makes it an easy car to operate, with straightforward controls for the heating and ventilation. Between the main instruments is a useful information display, but the speedometer itself is a little confusing thanks to the crowded graduations. One further issue is the placement of some of the minor controls to the right of the driver, which are virtually out of sight and require the driver to peer around the steering wheel to reach them.

Because of the stiffer suspension, high-spec tyres and reduced soundproofing, the R26R is much noisier and stiffer than the standard car. It is comfortable enough for longer journeys but only an enthusiast would appreciate its qualities on a regular basis.

Remote central locking and the use of a key card, removing the need for an ignition barrel, gives this desirable car a high degree of security. Additionally, the R26R is fitted with an alarm system and automatic locking of the doors once on the move.

A high level of safety is a key feature of the Megane, and with a standard compliment of eight airbags, ABS and ESP it stakes a claim as one of the safest cars in the class. The improved grip and and brakes are also a safety feature, as are the bucket seats and harnesses where fitted.

As a pure enthusiasts machine, the R26R is exceptional. The engine provides superb acceleration, the handling is balanced and enjoyable and the brakes are sharp. The tyres deliver remarkable grip and there is no body roll, which makes the R26R a great companion on a twisty road. The downside to this is that the R26R is less well-suited to regular driving, although it is capable of everyday duties.

The R26R is likely to be out of reach for most first time buyers, thanks to the relatively high running costs and purchase price. Insurance is likely to be high for the inexperienced and, given the car's power and performance, it is unlikely to be a suitable car for novice drivers.

The overall feel of the R26R is good and the exterior design and detailing create a quality feel. Inside some of the plastics do let it down, however, so overall it performs relatively well, but not best in class. In image terms it trades on the series of excellent performance hatches released by Renault over a number of years, while the focused appearance does lend it a strong racing image.

With only two seats in the front, access to the rear is not possible. Getting into the front seats also requires care, as the high-sided bucket seats are low set. Access to the boot is easy through the wide tailgate, though the lack of rear seats means there is no partition to keeps objects in place.

The R26R is not fitted with a radio or CD player, nor is one available as an option.

Inside the Megane R26R has few luxury touches and is instead focused entirely on performance. The special seats and seat belts add colour and, although the standard dashboard is neat and efficient, it is functional rather than attractive.

The light steering and good forward visibility are an aid to parking, but the bucket seats make it difficult to look over the shoulder and parking sensors are not available.

Ford Focus  RS has superb engine and chassis, styling not to all tastes

Honda Civic Type-R is attractive and responsive, ride may be too firm for some