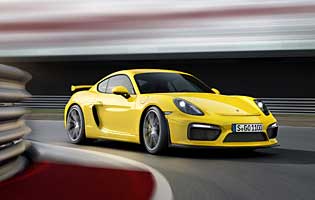 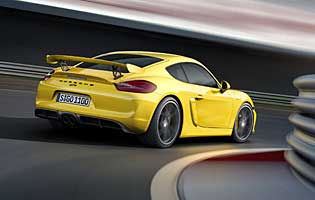 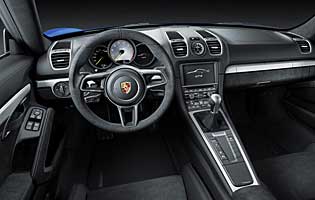 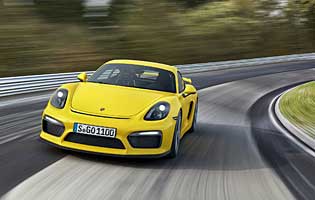 The Cayman is the often-overlooked gem in the Porsche range, offering 911-sized thrills for substantially less money. Now Porsche has taken it one step further with a track-ready version dubbed GT4. More extreme than any previous model, it has the potential to be the best Cayman to date for die-hard enthusiasts.

The 981 iteration of the Porsche Cayman not only answered all the criticisms of the original car but also moved the game forward to become the driver's first choice compact performance coupe. Prettier, faster and more comfortable than before, it could hold its own against the 911 and begged the question whether its bigger brother was really necessary.

However, the track-ready 'GT' badge has previously been the preserve of the 911, so it is something of a surprise that the Cayman has been turned into the GT4. As with the 911 GT3, sacrifices are made in terms of comfort and practicality in the name of performance, handling and weight reduction.

The Cayman GT4 owes a lot more than just its ethos to the bigger 911 GT3. The suspension setup uses many of the bespoke parts designed originally for the GT3, while the optional carbon ceramic brakes are of the same specification. The engine is taken from the 911 Carrera S, making this the most powerful Cayman ever made.

Inside the GT4 is broadly the same as the regular Cayman although there are detail differences. The steering wheel is 10mm smaller in diameter and soundproofing has been reduced in order save weight. The GT4 is also available with the Clubsport package which adds a rear roll cage, and carbon fibre bucket seats are also an option.

Our verdict on the Porsche Cayman GT4

All Cayman models are a pleasure to drive but the GT4 elevates the driving pleasure to stratospheric heights. Sublimely responsive, blessed with sharp, balanced handling and electric performance, the GT4 is as incisive a driving tool as anything costing less than GBP100,000. There are some practicality compromises required, but surprisingly few for a car with this capacity to thrill.

Although it is capable of coping with every day use the GT4 is likely to be an occasional car, mitigating somewhat the likely high fuel bills and servicing costs. However thanks to its scarcity the GT4 is likely to retain a high proportion of its initial value over the years.

A strict two-seater, the Cayman's cabin easily accommodates two large adults. The low seating positions mean that headroom is good for those of average height, while the door bins are useful lidded compartments that conveniently hide valuables from prying eyes. The rear engine layout means there's a deep space available in the nose, while the hatchback bodystyle allows for a reasonable amount of space aft of the engine compartment.

The Cayman's main dials are good, and there's the added bonus of a digital speedometer. The same ease of use is true of the centre console controls. Other thoughtful touches include front and rear boot releases down by the driver's seat, and the manual gearbox has a light and short gearshift. No PK dual-clutch automatic is available on the GT4.

Compromises in terms of comfort are required when driving the GT4. It is louder than the standard car due to the reduced sound deadening whilst ride comfort is reduced due to the stiffer suspension The carbon fibre bucket seats are hugely supportive although less comfortable than the standard sports seats on longer journeys.

Remote locking is standard on the Cayman, along with an alarm and immobiliser package. Porsche's factory-fit tracking system is not standard on the GT4 but would be a worthwhile addition for peace of mind.

Alongside the GT4's stronger brakes, bigger tyres and even its optional half roll cage, a range of intelligent traction and stability programmes offer a reassuring safety net. While you can switch them off for total freedom on, say, a racetrack, they offer a sensible balance between keeping you pointing the right way and allowing you the opportunity to safely exploit the car's abilities.

Over and above the thrills of the standard Cayman it is the GT4's sharpness that provides the most pleasure. The weighting of the major controls is excellent, although the clutch is heavy in slow traffic, while the responsive and powerful engine is a joy to use. Such is the GT4's tactile nature that it encourages the driver to be considered and accurate with their inputs to get the best out of it.

Although unlikely to catch out the unwary the Cayman GT4 is simply too powerful and expensive for a first car. It's controls also require more care than a conventional car in order for it to be driven smoothly, something which usually takes experience.

There's no doubting the quality of the Cayman GT4, with good materials used throughout and obviously solid construction. Even more impressive is the standard of the engineering which gives an unburstable feel. Porsche's image is one of the strongest in the sector, with a near-flawless record for producing high quality sports cars. The GT tag also has its own additional value.

Getting aboard the GT4 is a little more difficult than in a standard Cayman. Firstly, it sits 30mm closer to the ground and should you choose the optional carbon fibre bucket seats there is a substantial side bolster to be negotiated before sitting down. However, access to the front and rear luggage compartments is mercifully easy.

The standard set-up is a good one - although you don't get any steering wheel-mounted audio controls. The main colour screen is easy to use and can be improved with sat-nav plus a variety of connectivity options.

The Cayman's design suits a range of colours and with the extended bodywork of the GT4 version any colour decision is magnified in its impact. The Porsche palette includes subtle and vibrant shades as well as the option for custom colours. Inside the finish is mostly black with attractive Alcantara and flashes of brushed aluminium trim.

Sitting so low in the car and with the nose and tail of the car out of sight, great care is required when parking the GT4. The steering is manageable at low speeds but the track is wider than the standard car making the alloy wheels more vulnerable to damage. Rear parking sensors are available as an option.