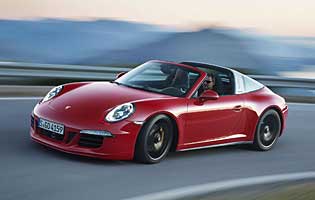 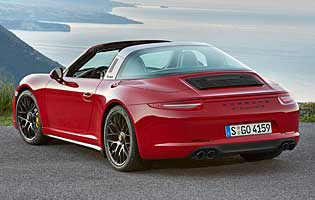 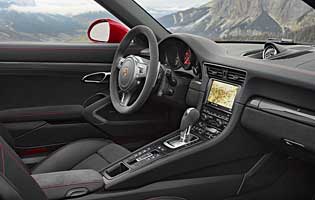 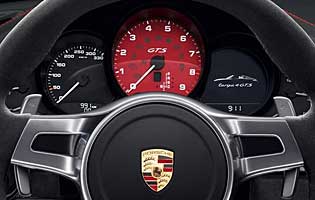 Recognising a gap between its regular 911 models and the high-performance GT3 versions, Porsche has modified and upgraded the coupe, cabriolet and now Targa versions of the former to create new GTS variants. The Targa, with four-wheel drive and the alluring electric roof as standard, is the latest and possibly most style-focused.

The GTS series of performance and luxury upgrades has previously been seen on the two more traditional body styles in the 911 family, and they are shared in very similar fashion in the Targa 4 GTS. A power upgrade is central to the model, boosting the 3.8-litre engine's output by 30bhp versus the Targa S.

Lower suspension set slightly firmer than cheaper Targas also signals the car's extra intent when it comes to lap times and high-speed handling. But there are many expensive add-ons among the equipment list that make the six-figure asking price seem relatively good value, including upholstery upgrades, special detailing and infotainment.

Part of the GTS range appeal is status, as members of a special sub-range of cars built, or so Porsche would say, for connoisseurs of the sports car; people who don't want the stripped-out intensity of the GT3 models but want something obviously more prestigious than the relatively commonplace 911 Carreras, Convertibles and Targas.

Black body detailing is common to the GTS models not just within the 911 stable but across the Porsche range. Sports exhausts are also included, which for the Targa involves re-routing the cabin noise-boosting sound symposer around the significant compartment needed to contain the glass roof when folded away. At its heart the Targa 4 GTS is a high-spec model, but its value for money is a real attraction.

Our verdict on the Porsche 911 Targa 4 GTS

All Porsche 911s are superb driver's cars and the latest generation of Targa has added a new dimension of style. The upgrades to the chassis make the GTS feel a little sharper and more involving, not to mention absolutely stable on the road. It still can't come close to replicating the thrilling feel of the GT3, which is a similar price, but it offers open-air driving as compensation.

This model's six-figure price tag is several thousand pounds more than the starting price of the 911 GT3, which for those buyers looking for performance kicks will make the Targa 4 GTS look expensive. However, when upgrading a Targa 4S it quickly becomes clear that the GTS is comparatively good value. Fuel costs will be expensive, but the PDK gearbox brings the car into a lower road tax band.

It is always surprising how much luggage can be packed beneath the bonnet of the 911 if you don't mind creasing your clothes, and there is a slightly larger space behind the rear seats as well. It is not a practical car and makes no pretence as such, but will be more than enough for long weekends away. It is not as practical an option as the 911 Convertible, though, whose rear seats can be used as expansive storage.

A row of five dials designed to mix grey and red to elegant and sporty perfection are the highlight of the instrument cluster, despite the overcrowded speedometer. Supplemented by an LCD screen and a comprehensive trip computer with many potential readouts they are amongst the most comprehensive and effective anywhere on the market. The seven-inch touch-screen is large and sharp enough, but can attract fingerprints too easily.

There is ultimately no escaping the lowered, stiffened suspension underneath the GTS, and on particularly patchy and broken surfaces the harshness of the ride can become a real irritation. On smoother bumps it copes very well, though, and its ability to soak up bumps improves with speed. The driver and passenger both feel cocooned in their sports seats, but the backs and bases are firm and eventually become uncomfortable.

Placing so prestigious a feature as the Targa's rear windscreen on a car could lead to vandalism, so the Targa, in attention-grabbing GTS colours, may be among the 911s that should definitely not be parked in high-crime areas. The combination of interior and exterior alarm sensors and an advanced immobiliser should prevent easy theft, though. Thieves will try to steal the key before stealing the car.

Large, premium brakes and tyres let the Targa 4 GTS stop much more quickly than a lesser car can, despite the extra weight of its complicated roof structure and chassis bracing. Porsche has also installed a wide-ranging array of active and passive safety systems that aim to prevent a crash, or, if one should happen anyway, to reduce the forces felt by the occupants. The cabin, for example, is surrounded by airbags that activate only in a serious collision.

The 911 is not the lightest or nimblest sports car, especially in Targa 4 GTS guise, but the trade-off is stability and rich levels of confidence in the car's abilities. Willing drivers can climb in and comfortably drive the GTS very quickly with very little acclimatisation time. It sounds beautiful thanks to sports exhausts, rides surprisingly well over all but sharp bumps and accelerates with real purpose through the lower gears.

While there are four seats, the rear pair are for occasional use only. Adults may not wish to attempt to fit into them at all, such is the lack of legroom, but smaller children should be fine for journeys of less than an hour or so. Folding the rear seats gives a little more room for, say, a compact folded pushchair, and the front passenger side airbag can be switched off.

As a desirable model the Targa 4 GTS could be close to the top of many new drivers' wish lists, but realistically it is far beyond the financial reach of an average first-time buyer. There are also safety implications to consider, both at low speeds where the Targa's restricted visibility can cause issues for the less confident, and at higher speeds where it offers many times the performance capabilities of a typical driving school supermini.

There are few sports cars that have such an enduringly desirable image as the 911, or so fervent a born-again following as the Targa. Its everyday usability is the 911 coupe's appeal, but the gratuitous dose of Mediterranean glamour is what defines the Targa. In terms of material quality Porsche has excelled, giving the GTS the finest leather upholstery installed perfectly.

Using firmer, sports seats and sitting two centimetres lower than the Targa 4 S upon which the GTS is based, it has become a significant drop down into the seats. Entering or exiting from a high kerb can be difficult even for the relatively young. The doors are long, too, and the necessary rearward placement of the seat belt holders means that it's quite a stretch to grab the belt.

Porsche's 'Sound Package Plus' is standard, incorporating nine speakers into the cabin and playing music via CDs, DVDs, USB devices, internal 40GB jukebox and radio. Drivers can also download the car's performance display data to a USB drive alongside the electronic log book. It is controlled through a touch-screen, which is easy to use at a standstill but not so simple on the move.

The Porsche 911 has a reputation as the best everyday sports car and many are indeed driven daily. The GTS version of the Targa, like its coupe and convertible alternatives, features a special red paint option with black detailing around light clusters, the engine bay and exhausts. Without going overboard it does look different to ordinary 911s. Inside the trim is exquisite quality and looks fabulous, with red stitching contrasting against black leather and grey alcantara.

The Targa 4 GTS's proportions are somewhat inflated when compared to the entry-level 911, thanks to the standard wide-body shape and the thick roll-over hoop that is a signature Targa feature. All this effectively reduces visibility and decreases the amount of margin for error when parking in standard bays. The wide chassis could make the wheels more vulnerable to kerb damage during parallel parking manoeuvres, too.

Mercedes-Benz SL AMG models are advanced, powerful and at the height of luxury