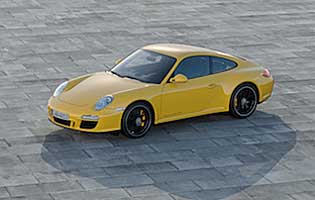 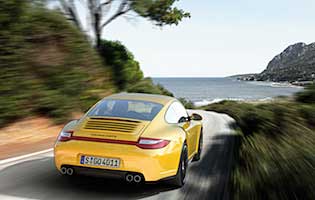 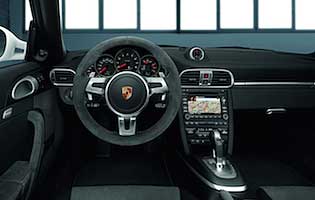 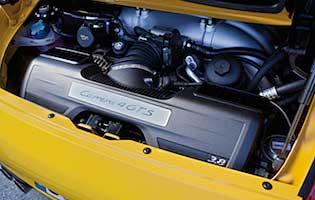 As is often traditional in Porsche circles, the impending end of a particular generation results in a special edition model as a final farewell. The GTS family is the 997 generation's last throw of the dice, and packs an enticing specification.

The 997-series Porsche 911 is already an exceptional performance car, offering the unmistakable silhouette which has remained a firm favourite with buyers without looking outdated.

In GTS guise the car is positioned above the regular Carrera and Carrera S variants, and is essentially a high specification non-turbo option. To ensure differentiation from the mainstream cars, the GTS uses the wide-body that appears on the four-wheel drive Carrera 4 model, giving it a 44mm wider body and an increased track for better traction and grip. And to maximize the car's wide-body potential, all-wheel drive can be selected alongside the purists' choice of rear-wheel drive.

Although subtle, the GTS differs from the regular 911 through a number of small details. Most obvious is the amount of black detailing, regardless of the main body colour. The 19-inch wheels have black spokes and the GTS also wears a black Sport Design bodykit, with side skirts plus front and rear aprons.

The mechanical changes will likely appeal more to keen drivers, with the power up a fraction over the standard 3.8-litre six-cylinder engine and changes to the intake system to boost torque at low revs.

Our verdict on the Porsche 911 Carrera 4 GTS Coupe

As run out models go the 911 GTS offers buyers a polished blend of visual appeal alongside and subtly enhanced performance. The power and torque gains might be modest, but the result is an even more tractable and rewarding driving experience. The black visual theme is a matter of taste, but there's no disputing this 911's performance attributes.

Don't expect the 911 to be a low cost proposition, although its efficient engines are better than most regarding fuel economy and CO2. Insurance, fuel and scheduled servicing will be your main concerns, while GTS trim should ensure a meaningful return on your investment come resale time.

Predictably front seat occupants have plenty of room in all directions. In the rear space is more restricted, and the seats are really only suitable for children - even adults will find it a squeeze. Storage space in the cabin is relatively good, although the front boot is only suitable for carrying a couple of soft bags.

The 997 generation of the 911 offers a good balance of clarity and ease of use for the driver. The main dials are an object lesson in clarity and the central infotainment display is both clear and intuitive. The steering offers plenty of feel and assistance, while the slick manual shifter will make you think twice about the need for the PDK auto option.

The car's seats are firm and supportive even over long distances. Noise levels are restrained despite the engine's performance potential. The standard sports exhaust comes with a dash-mounted button to increase sound levels when required too. The ride is firm, with only the worst potholes causing a major disturbance in the cabin.

With the sophisticated Porsche Active Stability Management system fitted the 911 in all forms provides very high levels of active safety, while the suite of airbags and tough bodyshell are reassuring should the worst happen.

In 'S' guise the GTS is a particularly rapid machine, although the flexible nature of the engine ensures power is delivered smoothly. It sounds good too and, coupled with the slick shifting transmissions, ensures you can remain relaxed when pushing hard. Factor in the advanced all-wheel drive system of the Carrera 4 variant and the already enhanced GTS specification affords owners a welcome all weather dimension to supercar ownership.

The 911 has never been regarded as not a family car, although it could carry two adults and children in a pinch. Insufficient boot space would be the key issue, as is access to the rear seats.

The 911 is much too powerful and expensive for a first car, even in its most humble of guises let alone GTS specification.

The 911 feels thoroughly engineered throughout, with the only demerit being the slightly flimsy nature of some of the minor switches. The 911's image is even stronger, remaining one of the most desirable sports cars ever despite strong competition, and its reputation as a superb performance car is well known.

The 911's two doors are long and open wide, and although the seats are low set, it is not a long drop down into them. You might find the doors a hindrance when parked in a tight space, though. Access to the rear does require the seat to be slid forward, although the limited amount of space available will likely dissuade people from trying.

With the optional Bose stereo system fitted, the 911 boasts a superb sound system. Steering wheel controls make it easy to operate, and unlike many cars these controls are small so they do not interfere during spirited driving.

Making the right choice is even more important with the GTS due to the black wheels and black detail to the body kit. The trim also comes with a mass of personalisation options including trim materials and colours to suit deep pockets.

Parking the 911 can be a little tricky thanks to its wide stance. Visibility all round is generally good, but the sloping rear can make it difficult to judge. However, parking sensors are available and make the task much easier.